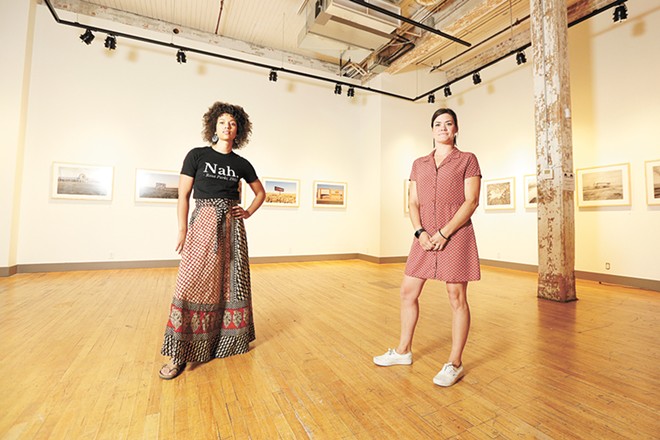 The web's been keeping us connected, but it's not an ideal alternative for most arts events.

Since the majority of festivals, gallery shows and fundraisers went on standby due to the coronavirus, arts organizations in the Inland Northwest have collectively lost hundreds of thousands of dollars in revenue.

Even though many groups' artistic happenings have transitioned online, the virtual sphere hasn't been able to fully replace the in-person art experience. Ticket sales, artwork purchases and cash donations generated during live events are the financial lifelines of most arts nonprofits. When COVID-19 paused gatherings in March, all that spending paused, too, impacting working artists in our community.

For Terrain, the Spokane-based nonprofit that runs a gallery, several one-day festivals, the From Here retail store and other ventures, Executive Director Ginger Ewing estimates COVID-caused losses so far total $360,000.

"It's really, really, really scary," Ewing says. "There is no other word that I can describe it as other than devastating. All the ways we generate income to pay rent and utilities and to get money into artists' pockets is getting people to gather."

Ewing says that figure represents funding lost from corporate sponsorships of Terrain's events, money which foots the bill of those events, as well as revenue generated by sales and donations at its flagship events including the one-night Terrain showcase in the fall and two artisan markets. Last year, for example, she says Terrain events directly generated more than half a million in art sales for local artists.

Bazaar, Terrain's outdoor summer market, was canceled this year after being postponed from June to August. With such short notice, there wasn't enough time to plan and replicate the market online through a virtual storefront, Ewing says.

She says there's also no possibility that the usual format of Terrain's popular, one-night art and performance showcase held most recently in downtown's Jensen-Byrd Building will be able to take place in early October. Instead of trying to replicate the event online or in a more socially distanced setting, Ewing says the Terrain team hopes to offer an alternative in some form, and plans to announce more soon.

"The general consensus is that while, in some regards, you can pivot and put things online, nothing is ever going to replace that face-to-face interaction and experience with art," Ewing says. "It's definitely not translating in terms of being able to generate revenue."

The current picture is similar for Emerge in Coeur d'Alene, which hosts classes, gallery shows and several large events throughout the year. Executive Director Jeni Hegsted estimates Emerge has lost $90,000 in revenue so far this year. Added to that loss is a fire that forced the nonprofit from its downtown space early in the year; Emerge is currently waiting for construction at its new home to wrap up.

Amid the setbacks, Hegsted says there have been some unexpected bright spots. The new space is bigger and more centrally located in Coeur d'Alene, and gallery shows should resume there at limited capacity late this year.

"It's definitely more than big enough to add all the different aspects of Emerge that we're anticipating," she says. "I think that makes people involved with Emerge hopeful and excited."

Although Emerge has paused all in-person art classes by transitioning some programs online, Hegsted says a popular alternative for students is to rent pottery wheels for virtual lessons at home. The change allows for more hands-on practice with the equipment than would usually be available at its studio.

While the nonprofit's annual INK! Print Rally held a few weeks ago was closed to spectators, an event Sept. 30 still offers a chance for the community to engage via a drive-in documentary screening of footage captured the day of printmaking, the unveiling of prints created this year and a chance to purchase the art.

"I think it'll be really popular, but it's really challenging to figure out how to engage people and have these events still," Hegsted notes.

It's the small victories keeping arts organizers optimistic as they weather the COVID-19 storm.

Auntie's Bookstore, for one, has moved all of its usually in-store author readings to Zoom, which has simultaneously allowed it to host authors who otherwise might not visit the area in person, pandemic or not.

"Now that travel isn't a logistic we have to concern ourselves with, we are able to pair authors in really exciting ways," says Auntie's Events Coordinator Claire Davey. "It's exciting to me, too, because these events feel really intimate. Being able to see authors in their homes, they tend to be more casual, too."

To encourage virtual reading attendees to support the store, some of the events are ticketed by requiring the purchase of a featured guest's book. (Auntie's continues to offer curbside pickup and shipping.) Most events, though, are free.

"We're still working out how to make this work on the business end," Davey says. "Book sales [tied to events] have just honestly not been very good. I think a lot of that has to do with the charm of a book event and getting in line to get your book signed and get a few minutes of facetime with the author."

Museums around the world have gotten creative with online programs and virtual exhibits, too, but nothing beats seeing a 2,000-year-old artifact up close and in the flesh.

Fortunately, the Northwest Museum of Arts and Culture — closed to the public for five months — was recently able to reopen under newly issued state guidelines for three final weeks of the blockbuster exhibit Pompeii: The Immortal City.

Museum Executive Director Wesley Jessup estimates the lengthy closure this spring and summer amounted to $250,000 in losses from admissions and program fees for MAC programs. The museum also had to lay off four full-time staff members. To help make up for some of its losses, the MAC successfully raised $75,000 through a mostly online fundraising campaign.

"Pompeii had the most visitors we ever recorded for February, so it was definitely set to break a lot of records," Jessup says.

For Pompeii's brief reappearance, the MAC welcomed about 3,600 visitors even as its galleries remained at 25 percent capacity, with admission offered through timed reservations.

While the museum lost thousands of visitors during its forced closure, Jessup says online programming, from livestreamed lectures to kids camps, offered in the interim was more successful than staff anticipated.

"We had a really healthy participation, so we think the community has been tracking what's going on and what we have to offer," he says.

For Terrain, an unexpected win despite the pandemic's uncertainty came in the form of extra time available to its team to photograph and list the complete inventory of locally made goods sold at From Here in an online storefront. Items have since been shipped to customers across the country.

"It took three people six weeks, and in normal times we wouldn't have the capacity to do that," Ewing says. "COVID forced us to have an online presence and now that's in place, it's something we'll always do moving forward."

Terrain also just wrapped up an online auction and art show, raising $30,000 to cover rent and operating costs of its gallery space for the next year.

"While things are so bleak, we are so grateful for people who've rallied around us," Ewing says. "The Spokane community continues to shine in all of this." ♦