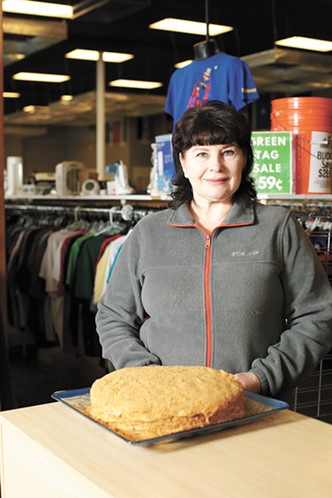 Diners can take a multicultural trip around the globe in just one evening.

Featuring flavors from the Middle East and Eastern Europe — along with sounds from Latin America — the Dine Global, Partner Local dinner on March 10 is raising funds to support local nonprofit Global Neighborhood's job readiness program, which provides newly arrived refugees with skills to succeed in the American workplace.

One of many Spokane-area refugees supported by the program is baking a traditional Russian honey cake, made with stacks of ultra-thin cake layers between frosting.

Svitlana Negodaieva left her home in Ukraine in September 2015. Since arriving here, she became employed at the nonprofit's central Spokane thrift store, where she currently works as a cashier. Negodaieva was taught how to bake by her mother and grandmother.

"We came to Spokane because my sister lives here," Negodaieva says of her family. Just a few weeks ago, she was happily reunited with the last of her four children, a daughter who waited five years to start her own life anew in the U.S.

"I have been working at Global Neighborhood almost three years," Negodaieva continues. "I started to speak English there. It's a big help for me. I [now] have a lot of friends — American friends — in Spokane."

Negodaieva has also made her prowess for baking known amongst Global Neighborhood's staff and program managers, says Jen Landis, director of the nonprofit's job readiness program who's helping coordinate the upcoming dinner.

"I can testify to several of Svitlana's cakes," Landis says. "I've never had cakes like that until she started bringing them. They are unique and so delicious."

Before guests get to enjoy this exquisite dessert, however, they'll be treated to a meal of Syrian-influenced ingredients and flavors, prepared by Syrian refugee and chef Nabil Alzouabi along with Dan Todd of the local takeout kitchen Inland Curry.

Alzouabi came to Spokane in August 2016, having fled his home in wartorn Daraa, Syria, leaving all of his former life behind him, including a successful restaurant. He's not currently working in the restaurant industry, but dreams of opening his own eatery in Spokane serving authentic falafel, hummus, kabobs, shawarma and more.

Alzouabi may not have his own restaurant yet, but still finds ways to share his love of Syrian cuisine with his new community. The chef partnered with Todd in January to prepare and serve a Syrian meal for Inland Curry's monthly International Dinner Series. Despite the language barrier between them, the two cooks found common ground in their shared love of food.

"Nabil has a charming confidence in the kitchen, almost a swagger," Todd says, smiling. "It was fun to work side by side with him. He has a relaxed demeanor in the kitchen and I don't — I get really stressed out. He clearly loves food and loves to cook. He kept saying 'Try this, try this.'"

The Global Neighborhood benefit is set to feature many of the same dishes he and Alzouabi cooked together then: fattoush, a Syrian salad with greens and khubz, an Arabic flatbread, along with kabobs, falafel, hummus, rice dishes and shawarma, marinated meat often served in pita bread, similar to a Greek gyro.

"I'm trying to find more ways for people like Nabil to cook their food, so people can try their food and the chefs can make some money."

Food will be served family style at two long communal tables. The dinner begins with a cocktail hour and appetizers, and local musician Nic Vigil of the Latin music group Milonga entertains with live music.

Though the Dine Global event quickly sold out all 50 tickets, Landis hopes to host similar benefit dinners for Global Neighborhood in the future. In the meantime, local diners seeking authentic international flavors prepared by refugees like Alzouabi and Negodaieva should follow Inland Curry on Facebook for updates on future collaborations for its International Dinner Series.

"I'm trying to find more ways for people like Nabil to cook their food, so people can try their food and the chefs can make some money," Todd says.

"I think what Global Neighborhood does and the International Dinner Series go well together," Landis adds. "[Dan] is offering cooking opportunities for chefs who are refugees who want to be cooking and they get paid, and we offer job training programs." ♦

The original print version of this article was headlined "International Invitation"

Afghans who escaped the Taliban hoped they'd join family in places like Spokane, only to get stuck in a Dutch refugee camp instead