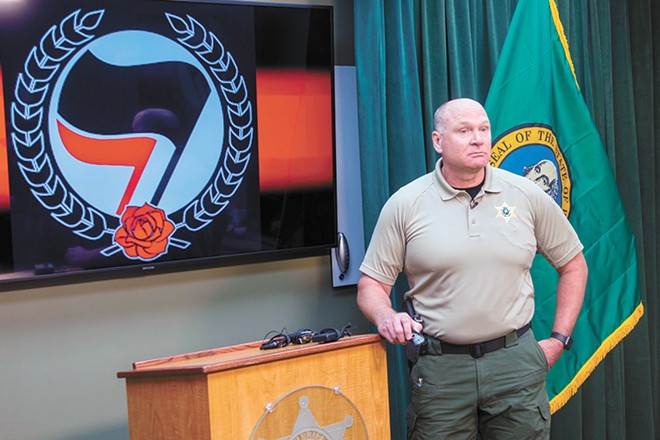 Spokane County Sheriff Ozzie Knezovich stood before a small cadre of local reporters to insist that the arrest of Jeremy Logan, a vocal critic of police, was completely above board.

After failing to find Logan earlier, sheriff's deputies arrested him on his way to a Black Lives Matter rally on Aug. 30 and had him taken to jail based on a 7-year-old warrant for failing to pay fees related to a nonviolent drug charge in another county.

Yet even as Knezovich hit back against a Huffington Post article suggesting that the arrest was politically motivated — Logan is co-chair of Spokane Democratic Socialists of America — the sheriff's press conference on Sept. 8 revealed that the old warrant wasn't the only reason Logan had been targeted.

Slide by slide, Knezovich showed the reporters examples of Logan's posts. He highlighted Logan's shirtless selfie where he was holding a machete. He pointed to a post with anti-cop rap lyrics and a profile picture where Logan proclaimed himself "Always Antifascist." He displayed a picture of Logan outside the abandoned Seattle Police precinct in the "Capitol Hill Autonomous Zone."

Knezovich scoffed at Logan's claim that he hadn't posted anything threatening, pointing to posts where the DSA leader wrote things like "if you don't like riots and calling cops 'pigs,' GET OUT OF MY COUNTRY" and "I want to take these pigs' heads off with a hacksaw."

Knezovich didn't claim that the statements were illegal. Still, he explicitly cited Logan's "increasingly violent rhetoric" as one of the reasons why Logan had been arrested.

That admission raised a whole host of other thorny questions. Was the Sheriff's Office looking into the social media accounts of other local activists as well?

"If you're going to be throwing protests, we look at everybody," Knezovich said. "Left, right or indifferent."

But civil liberties advocates like Jennifer Lee, technology and liberty program manager for the ACLU of Washington, say that's a problem. Even though much of what people post on Facebook and Instagram is public, Lee says most Americans don't reasonably expect the police to be tracking them.

"The police shouldn't be surveilling protesters of any kind and chilling anyone's fundamental constitutional rights to free speech," Lee says. "We're concerned that it'll increase disproportionate scrutiny of communities of color and other over-surveilled communities."

PERSECUTION OR PROTECTION?
The ACLU has been raising alarm bells about cops using social media to conduct surveillance for years: Lee says the ACLU obtained records showing that, in 2015, the Washington State Patrol had signed a contract to "search and analyze real time social media" with GeoFeedia, a company that was processing a firehose of social media data for law enforcement agencies across the country.

Some agencies, it turned out, were using the tool to monitor Black Lives Matter activists. In 2016, the Seattle Police Department ended up being investigated by their civilian watchdog for failing to get permission from the City Council before contracting with GeoFeedia.

Today, however, the Washington State Patrol says it's not using GeoFeedia or any other social media monitoring tool. WSP spokesman Darren Wright says the agency has strict rules: They only track someone on social media if it's related to a specific criminal investigation or an explicit threat.

And if the criminal investigation might intersect with political or religious issues, he says the agency has to get a special approval process from the director to make sure any social media surveillance wouldn't run afoul of the First Amendment.

Those kinds of guardrails are crucial, argues Dave Maass, senior investigative researcher at the Electronic Frontier Foundation, a civil liberties organization focusing on the internet.

"There should be a higher scrutiny and layer of approval before you can start investigating people engaged in protest," Maass says.

But in Spokane, neither the Police Department nor the county Sheriff's Office have outlined any explicit policies constraining when they track social media posts. Instead, both suggest it happens all the time, particularly around protests.

Spokane Police Department spokesman Terry Preuninger says that deciding how many officers to bring to a protest and other major events requires a combination of human intelligence and trawling through social media.

"You can't believe the volumes of people's social media that we have been sifting through with these sorts of things, looking into [people] and then who their associates are," Preuninger says.

While the department won't scrutinize every attendee's identity, he says, they do concentrate on the groups and individuals who are organizing it.

"It's called doing our due diligence," says Knezovich. "[What] if we didn't and, say, the next person is the person who puts a bomb in our community?"

He's alluding to Kevin Harpham, the Stevens County man who posted over 1,000 times on a white supremacist message board under a pseudonym before attempting to bomb Spokane's Martin Luther King Day parade route in 2011.

In the last half-dozen years, Knezovich has frequently pointed to screenshots of social media rhetoric from local far-right groups — including those allied with Spokane Valley's Rep. Matt Shea — and argued that if violent acts were committed against his deputies in the future, their anti-law-enforcement rhetoric was to blame.

But today, with Knezovich railing against far-left activists and the "antifa" movement using similar arguments, Logan claims that it's Knezovich's own rhetoric that is reason for alarm.

"Because he thinks that anyone who seems to be opposed to fascism is a potential terrorist, it's a serious problem that he's going through people's Facebook posts," Logan says.

COPFISHING
The Sheriff's Office argument is simple: If your post is public, it's fair game.

"If you're posting it on the internet, you have no reasonable expectation of privacy," says Mark Gregory, Sheriff's Office spokesman. "If it's out for everybody else to read, it's out for any of us to read."

But in the case of Logan, there's another tension: That Facebook post about cutting pigs' heads off? That wasn't public. The post was only visible to Logan's Facebook friends and the Sheriff's Office won't say how they obtained the screenshot.

While Gregory says most intelligence they get comes from tips from the community, when asked if the department uses fake Facebook accounts to gather additional intel, Gregory declined to say.

"We would use any legal investigative means possible to do their jobs and keep the community safe," Gregory says. "We're not going to sit and say how we do it."

The Spokane Police Department is more upfront. Preuninger admits he himself uses a fake Facebook account to check social media.

And Spokane Police Lt. Rich Meyer sat down with the Inlander to detail how he created a fake Facebook profile in 2009 as part of his work for the Spokane Regional Drug Task Force.

Meyer says he pretended to be a 39-year-old female Northern Quest Resort & Casino card dealer who was originally from the Los Angeles area. He used a far-away, blurry Google Images picture of people sitting in a bar for his profile pic, uploaded a couple pictures of Los Angeles and some beer into his timeline. Then, he started making some targeted friend requests. All he had to do was lurk in the background and watch, as suspects eagerly incriminated themselves.

"They would do what they call 'flossing,'" Meyer says. "They would show pictures on open source media, of them holding up tens of thousands of dollars. Holding up guns."

For around four years, he took thousands of screenshots. Ultimately, many of these screenshots became part of a massive multi-agency operation dubbed "Piranha Slayer" that resulted in 62 indictments of suspects in Spokane, Las Vegas and Los Angeles.

And while the arrests could have been made without his social media surveillance, Meyer says the screenshots were "huge" when it came to sentencing.

In the summer of 2015 in Memphis, Tennessee, a Facebook account with the name of "Bob Smith" claimed to be a person of color — and totally swore he wasn't a cop. Turns out, he was a white police officer named Timothy Reynolds who used the account to monitor Black Lives Matter and other local social justice protests.

In Memphis, that was a violation of a 40-year-old consent decree banning the government from collecting "political intelligence" on non-criminals.

While the police say they're focusing on violent protesters, Maass argues, the peaceful folks get caught in the crossfire.

"I don't think layering on privacy violations to the peaceful protesters is the way forward," Maass says.

In Spokane, it isn't just selling drugs or organizing protests that can cause police to eye your social media page: It's talking to the press.

"One of my intel people, the day the article came out, sent me a link to your story," Preuninger told the Inlander in a June interview. "And then he sent me her Facebook page."

Her Facebook cover photo, Preuninger said, was a screenshot from the movie V for Vendetta with the caption "can't destroy a government on an empty stomach."

While he says it wasn't enough to draw conclusions, Preuninger argued that it undercut Lewis' portrayal as an innocent protester.

"The fact that they tried to discredit the account that I had on the street by highlighting a meme I found on Facebook?" Lewis says. "I was tickled."

By now, many activists are well aware that their social media accounts are being watched — and not just by the cops, but in the public.

Kurtis Robinson, Spokane's NAACP chapter president, says that activist leaders emphasized how much scrutiny they're under in this political climate. But while he himself has forwarded threats to the law enforcement to investigate, he stresses that the police have a responsibility to provide protection without falling into the trap of over-policing.

"That's been a difficult thing in the past for them to actually do so in a fair and equitable fashion," Robinson says. ♦