Denzel and Captain Kirk are all that stands between us and deadly choo-choo trains. 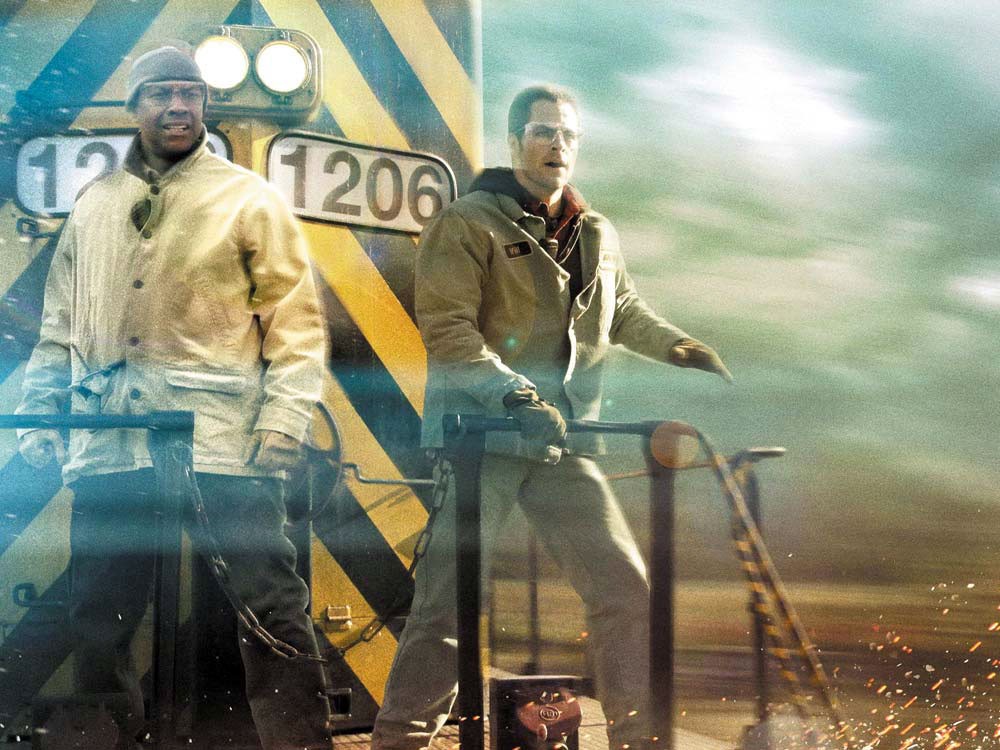 When a head-on collision looms, stand at the front of the train.

You don’t really get a lot of good runaway train movies these days. The last great one was Runaway Train, back in 1985. But veteran action director Tony Scott breathed some new life into the genre with this full-throttle potboiler about an unmanned half-mile-long train loaded up with some gnarly chemicals and barreling its way through rural Pennsylvania, just itching to dump its 30,000-gallon load on townsfolk.

But the train isn’t some kind of monster. It’s misbehaving due to human error — some stupidity and laziness. And those townsfolk aren’t exactly unsuspecting. News outlets are all over the event, with choppers flitting back and forth in the skies, pumping out video and garish graphics. And everyone else is yakking away on their cell phones. Put those two components together, and you have throngs of people standing by as the train whooshes through their town, every one of them holding up a phone to get a good shot.

Of course, a runaway train movie wouldn’t be of much interest unless someone was trying to stop the darn thing. So we’ve got the mostly cool and calm train traffic coordinator (Rosario Dawson) coming oh-so-close to nipping this thing in the bud early on. But there’s also her bean-counter boss (Kevin Dunn), feverishly prioritizing things the way most bad bosses do in movies: Should we save company property or should we save half the population of Pennsylvania?

But let’s not forget our heroes: Old pro driver Frank Barnes (Denzel Washington) and young pup conductor Will Colson (Chris Pine, Star Trek) are on a different train that’s chugging along the same track as runaway No. 777, with both locomotives headed toward each other.

The tension ratchets up quickly, aided by a loud and enormously percussive soundtrack. Trains zoom right at cameras; the cameras fly  alongside, above and below the trains.

The script is packed with terminology we’ll never need to remember. (Go ahead: Just try to work “dead man’s brake” into a water cooler conversation.) But it also tosses around some great questions: Can Frank and Will stop bickering long enough to get their train into a clearing in time? Can the runaway be stopped before it reaches an elevated S-curve that will send it and its freight flying into a gaggle of big gasoline tanks?

The briskly edited film roars along as fast as the train, piling tension upon tension and inventing new problems every time a solution is reached. Unstoppable may be preposterous, but it’s a hell of a ride.