A deeper look into the Spokane Police Department's leak investigation

Young Kwak
If not for an internal leak, it's not clear whether the public would have known about the behavior of one SPD officer, which Police Chief Craig Meidl called "atrocious."

trying to identify whoever tipped off a local blogger to the existence of an embarrassing video showing an SPD officer hurling profanities at a handcuffed suspect. Internal Affairs detectives interviewed fellow officers, scanned emails and reviewed printer logs in what ultimately was a fruitless effort to unmask the culprit, according to recently released police records.

The fact that the department expended such effort in retracing the leak that revealed the unseemly body-camera footage — itself a matter of public record — has some worried that SPD is walking back its commitment to transparency.

"For me, the public has a right to know where their tax dollars are going, what services they're getting," says Joe Walker, an SPD lieutenant who retired earlier this year. "Just take your medicine now, and get it out there. Those are easier to explain, and the public will believe and trust you more. But the minute you start leaving doubt out there, everybody is going to ask, 'What else have you guys hidden?'"

The department's leak investigation follows an earlier decision to quietly scrub SPD's website of internal investigations, which contain details of officer misconduct and how the department handled them. Officers and citizens had complained that their names appeared unredacted in those documents, Assistant Chief Justin Lundgren explained to city council members in February. Reviewing each file — some of which are a few hundred pages long — would take too much time, he claimed.

In a previous interview, SPD Chief Craig Meidl said these decisions were not a matter of conspiracy or secrecy, but are due to a lack of resources.

"Right now our level of transparency is limited by staffing," Meidl said. The department has lost at least two clerical employees since former Chief Frank Straub left the department in 2015, he added.

Officer Chris McMurtrey thought the issue of him berating a suspect was finally behind him.

Back in January of 2016, he wrote a letter to his supervisors taking responsibility for goading the man handcuffed in the back of his vehicle. McMurtrey faced no formal discipline for the profane back-and-forth, but he was put on desk duty and removed from the SWAT team — a coveted position.
click to enlarge 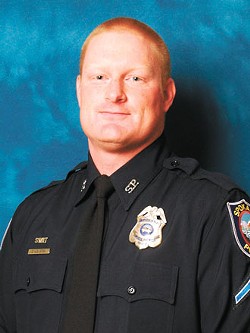 "To be blunt, I wish to take my lumps and move on, recognizing that I may face department punishment," McMurtrey wrote. "I will take steps in the future to ensure this does not happen again."

By February 2016, the case was closed, and the only documentation of the incident on SPD's website was a brief summary, which City Councilman Breean Beggs called "pretty tame" compared to the body-camera footage. McMurtrey's name is not mentioned in the summary.

The incident stayed quiet until local blogger and police gadfly Brian Breen received a portion of the full investigation. He then submitted a public records request for the rest.

To his credit, Meidl called a news conference in February 2017 denouncing McMurtrey's behavior, calling the interaction "the most atrocious demeanor I've seen in my career."

"This incident points out that when you have a policy that doesn't support transparency, it's easier for people to justify leaking," Beggs says. "The real solution in this case is to go back to prior policy, which is to post all IA investigations online to restore the public's trust."

Currently, the SPD website indicates that there were 50 internal investigations initiated in 2016.

Twenty-six summaries of the incidents, including allegations against the officers and a description of how administrators handled the situation, are posted. Details of the remaining 24, and an additional seven cases obtained by the Inlander through a public records request, are not published. Documents obtained through the records request indicate that SPD initiated at least 78 internal investigations in 2016.

At least 10 complaints initiated in 2016, ranging from disrespectful interactions to ethical violations, were sustained. One of those, a summary of which is not posted to SPD's website, is the case against Sgt. John Gately.

In that case, Gately, the former Spokane Police Guild president, was accused of tipping off a fellow officer, Gordon Ennis, who was the target of a rape investigation. In a phone conversation, Gately told Ennis that Spokane County Sheriff's detectives were writing a search warrant to collect Ennis' DNA. When detectives showed up to serve the warrant, Ennis' fingernails were clipped.

Meidl sustained the allegations, and disciplined Gately with four months of unpaid leave.

Walker, who reviewed the case before his retirement, wrote an addendum expressing his disgust over how multiple administrators handled the situation.

"There are other concerns I have regarding the supervision and handling of this incident at a command level," Walker writes. "The need for transparency and expectation from the public for the Spokane Police Department to be legitimate is extremely important. There were several errors in judgment or intentional acts committed that either hampered or compromised the Spokane County Sheriff's Office investigation."

The investigation into Gately is not posted to SPD's website because some of the details are tied to Ennis' ongoing criminal case. The rest are part of a backlog and are waiting to be summarized, says Michele Anderson, the city's public safety communications manager.

From Beggs' perspective, these recent examples

emphasize the need for a uniform policy directing the department how and when to publicly release examples of misconduct. The leak investigation, he says, only undermines notable efforts that SPD is taking to be transparent and accessible.

For example, police executives regularly show up at community events and neighborhood council meetings. Coffee with a Cop events offer opportunities for the public to get to know the officers, and familiarize themselves with police work. There are also citizens' academies and the Spokane Police Athletic League. The department publishes crime statistics and has released an unflattering study about its officers' disproportionate contact with minority suspects.

"It wasn't a true cover-up or anything," Beggs says, referring to the leak investigation. "They were trying to do what they thought was best, but it didn't turn out to be the best thing for the public — and for the department. It's sort of an unforced error."

"I think as long as I worked there, there have always been people leaking information," Walker says. "They've got to know deep down this is not going to stop people from talking." ♦