Local skaters aren’t giving up on improvements under the freeway 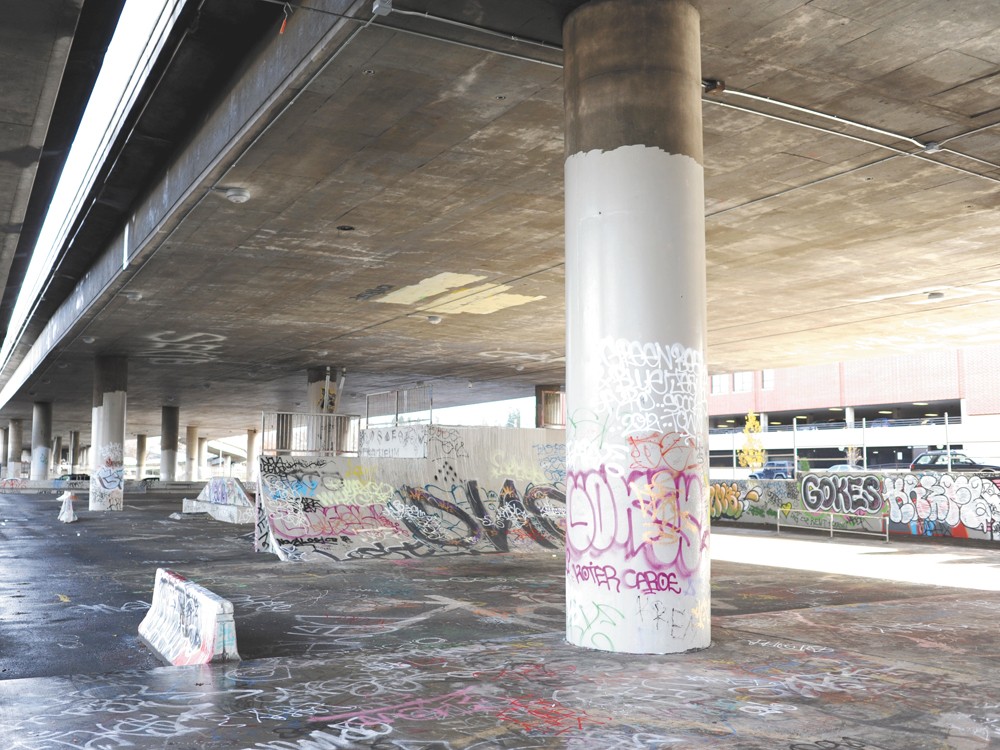 Christian Wilson
Skateboarders want the city to renovate the skate park under I-90 downtown.

Back in early November, local skateboarders were just two days away from seeing a design firm’s plans to revamp the Under The Freeway skate park in downtown Spokane. Now they could be years away.

The Spokane Parks Department said earlier this year that it planned to spend $300,000 left over from a 2008 sports bond to renovate the park. They hired Grindline, a Seattle-based skate park design company, to plan the overhaul. This fall, though, the Park Board put that plan on hold, worried it might not be the best way to spend that money. (The Parks Department isn’t authorized to spend more than $45,000 without the board’s approval, says Facilities Maintenance Supervisor Aaron Champagne, who’s overseeing the project.)

Joel Barbour, a local skater who’s helping organize supporters, says he’s been going to Under The Freeway (UTF) skate park since he was a kid. The park is important, he says, because it’s accessible in any weather and because it’s historic.

“Think of Spokane — what do we have that’s iconic?” he says. “The pavilion, the clock tower. For skateboarders, [UTF] is what we think of.”

Greg Connolly, a 40-year-old skateboarder who was part of the department’s original design oversight team for the park, will speak on behalf of the skating community at a Park Board meeting Dec. 13. He calls Spokane skateboarders “a marginalized community” the city doesn’t want to support.

But Park Board President Randy Cameron insists board members don’t have any problem with UTF. Instead, they’re worried it’s in the path of big changes from the city or the state transportation department. The park, under I-90 near McClellan and Fourth, is on the edge of the Division Street Gateway Project, a plan to improve one of the main entrances to the city. The project has been around for three mayors’ terms without much progress, but Cameron says board members believe it will come to life under Mayor David Condon.

“I can’t see anybody being mad that we don’t go forward knowing it’s at risk of changing dramatically or being destroyed,” Cameron says. “Would you build a home on property that you don’t know what its short-term future is, let alone its long-term future?”

For now, Cameron says the board has asked the Parks Department for a list of projects that could use the $300,000, with an emphasis on safety improvements. The board will get that list at the end of the year and use it to budget next year’s work, which could leave out any mention of UTF. The roof of the Looff Carousel in Riverfront Park could top the list, he says.

But Connolly still plans to make his argument for the skate park. Not only is he skeptical that Condon will be able to make progress on the gateway project, but he thinks decision-makers are missing a bigger point. Good skate parks draw visitors the same way other outdoor recreation facilities do.

Says Connolly: “I think [the Park Board is] a little bit short-sighted as far as what the skating community can bring to the rest of the community.”