News from the shooting that shocked a nation 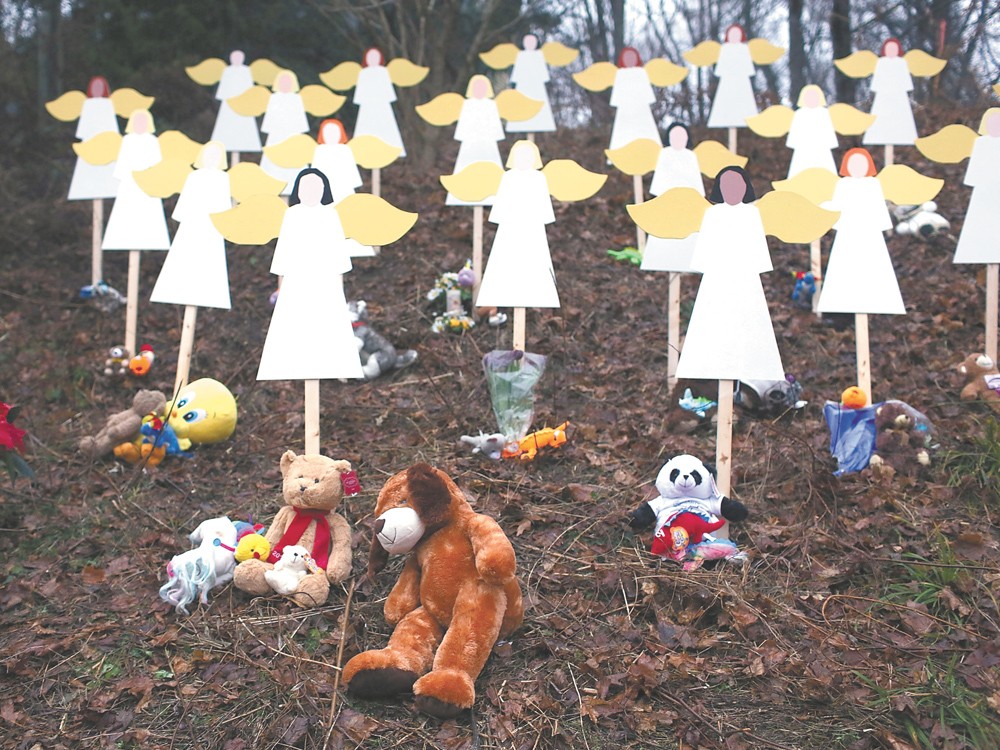 Spencer Platt | Getty Images
Twenty-seven wooden angels stand in a yard down the street from the Sandy Hook School in Newtown.

THE MEDIA: Getting Everything Wrong

Ryan Lanza was not the shooter. His brother was.

But thanks to a law enforcement official leaking incorrect information to the press, media outlets rushed to report Ryan as the killer. When online news outlet Buzzfeed published screenshots from Ryan’s Facebook profile, his face swiftly spread from news outlet to news outlet. In Spokane, KREM 2 tweeted the picture under the title “accused shooter Ryan Lanza.”

Almost immediately, multiple hate groups on Facebook formed to tell Ryan to “rot in Hell.” An Oregon political cartoonist, Facebook friends with Ryan, found himself swarmed with messages asking how he could be friends with such a monster or if he’d help compile a psychological profile of the killer.

In other words, the face of an innocent man, who had just had his mother murdered, was plastered across the Internet as the perpetrator of one of this nation’s worst school shootings.

Ryan insisted on his Facebook page that “IT WASN’T ME I WAS AT WORK IT WASN’T ME.”

Slowly, media outlets began to correct themselves. “We apologize. We sent out a pic previously of a man accused in the shooting. We took it from natl CBS coverage, where take much news,” KREM 2 wrote on Twitter.

Yet, the shooter’s identity wasn’t the only big mistake: The magazine The Nation outlined 12 major facts media outlets got wrong, including claims the shooter had killed his father (he’s alive), that the mother worked at the school (she didn’t) and that the children killed were kindergarteners (they were mostly first-graders.)

Tragedies like these almost always begin with bad initial reporting: The massacre at an Aurora, Colo., movie theater led CNN reporter Brian Ross to speculate the shooter was linked to the Tea Party, while other media outlets incorrectly pronounced Arizona Congresswoman Gabrielle Giffords dead after her shooting.

Other media debates cropped up: Is it ethical to immediately interview traumatized children? Does publishing in-depth coverage of the shooter turn him into a kind of twisted celebrity, spurring more shootings? But in the days since the shooting, many media outlets have devoted space to asking how they got so many important facts wrong.

“In the Twitter age, the pressure is worse than ever to be fast — it’s become more difficult,” said Greg Brock, senior editor for standards at the New York Times, in an interview with his public editor.

The horror of the Newtown massacre immediately catalyzed demands for more gun control. But it also has led to cries for a better mental health system.

A recent Mother Jones investigation found that in 38 of 61 of major mass shootings, the shooter had signs of mental illness. The shooter of Arizona Congresswoman Gabrielle Giffords and the gunman at Virginia Tech both showed disturbing signs before carrying out their massacres.

Details are still hazy about the mind of the Newtown shooter, but some reports of his friends indicate he may have had Asperger’s syndrome, a mild form of autism that can make social interactions difficult.

President Barack Obama, in his speech in Newtown on Sunday, promised that he would be talking with mental health professionals in the search for “meaningful action” after the shooting.

A law already requires states to share names of mentally ill patients with a federal database, preventing certain types of the mentally ill from owning firearms — yet an Associated Press investigation last year revealed that a number of states, including Idaho, failed to submit a single record.

In the aftermath of the shooting in Newtown, many observers seized on the reaction from a mother from Boise.

“I live with a son who is mentally ill,” Liza Long wrote. “I love my son. But he terrifies me.” Her 13-year-old-son had threatened to kill her with a knife over an argument about overdue library books. She lamented the lack of options available, wondering whether to have him charged with a crime to keep her son safe and others safe from her son.

But the types and effects of mental illnesses can be extremely broad. In a CBS news report, Lori Shery, the president of the Asperger Syndrome Education Network, worried that Asperger’s syndrome would be scapegoated for the atrocity. Asperger syndrome has never been shown to lead to violence.

“It’s very important not to stigmatize those who have psychiatric issues,” psychiatry expert Renée Binder said in a Commonwealth Club discussion about gun violence on Nov. 1. “Most people who have a mental illness are not violent.” In fact, she said, 95 to 97 percent of the time, violent acts have nothing to do with mental illness.

During tragedies like this one, it’s not unusual for the debate over gun control to bubble to the surface and for leaders to promise action. That’s as true now as it’s ever been, as we mourn the most recent of at least seven mass shootings this year.

In February, 59-year-old Jeong Soo Paek killed five people, including himself, at a Korean spa near Atlanta.

This May, four people were murdered at a cafe and another during a carjacking in Seattle. The shooter then killed himself.

In an Aurora, Colo., movie theater in July, 24-year-old James Holmes gunned down a midnight premiere of The Dark Knight Rises, killing 12 and injuring 58 more.

A 40-year-old killed six and wounded four in a Wisconsin Sikh temple in August and then died during a shootout with police.

After being fired from his job at a Minneapolis sign-making company in September, 36-year-old Andrew Engeldinger shot and killed seven, including himself and two who died later due to their injuries, at the business.

In other incidents, three people were killed in an Ohio high school shooting in February and a racially motivated shooting spree left three dead in Oklahoma in April. Three days before the Newtown massacre, three people, including the shooter, died in a Portland mall shooting. In August, a man shot a former co-worker near the Empire State Building and was then killed by police. (Nine bystanders were wounded by police fire in the process.)

Meanwhile, public opinion has become more favorable of gun rights. According to the Pew Research Center, neither the Virginia Tech rampage in 2007, the Arizona shooting that injured Rep. Gabrielle Giffords, nor the theater shooting in Aurora resulted in a significant shift in the balance of those who say gun control is more important than protecting gun owners’ rights and those who say the opposite. Just after each incident, the split was roughly the same as it had been before. And over time, support for gun control has waned. In 2007, around the time of the Virginia Tech shooting, 60 percent of people said it was more important to control gun ownership than protect it. This summer, it was a 47-46 split, barely in favor of control.

REACTIONS: Words for the unspeakable

In the aftermath of the shootings, leaders offered sympathy and mulled the place of guns, God and preparedness in a similar situation:

“And by that measure, can we truly say, as a nation, that we are meeting our obligations? Can we honestly say that we’re doing enough to keep our children — all of them — safe from harm?” — President Barack Obama in Newtown, two days after the shooting.

“We ask why there’s violence in our schools, but we’ve systematically removed God from our schools. Should we be so surprised that schools would become a place of carnage? Because we’ve made it a place where we don’t want to talk about eternity. Life. What responsibility means. Accountability.” — Former Arkansas Gov. Mike Huckabee, on Fox News.

“Today is a day for mourning, but in the days to come I will be listening to all in our community with ideas for how we can prevent such violence.” — Washington Governor-elect Jay Inslee, in a statement.

“We need to find out what happened and what drove this individual to this place. … I think we have to be careful about new, suggesting new gun laws. We need to look at what drives a crazy person to do these kind of actions and make sure that we’re enforcing the laws that are currently on the books. And yes, definitely, we need to do everything possible to make sure that something like this never happens again.” — Rep. Cathy McMorris Rodgers, in an interview for C-SPAN

“In these types of situations, you basically have three options: run, hide, or fight.” — Spokane County Sheriff Ozzie Knezovich, to KHQ.

“I’m praying for the families of CT shooting victims. I just want to hug my kids and never let them go.” — Spokane City Councilwoman Amber Waldref, on Twitter.

“The City of Spokane and Spokane Public Schools work closely together in many ways to help ensure that our kids are safe at school and within our community. And, we will continue to seek ways to improve their safety.” — Spokane Mayor David Condon, in a statement.

“Every [Spokane Police Department] officer is trained to respond to active shooter situations. We have trained in our local schools, developed joint plans and have detailed layouts of every school within in the City to speed our response.” — Spokane Police Chief Frank Straub, in a statement.