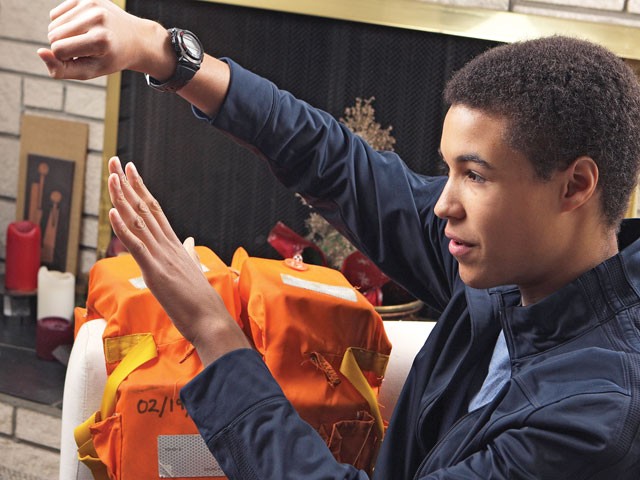 Young Kwak
Kwesi Phillips, 17, back home after surviving the wreck of SV Concordia

Midnight, and Kwesi Phillips takes the watch, scanning the dark horizon for help — searching for any sign of rescue and a ride back to dry earth.

Some 300 miles off the coast of Rio de Janeiro, the Mead High School grad is riding 9-foot swells in a life raft with 20 other people. Their ship, the three-masted SV Concordia, sank more than a day earlier in a freak accident.

The sea is tossing around the small raft when the 17-year-old sees what look like the lights of a ship.

“The waves were so high that the stars looked like lights,” Phillips recalls. “You’d see a light, but then the wave would go down.”

Wednesday, Feb. 17, 2:30 pm: Phillips has just gotten out of his marine biology class aboard the 190-foot Concordia.

As part of his “gap year” between high school and MIT, he signed up for Canadian-based Class Afloat and boarded the classroom-on-a-ship just nine days prior in Recife, Brazil, about 1,400 miles north of Rio.

Phillips has already gotten used to the ship’s patterns. Go to class, scrub the scuppers, do some rust busting, hang out with his new friends. One night, he watched dolphins carve through the bioluminescence.

But today he’s in his cabin, watching Quentin Tarantino’s Inglourious Basterds, when the ship begins to list.

“I went out into the companion way, wondering what was going on,” Phillips says. “My friend was out there with her rain jacket on. She said, ‘Oh, it’s fine. Let’s just go on deck and check it out.’ The ship starts keeling even more and then the floor — it’s just vertical — and I slide to the opposite side of the wall.”

Walking along the stairwell’s wall, Phillips and a few others reach the ship’s mess hall. Water’s pouring in some shattered windows and the “abandon ship” order has been given. After crawling out the windows and re-grouping, the ship’s 64 inhabitants — 48 students and 16 crewmembers — are sitting on the port side of the fallen ship. The weather’s nasty, with sheets of rain battering them and waves lapping at the ship.

“We feel the ship starting to sink, and the masts have gone underwater, so we had to jump off,” Phillips says. “I jumped off and grabbed onto to the side of a life raft. My friend pulled me on. We all started helping people get on to the life rafts. Our next step was to start bailing water out of the life rafts because we wanted to make sure we could stay above water as much as possible. This is when everyone starts to get seasick, which is even more pronounced when you’re in a life raft.”

Phillips last remembers seeing the sinking ship’s propeller, but he doesn’t have time to ponder the vessel’s demise. He’s fighting the waves off in the heavy rain and wind, which continue into the night. He will sleep in 15-minute increments, and then bail more water, using the same bag he had just rinsed of his vomit.

Nigel McCarthy, CEO of Class Afloat, was in Mexico City when he heard his students were lost at sea.

“You don’t like to think the worst, but it crosses your mind,” he says. “Thursday night was a very long night for us.”

First order of business for McCarthy was notifying parents and waiting for word of his students’ safe arrival. But he was already disturbed by what has been described as the Brazilian navy’s lackluster response.

The navy sent its first search aircraft about 19 hours after the ship’s distress call went out — almost a full day after Phillips and the others took to the life rafts.

McCarthy, who has criticized the delayed response, says there is an investigation going on to establish what happened and how.

According to the ship’s captain, William Curry of Seattle, the ship was nailed by a rare weather event called a “microburst” — a sudden and very localized downdraft of air. The column of air crippled the vessel.

“It’s just bad luck to be in that little tiny patch of the ocean at that particular moment in time,” Curry told the Canadian Broadcast Corporation. “They don’t last long — it’s just maybe a 10- or 15-minute event and then it’s over. It is pretty devastating to a sailing vessel because it pins you down as opposed to letting you go.”

It took just 20 minutes for the ship to sink. The next morning, almost 20 hours after the disaster and as Brazilian forces began their search, Capt. Curry told the castaways, “Someone is going to show up by mid-afternoon. It’s going to happen.”

“No one has shown up,” he says of his mood after 24 hours in the raft. “We don’t know anything about what’s going on. We’re alone in the middle of the ocean.”

Unlike the first day, which Phillips says consisted of little talk and a lot of “denial [and] processing,” the second day was more convivial. With the sun shining, they sang — a few First Nation songs from Canada, some traditional New Zealand tunes.

“We talked about hockey, what home is like, memories,” he says. “Things like, ‘What are you going to do when you get back? I’m just going to get a burger and beer. That’s all I want.’”

The mood was lighter, but their bodies were beginning to show wear. Skin was chafing from the saltwater and the raft’s rubber walls. Some were more seasick than others, and keeping them hydrated was an issue.

Phillips says conversation broached the possibility of being in the raft for an extended amount of time. “We talked about that a little bit, so we understood. But most of the time we tried to keep each other’s hopes up. ‘Oh, they’re coming, dude. It’s OK. They’re on their way. It’s OK.’”

If it kept raining every night, they had enough water— the rafts had a system that collected rainwater. And about 24 hours after the wreck, the ragged crew broke out their only food.

“We had these little ration bars that were little squares of sugar and lard and butter,” Phillips says. “It tasted so good because we hadn’t eaten in so long. But it was really just solid fat.”

With another sunset fast approaching, someone spotted a plane headed their way. Flares were fired into the sky and the plane circled for about a half-hour. The Brazilian plane had located them. The rafts celebrated.

“We were really happy,” Phillips says. “We ate another bar — which don’t taste as good the second time.”

When Phillips took watch later that night, with the 9-foot waves throwing him off, he knew somebody was coming. He just didn’t know when.

At about 1:30 the next morning, the Hokuetsu Delight came roaring through the rough ocean. The 650-foot freighter pulled close to them, lowered its staircase and ladder but decided the water was too rough for safe retrieval. They would have to wait in the rafts until it cleared.

For the rest of that night, Phillips had only his head above water. In the raft, below water, his body was wrapped in a sopping blanket, and he cuddled with others for warmth. The freighter loomed before them.

By 6 am, the water had calmed and the Hokuetsu crew began throwing lines down. Up the ladder and staircase, and on the deck, Phillips grabbed a sailor and hugged him.

“Just because,” Phillips says. “I was so happy. It’s the type of joy where all you can do is just smile. We were all rash-ed up and scarred, but we were all so happy. It was a great feeling, just to see everyone and be on solid metal. They cooked us some bowls of noodles and we ate a lot of food. A lot of food.”

A day later, on dry land in Rio, Phillips threw his arms around Capt. Curry. The Associated Press captured an image of the moment. Earth likely never felt so gratifying.

But back home, sitting in his living room near Whitworth University, Phillips is looking forward to going back to Lunenburg, Nova Scotia, to finish his semester at Class Afloat before he heads off to MIT, where he’ll study graphic design, computer programming and East Asian studies. He’ll be on dry land in Lunenburg — but he’s not so happy about that.

“I really want to get back on the sea,” he says.