Samantha Wohlfeil photo
DJ duo Louis The Child danced the night away with Spokane on Sept. 15, 2021.

Lasers in every color of the rainbow? Check. Songs that make you wanna get up and shake your butt? Check. A vaccine card-holding/negative test-toting crowd? Check check.

The joy of the crowd was contagious Wednesday night, Sept. 15, as many people who'd been waiting the better part of two years to see Louis The Child finally got to enjoy the party vibe with the DJ duo at the Pavilion in Riverfront Park.

Having purchased tickets for what was originally going to be the new venue's inaugural concert in June 2020, plenty in the crowd were finally able to relax into a night of dancing, camaraderie and beautiful lighting (both of the Pavilion netting and the stage).

EVAN GIIA and Manila Killa both helped the night start out with increasingly danceable songs as the sunset put on a show for everyone in the area. 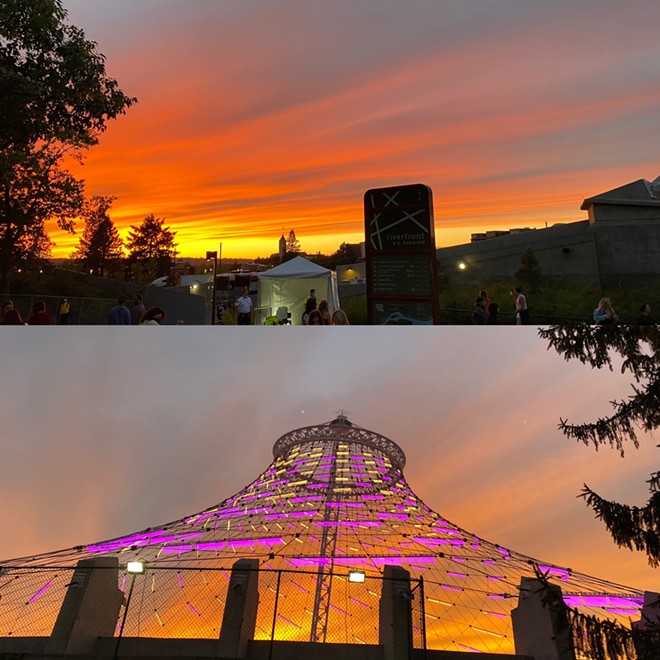 Samantha Wohlfeil photo
A spectacular natural light show helped warm up the audience as EVAN GIIA and Manila Killa performed ahead of Louis The Child.

By the time Louis The Child took the stage around 8:30 the crowd was amped up and ready to dance. Artists Robby Hauldren and Freddy Kennett happily joined in the fun, pumping their hands in the air and getting the crowd to join them in jumping to the beat.

For a fake-out last song they played one of their 2020 releases "Free," with the crowd belting the chorus "at least you're free" over and over.

Then, after a short walk off stage and some chants of "one more song" they returned to reward the fans who stuck around to the end with their best-known and loved song "Better Not." Suspiciously they had perfectly saved confetti cannons to go off during that welcomed "encore" (wink wink).
click to enlarge

Samantha Wohlfeil photo
Audience members pumped their hands and moved to the music during Louis The Child's Sept. 15 show.

Hauldren also briefly shared his thoughts with the crowd, noting that during the pandemic the guys spent a lot of time reconnecting with the music that drew them to the electronic dance-pop genre in the first place. Recalling the fun they had attending concerts about a decade ago, and the euphoria that sharing live music can give people, they knew that would be the focus of their tour (aptly named the Euphoria tour).

"If y'all felt that sense of euphoria for even a second, we accomplished what we set out to do," Hauldren told the crowd. "Take that happiness you felt tonight and spread it out in the world."