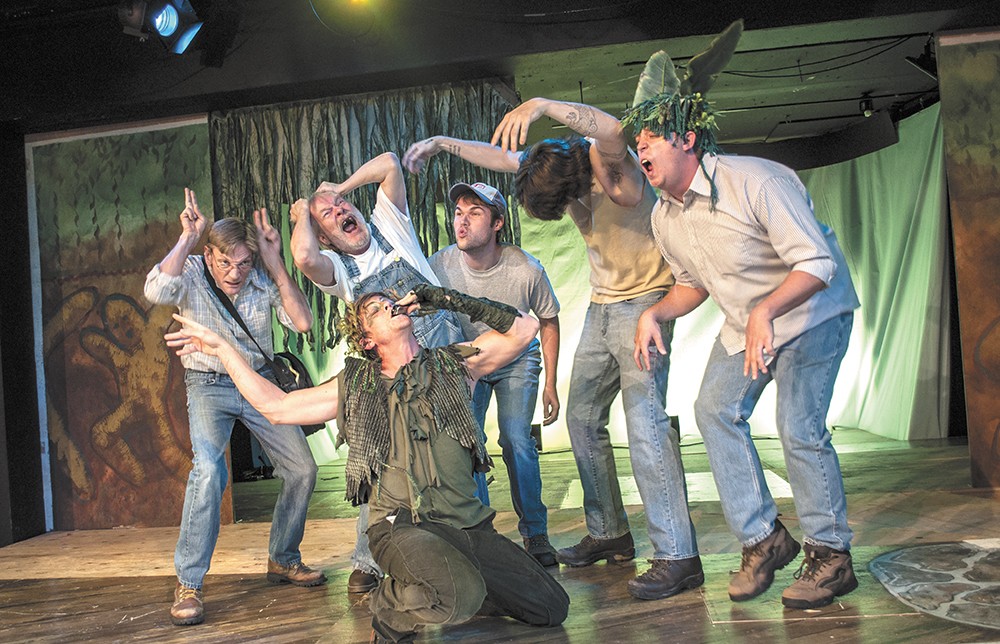 When Theseus, Duke of Athens,

waxes philosophical by lumping together "the lunatic, the lover and the poet," he hits on something closer to the heart of A Midsummer Night's Dream than the far more frequently quoted axiom by Lysander that "the course of true love never did run smooth."

He's suggesting that all three individuals fall prey to wild imaginings and fantasies, the very same ones that drive the intertwining plots of Shakespeare's whimsical play: the ragtag Mechanicals, poets in their own fevered minds; the quartet of lovers, who take turns abasing themselves for each other's affections; and the forest fairies, that troupe of unpredictable madmen and -women who think that transmogrifying the unsuspecting is a fun way to pass the time.

This co-production between Eastern Washington University and Interplayers, directed by EWU lecturer Jeff Sanders (Macbeth, It's a Wonderful Life: A Live Radio Play), serves Midsummer well by maintaining an uncommon balance among these three parts. Impish Puck (Nich Witham) gets more blacklight than limelight; he remains firmly under the thumb of temperamental Oberon (Brian Demar Jones, who also plays Theseus). Jaclyn Archer's Helena is fierce and assertive, even when she's on all fours imploring Demetrius (Paden Vance) to "[u]se me but as your spaniel — spurn me, strike me, / Neglect me, lose me." If ever that balance becomes skewed, it's when Sanders threatens to steal his own show as Nick Bottom, the overconfident, malapropism-prone weaver turned donkey.

Shana Joslyn's set is unassuming at first: two raised circular platforms painted a blotchy green. But the rear one conceals trap doors that the characters use, like Laugh-In's joke wall, to deliver lines or appear and vanish in ways that add to the mischief and the humor. For the first time in recent memory, the set also cleverly makes use of the area normally reserved for backstage. It's where, for instance, spellbound Titania (Sara Goff, who also plays Hippolyta) cuddles in a hammock with her asinine lover, backdropped by an ethereal purple light.

So many other things are elegantly thought out. Incidental gestures and accents like an untucked shirttail subtly complement the dialogue. The blocking manages to be both natural and exactingly precise, which is even more impressive considering the size of the cast. And what a cast it is. To call out the actors best suited to their parts would read like a dramatis personae; there is such an incredible mix of young and veteran talent on display here.

That makes this Midsummer everything it can and should be: absurd, hilarious, bawdy, captivating, illuminating and even a little contemplative, since Sanders has bookended the play with a hospital scene. Taking this kind of metaphysical, dream-within-a-dream approach is an interesting touch, but connecting the two in a relevant way takes a bit of a stretch. Whatever unsatisfying ambiguity that might introduce is inconsequential, though. There is so, so much to enjoy about this production and take home at the end of a delightful midsummer evening. ♦