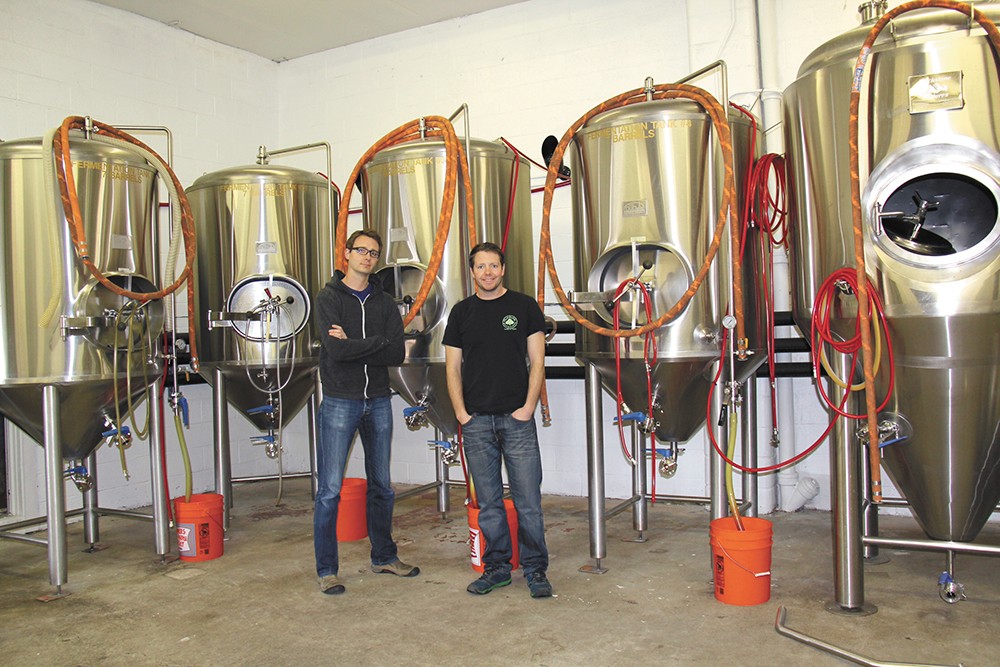 You might say the luck o' the Irish has been with brothers Mickey and Duffy Mahoney since opening their Sandpoint-based brewpub on St. Patrick's Day 2006. But it's also been hard work.

In addition to operating their popular First Avenue tasting room and gastropub, MickDuff's is in the midst of a multiphase expansion that will fill tables in the pub and beer glasses throughout Inland Northwest restaurants.

This past April, they relocated and expanded their seven-barrel operation just a hop, skip and a jump away to 220 Cedar Street. That's where Pend Oreille Winery is located, at least until their new digs are ready in a remodeled historic building just across the way.

MickDuff's occupies the back end of the building, using 4,000 square feet of industrial space for more and larger tanks, refrigeration and the keg washer Mickey designed and built. Kegs stand ready to be filled with Lake Paddler Pale Ale, an American pale ale dry-hopped with Cascade hops, or NOHO — a play on NOrth IdaHO — a dry-hopped American India pale ale they're now shipping via Odom Distributing to places like Fedora, Capone's, Fort Ground Grill and Paddy's in Coeur d'Alene. They're also in Bonners Ferry, Moscow and Lewiston, and plan to roll into Eastern Washington this fall.

MickDuff's expects to produce 1,000 barrels in their new facility by year's end, and add beers to their distribution list. They'll also set up a retail space — making it even easier for local keg orders — once the winery relocates, and maintain the pub on First Avenue.

The original pub is set to house a new two-barrel pilot operation allowing MickDuff's to develop more seasonal beers, all of which use natural ingredients, served unfiltered and preservative-free. Many of these beers are award-winning — Tipsy Toehead Blonde and Irish Redhead snagged gold at the North American Beer Awards in 2012 and 2013, respectively — and they've gained a loyal following for similarly good food, with plenty of gluten-free and vegetarian menu options.♦