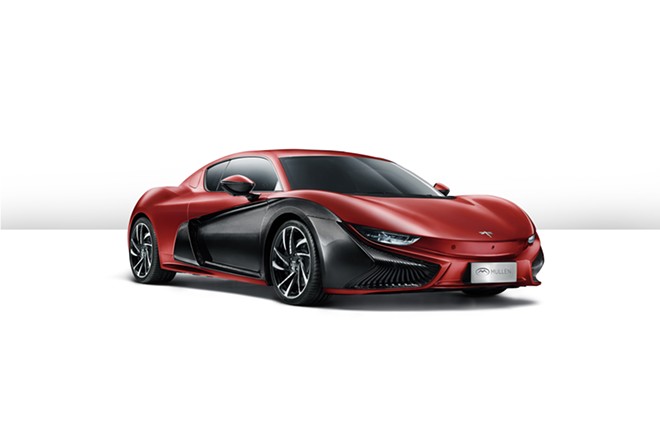 The maker of a luxury electric sports car called the Qiantu K50 has signed a letter of intent to move in near Spokane International Airport to build its cars.

Mullen Technologies and the West Plains Airport Area Public Development Authority (PDA) announced their proposed partnership Wednesday, April 24. The PDA is working with the company on plans to build a new green manufacturing campus and rail infrastructure, which the company would lease and use to build its cars and batteries.

“We are looking forward to working with the West Plains Airport Area Public Development Authority, to bring strong wage-earning jobs to the Spokane region" Mullen Chairman and CEO David Michery says in the announcement. "[The] PDA and Mullen are working very closely as we introduce the Qiantu K50 all electric sports car to the U.S. market, along with emerging battery cell technology."

After a lease agreement is finalized, the PDA plans to lease the land from the airport and finish building out an $8 million rail line already in the works (a $6 million request is in to the Legislature, and the PDA and Airport have each agreed to pony up $1 million), says Todd Coleman, the PDA's executive director.

"The PDA would then go obtain a revenue bond, would build the facilities, then would lease those facilities back to Mullen," Coleman says. "We’d use those proceeds to pay back the bond."

The first phase envisions the PDA building a 500,000-square-foot facility where Mullen could build the automobiles and house research and development for its lithium batteries, Coleman says.

"Then if they expand into production of batteries, they need an additional 800,000-square-feet in phase two," he says.

The PDA is still working through details with Mullen on the first building, so the cost isn't yet known, but it could be in the range of $40 million to $50 million, Coleman says. The electric car company would have to put up a surety bond to protect the PDA's interests for taking on the large project, he says.

While the first building wouldn't likely be ready for the company to start manufacturing processes in until April 2021, the company plans to move 55 employees into one of a couple existing facilities on the West Plains by the end of the year, Coleman says.

If things go as planned, the company could bring 863 jobs to the area by 2026, and if it goes into battery manufacturing, that number could swell to as much as 3,000, the PDA announced Wednesday.

"This is exactly the role that our community leaders envisioned for the PDA and the [letter of intent] with Mullen is another example of our efforts to deliver on that vision," says Larry Krauter, chair of the PDA and Spokane International Airport CEO, in the announcement.

In the announcement, Spokane City Council President and PDA Treasurer Ben Stuckart also says, “this shows that the strong partnership between the city, county and airport gets results. Spokane will only continue to get big wins for the region when we collaborate.”

Part of what drew Mullen to the region, Coleman says, was that one of the equity raisers for the company has a connection here.

"To his credit, he said, 'If you're serious about funding, we have people who are interested in those markets in Washington state,'" Coleman says. "'You ought to be looking at Spokane as a place to put down your business, from a quality of life standpoint, and from a business standpoint, with no income tax.'"