Frank Boyden captures the natural world expertly. And he doesn't mind looking insane in the process.

Event: Works by Frank Boyden At the Art Spirit Gallery through Aug. 6 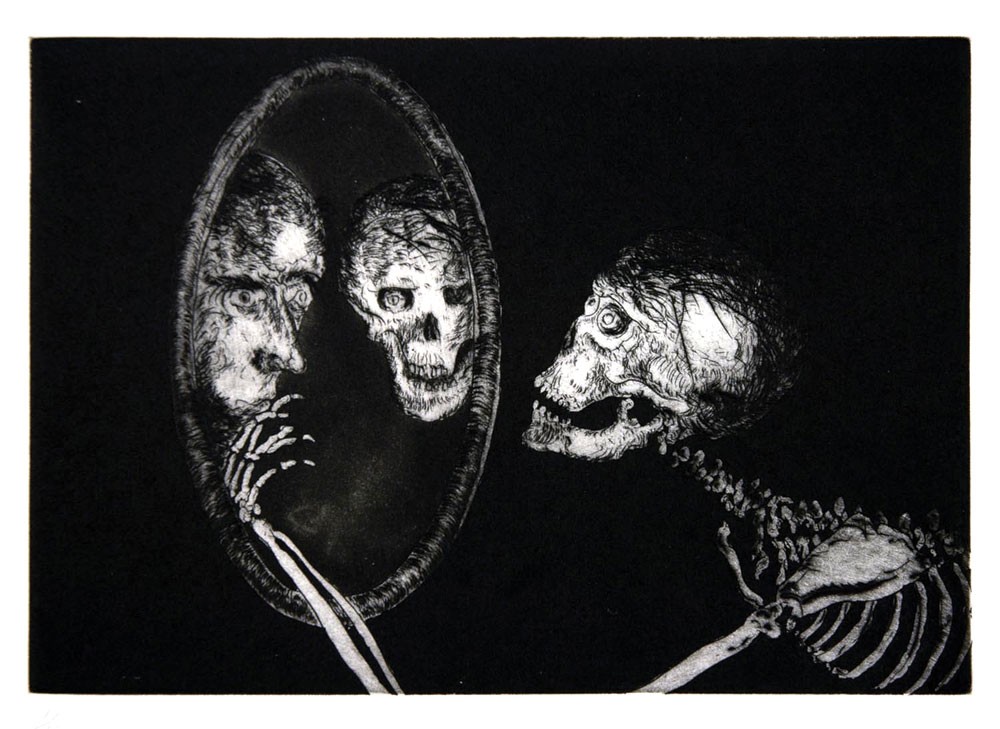 Frank Boyden - Uncle Skulky Beckons the Artist from his Mirror of Illusions
He knew he looked crazy. But, even so, every day for a week, Frank Boyden, a respected Oregon ceramicist and printmaker, unloaded his lawn chair in the Lincoln City Safeway parking lot and sat, feeding birds for hours.

“I would get all of the bread and sweet rolls and shit out of their bins. And I sat in the parking lot and began to feed crows,” he says over the phone last week. “I’d go down there and meet up. Me and the crows.”

And for hours at a time, Boyden would sketch the crows as they ate — catching the way their wings would point up as they landed, the way their beaks pecked the ground and competed for scraps.

“People thought I was nuts.” The 68-year-old artist has long communed with the natural world that surrounds his coastal Oregon home for inspiration. But asking nature to come to him — with day-old scraps of bread — was a new approach. Looking crazy for a week spawned a suite of nine prints called “Stances,” as well as nine orchestral works (composed by a friend of Boyden’s) and a book.

Being productive isn’t much of a problem for Boyden, an artist who has been shown in several countries and across the United States from state capital buildings to art museums. Some of his print collections contain nearly 100 prints. And yet they are all, he says, grounded in the simplest of ideas.

That’s not to say they are simpleminded or lacking drama and tension.

Hardly. In fact, many of Boyden’s works are fraught with shaking, palpable outrage and frustration.

Like in “A Conversation with Alders,” another set of prints. Towering, gangly alders stand quiet in the afternoon sun, slowly growing angry and gnarled from windstorms and time.

“I started out making these things because I’d had a tremendous argument with an assistant of mine. This young lady who was in grad school at Pratt had told me that it was irrelevant to draw trees anymore because they had already been done,” Boyden says. “We got in a hell of a fight about that. I was all fuming and scratching around about it. I made this suite of prints about alders. I thought, ‘I’ll just do that. I’ll just show you.’” That frustration is in the shadows of all of his prints. In the way his smoky owls peek through morning fog. Or how the moon, under Boyden’s eye, slowly fades in a night sky during a lunar eclipse. And when the shadow moves, a grinning skull laughs from the place the moon once was.

But where his prints, often dark and foggy, might encompass ranges of human emotion, Boyden’s ceramic works capture the stark beauty and darkness of the natural world. The shift from flat to three-dimensional adds a motion and depth to his work.

Because of their size and price, Boyden realizes they’re not a hot item for people to purchase. And, almost because of this, it seems that the artist — who draws skeletons and hatching spiders directly into the clay — feels freer to let his emotions take hold on his ceramic pieces.

As on his “Democracy Vase,” one in a series of pots. Skeletons tug and trip each other in a constant battle across its surface. “These were done in 2008 just a couple weeks before the presidential election. I was so tired of the carping and whining and dribbling of these politicians. I was so disgusted with it,” he says. “These people were such jerks.”

And so his pots mimicked that — replacing politicians with gangly skeletons. “They are just trashing each other — defecating on

each other and doing such nasty things to each other.

“[People] don’t buy them … people don’t want to see the things happening on those pots [on display] in front of their children,” he says, laughing.