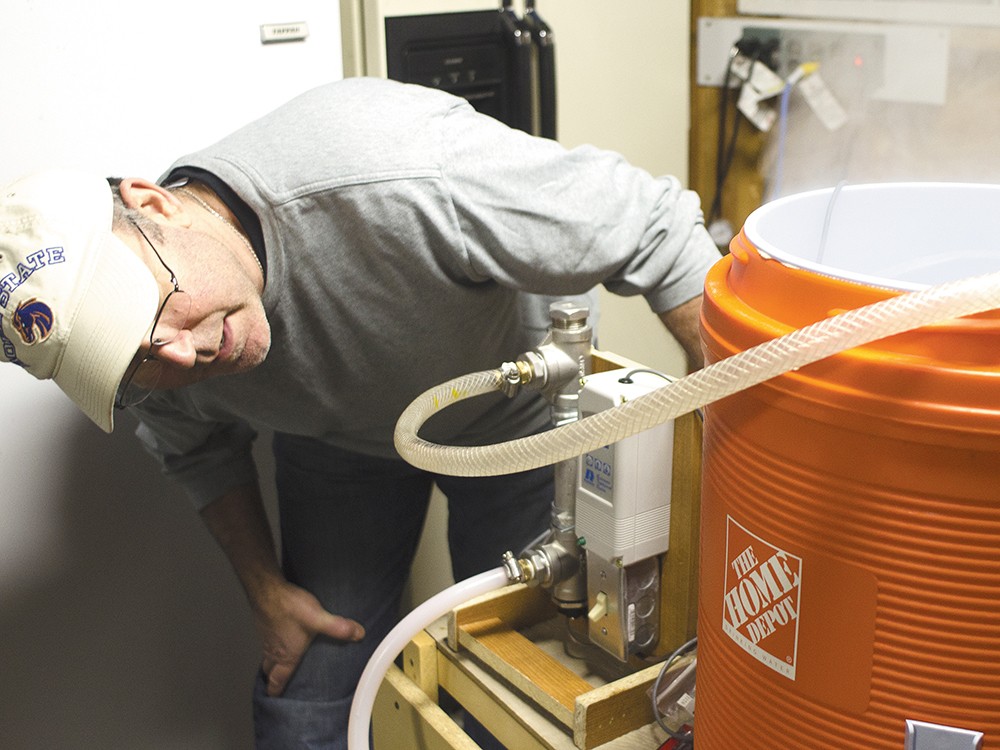 More than 25 years ago, Spokane resident Brian Kennedy cooked up his first pot of homemade beer in his kitchen and dumped the mixture into a garbage can to ferment. To keep out potential bacteria, he draped a towel over the top of the can.

“That’s how it was in the early days,” he says, shaking his head.

Unsurprisingly, the batch ended up undrinkable, but Kennedy kept at it. He now has glass fermenting bottles and uses an electric water pump to circulate his brews. As he stirs his latest batch, the wet smell of cooked grain hangs thick in the air.

No longer limited to what he can find at the store, his pint glass has become a playground. He can brew up hoppy hybrids or customize old favorites. He can experiment with new ingredients or styles, testing his libations on family and friends.

“I get a great deal of satisfaction from brewing,” he says.

Combining the do-it-yourself movement with the craft brewery boom, homebrewing has grown increasingly popular in recent years. Hop heads looking to cook their own bubbly beverages can tap local homebrew stores, how-to books, beer-making classes and a variety of online resources for help getting started.

Robert Ketcham, owner of Jim’s Homebrew Supply in Spokane, says his North Division store offers three differently sized starter kits along with other supplies to set up your own in-house brewery. First-time brewers can also find recipe manuals and an experienced staff to help them decide what they need.

“There’s a lot of different ways to go about it,” says Ketcham.

Making your own beer offers many rewards, often surprising and delicious. Some people enjoy the artistic or culinary challenge, he says. Some want to push the boundaries on their favorite beverages. Others just find that first cold sip of crisp ale a little better when they know they made it themselves.

A homebrewer for 25 years, Ketcham advises new brewers to be patient. Brewing takes a certain level of discipline because each batch often takes hours to cook and weeks to ferment.

Don’t get discouraged over a single bad batch, he says. Remember to keep things clean. Start with simple beer styles and follow the instructions closely.

For those seeking an almost-too-simple way to try out homebrewing, several companies offer rudimentary kits for beginners. Mr. Beer and other companies sell basic starter kits with stripped-down instructions and pre-measured ingredients.

A Mr. Beer-style kit removes much of the guesswork, as well as creativity and risk, from your brewing, but can still help beginners understand how each step in the process works. The resulting beer may end up a little flat or yeasty, but it will also demonstrate how small differences in preparation, fermentation and bottling can affect taste.

Contrary to what many people expect, Ketcham emphasizes that homemade beer, with practice and care, can taste as good or better than any commercially produced beer. Most popular beers now filling taverns and taphouses started as somebody’s hobby.

For many homebrewers, the true joy of making beer comes from creating and perfecting unique recipes. Serious brewers will meticulously track ingredients, measurements, timing and temperatures.

Each batch becomes an opportunity to do better.

For his latest batch, Kennedy mixes fresh hops into the boiling brew. When it’s done, he chills the mixture and drains it into a glass carboy to ferment. He adds yeast and seals the bottle. It will take at least three weeks before it is ready to drink.

Kennedy pulls open the fridge where his previous batch sits cold in its keg. He pours himself a pint. Might as well have a beer while he waits.

Cristina Henriquez: The Book of Unknown Americans @ University of Idaho