How one Idaho farm is helping revive the beloved chestnut. 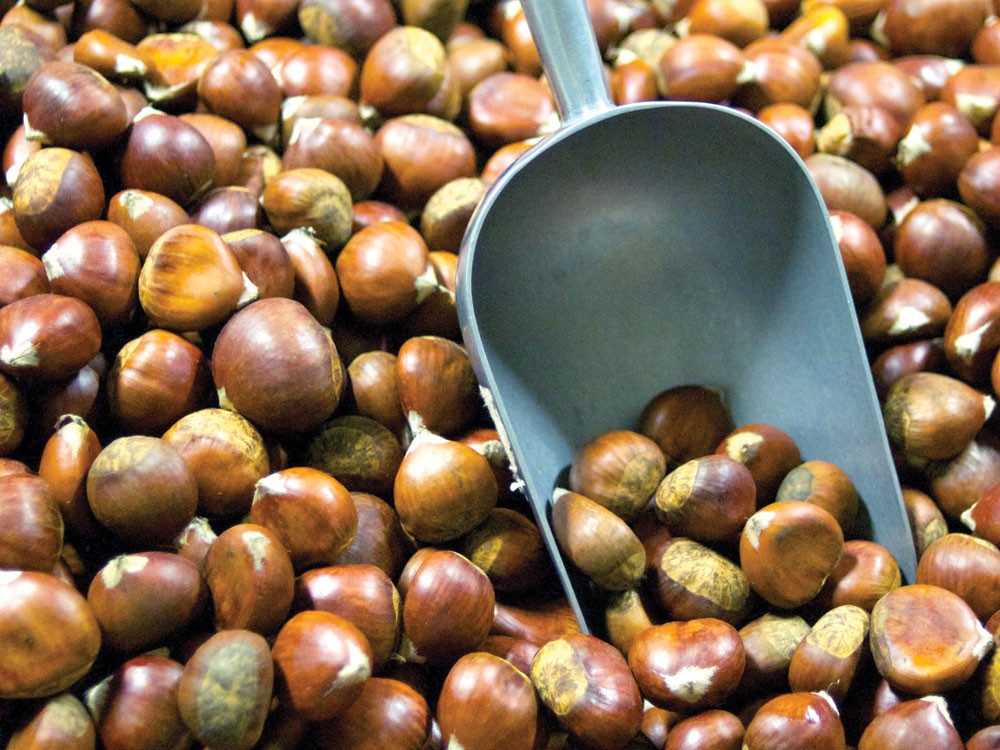 Guy Hand
Once forgotten, the chestnut is now back in the scoop.

"I think we got a rainstorm coming in,” says Peggy Paul, pointing to the ominous band of clouds rolling our way on a blustery, mid-November day in southern Idaho. She leads me into the shelter of her nearby orchard as icy rain begins to tick against the dry leaves and bristled burrs that cling to some 500 chestnut trees.

The trees protect us from the rain, and they remind me of an enchanted forest far more than a commercial orchard.

Enchanted or not, a chestnut forest is a rare sight.

That’s because, as a recent New York Times article put it, the American chestnut (Castanea dentata) “had a worse 20th century than the British Empire, the ice-delivery trade or rhyming poetry.”

Once a stately member of the Eastern hardwood forest ecosystem, up to 4 billion American chestnut trees fell victim to a blight during the 1930s and 1940s, virtually scouring the species from its native habitat. That’s why the majority of Americans today experience the chestnut via imported and frequently inferior Chinese chestnuts, or vicariously through that 1946 nostalgia-laden chestnut of a ballad, “The Christmas Song,” in which Nat King Cole crooned about roasting them over an open fire.

“These are Colossal chestnuts,” Paul says of the stately trees that surround us. “This is a strain of chestnut that has been crossed with a domestic nut and a Chinese chestnut. They’re blight-free chestnuts.”

In Idaho, the Pauls sell these fresh chestnuts under the name “Idaho Chestnut Growers” in Super One stores in North Idaho, along with several other markets and restaurants throughout the state.

“I, along with a lot of growers within the Northwest and the Midwest, am trying to bring chestnut trees back to the United States,” says Paul.

Paul knows of one other commercial chestnut grower near Horseshoe Bend, about 20 growers in Oregon, 15 in Washington and another 50 in Missouri and Illinois.

As Paul and I wander through her orchard, we crunch our way through a lumpy carpet of what look like brown, porcupine-quilled Christmas ornaments. She carefully picks one up — a chestnut burr — and, through a slit in its side, shows me three shiny chestnuts nestled tightly within. Thankfully, she adds, most burrs don’t cling so tenaciously to their contents.

“When the nut ripens, the burrs open and the nuts fall to the ground,” Paul says. “Just kind of Mother Nature’s way of helping harvest.”

Though the Pauls had wrapped up their 2011 harvest a few days before, Peggy Paul remembers just how the season began.

“This year’s first five pounds were picked by my 3- and 5-year-old grandsons,” she says. “They came out here, and it’s like an Easter egg hunt: ‘Come on, Grandma, let’s look for a nut.’” A trickle of nuts starts falling from the sky at the beginning of autumn, which soon turns into a deluge as more and more burrs burst open, sending thousands of pounds of chestnuts raining down as the harvest progresses. For that, Paul hires a crew.

According to a 2009 study conducted by the University of Missouri, commercial chestnut production in America is “still in its infancy” as growers like the Pauls plant and tend young, blight-resistant orchards that haven’t yet reached full maturity. The Capital Press, an agricultural weekly, reported last year that “many chestnut growers in the U.S. have no problem selling their entire crops year after year, either fresh or processed.”

When the Pauls planted their orchard in 1993, they thought of it more as a hobby than a way to capitalize on a resurgent interest in a nearly extinct crop. Several years passed before they even began to collect chestnuts.

“In 1998, I had enough to do my first big Albertsons order,” Paul says with a smile. “At that time, it was 50 boxes. I was so excited I could hardly contain myself.”


A few days later, Nick Duncan, head chef at La Belle Vie in Nampa, Idaho, showed me a risotto he was making as a dinner special using chestnuts he’d picked up from the Pauls earlier that morning.

Rather than carefully scoring the hard outer membrane of the chestnut first, a laborious task that turns off many a chestnut novice, Duncan simply chops the nut in half with a sharp chef’s knife before parboiling it. He then scoops out the chestnut meat while still hot, explaining that the meat clings to the thin inner skin if left to cool. Once cooked, he says, it can be used to make soups, stuffings, desserts or any number of other preparations.

For his chestnut risotto, Duncan sautees parboiled chestnuts in brown butter, then adds a little brandy and marsala, lets it simmer until the chestnuts are soft and, finally, purees the mixture. He then uses that sweet, earthy base to enrich his risotto.

In early December, Boise Co-op cooking instructor Sylvie Ryan set up a chestnut demonstration for marrons glaces, which are candied chestnuts. Ryan grew up eating chestnuts in France (the chestnut blight didn’t strike Europe), and the labor-intensive marrons glaces remind her of home.

“They take about a week to prepare, and you just slowly add sugar to the syrup [made of water, sugar and fresh vanilla bean] every day,” said Ryan. “You let the chestnuts soak the sugar in, and then you glaze them in the oven.”

That final glazing gives marrons glaces their name and creates a sweet crunch to a chestnut confection that may have been created not long after the Crusades brought sugar to France.

Back at the Paul warehouse, Peggy tells me how to make classic roasted chestnuts. You can buy a special chestnut roaster, she says, that has a wire mesh clam-shell at one end and a long handle that allows you to hold the roaster over an open fire, a la Nat King Cole. Paul, however, prefers throwing the nuts into a perforated aluminum pan on a barbecue grill heated to about 350 degrees, closing the lid and letting the nuts roast for about 25 minutes.

Paul offers me some still-warm roasted chestnuts she’d grilled earlier. After prying one out of its shell and popping it into my mouth, I could understand what a tragedy it must have been for earlier American chestnut lovers to lose their beloved trees to blight and never again be able to savor the sweet, earthy flavor of a freshly roasted chestnut. However, thanks to a new crop of American growers, like the Pauls, that taste no longer has to be just a memory.