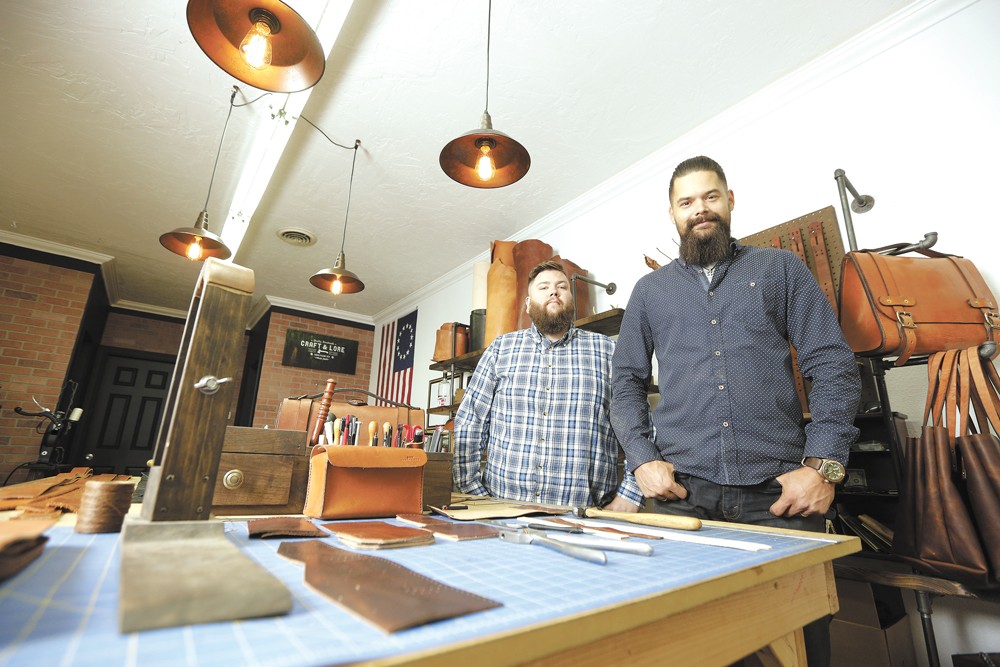 W e want to do things on our own again.

Brew beer, grow vegetables, keep chickens and even build motorcycles. Out of this obsession comes a new era of men creating fashion. Not ready-to-wear women's or men's lines, in the vein of fellow Americans Michael Kors or Ralph Lauren, but rather fashion-forward gear that can be put to use in the great outdoors, like knit hats to keep warm, belts that never break and boots that can take a hard day's work. Below are three Inland Northwest men who've built local fashion businesses with their own two hands.

The workers in the oil fields of North Dakota back in 2013 used to complain that their utility belts would wear out within months of purchase. Chad Von Lind, who had gotten into leather-making in a prior stint in Seattle, thought he could help out his coworkers by crafting a belt so "overbuilt" that it would take a couple of centuries to show signs of wear. Then came the wallets. Truckers in the area wanted something that could rest in their back pockets comfortably. Little by little, Craft and Lore took form.

Von Lind says that after two years selling online, it was time to make a push and create a physical store. While his designs are different (check out the double-wrap on some of his wallets), he says that quite a few are doing what he's doing, especially in the Northwest.

Bootmaking requires many machines, ones that Thrux Lawrence founder Tanden Launder doesn't own. That's why last year he chose to partner with the century-old, Spokane-based White's Boots to make a shoe durable enough to be a part of his outdoor luxury brand.

"These are crossover boots," he explains of the leather shoes, which run at $490 and come in basic neutral shades. "You can go from riding your motorcycle during the day to dusting them off and wearing them on a date with your girl."

Those first 40 or so pairs of shoes off the line were a gamble. He worried that they wouldn't sell.

"People know White's; they're trusted," says Launder, who's worn boots the majority of his life. "The hope was that people would see the company had collaborated with us and equate our bags (which Thrux Lawrence is best known for) with that same high level of quality. At the same time, we're helping to keep White's current, making the shoe a bit more modern."

Founded in 2012, the Coeur d'Alene Thrux Lawrence site opened in 2014, selling a mix of quality leather goods. From the floor you can watch bags being stitched with care in the back workshop, and dudes in the next-door barber shop getting some semblance of the Macklemore haircut. The boots, which have sold well especially in Japan, sit up front.

"Guys come in and see our Red Wing boot selection, which is cheaper, but more often go with the Thrux Lawrence boot, because it's locally made and they know it will last," Launder says. "That's quite gratifying." 206 N. 3rd St, Coeur d'Alene, thruxlawrence.com

The open road called to him. Two years ago, Ethan Rollins and his girlfriend packed up everything they owned into his grandpa's old trailer and left California. That also meant taking his Local Knits business on the move. He knitted on the highway and filled orders for his online shop. Last September, the couple ended up in Spokane, where a promise of some stability and family was too appealing. Already, Rollins' handmade knits and hats with their leather logos are bringing in more orders than he can handle.

In his studio, a converted basement in the Vinegar Flats neighborhood, he shows off his jerry-rigged leather branding tool, with a looping "local" stamp on the end, and two sewing machines, which he works with almost daily.

"I get inspiration from experience," says Rollins, who grew up snowboarding and skateboarding in Northern California. "I don't like to depend on other people to make and do things for me."

This is a lifestyle brand, which, as pointed out on Rollins' website, is "awesome for skating, snowboarding, camping, exploring or whatever other weird stuff you're into!"

Since taking the brand full time after arriving in the Inland Northwest, Rollins can be found at various craft fairs throughout the region, touting his graphic tees, hooded sweatshirts and even wallets.

"Everyone should know how to sew. It's not a girl thing only," he says. "It's a lost art." localknits.com