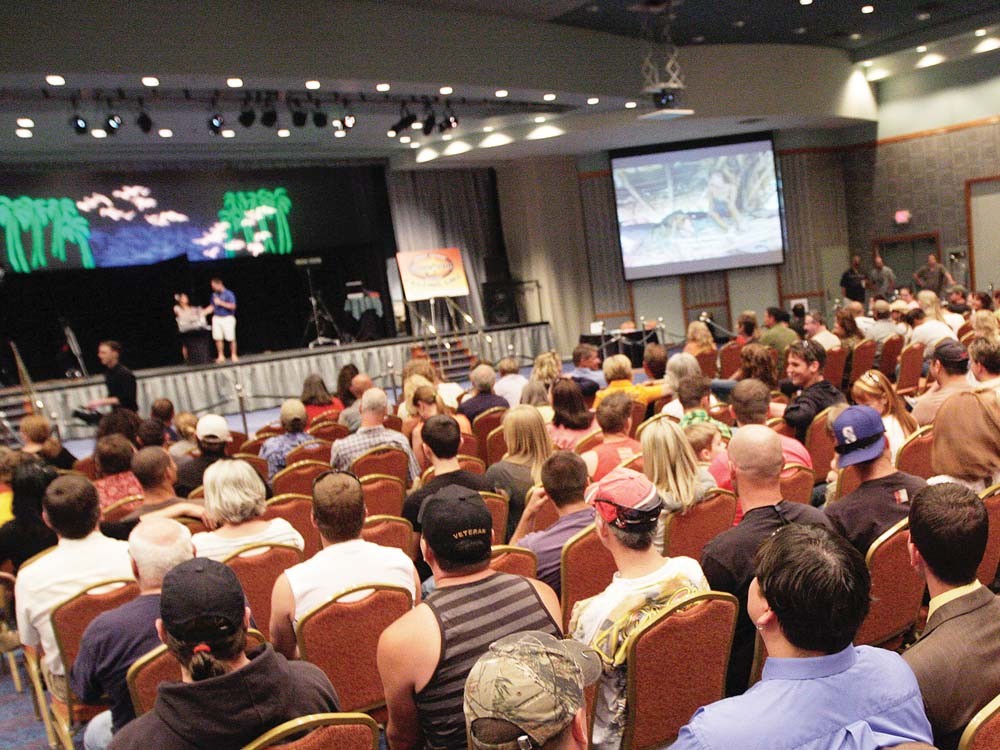 Robin Warren is a survivor. The 54-year-old baker from Twin Falls, Idaho, narrowly beat throat cancer four years ago. But on Friday at Northern Quest Resort and Casino, she was aiming to become a Survivor survivor.

Warren is one of more than 200 people who turned out at the casino for a casting call for the CBS reality show Survivor, in which contestants stranded in the wilderness compete against each other for cash and glory.

Warren had flown up the night before from Twin Falls and then waited in line six hours until Northern Quest staff started distributing raffle tickets. She would remain in the casino all day. At 5:30 pm, she and her fellow potential castaways — some new friends she’d met that day — would learn if their tickets had earned them one of 100 one-minute audition spots for Survivor producers.

“When I was in bed with cancer I said to myself if I ever got healthy again, if I could beat it, I would absolutely give it a shot to be on Survivor,” Warren says before the raffle process begins.

She has given it one heck of a shot. She’s made audition tapes and sent them to CBS. And now, with a shot at priority access to the show’s producers, she’s pulling out all the stops.

Clutched to her chest is a large manila envelope containing pre-signed liability release forms, a back-up audition tape and a small, clear film canister. Inside is a single cricket, the only one of six to have survived the trip from Twin Falls.

“I’m sure no one else has a cricket in their envelope,” she says sincerely. “I’m going to eat it.”

But in order to eat it on-camera for her audition, she has to have one of the 100 golden tickets.

Before the raffle begins, the mood among the crowd is tense, as people wait for their chance at 15 minutes of fame. Or, in Warren’s case, their chance at fulfilling a self-motivating promise and bringing home a pot of money desperately needed to pay off mounds of medical bills.

“I am in serious debt behind the cancer,” Warren says frankly. “I would like to be out of debt and help my family have a better life.”

In the audience are people of every body shape, size and hairstyle. The faux-hawk appears particularly popular among the 20- to 30-year-old male crowd. There are teachers and construction workers, people who look like couch potatoes and triathletes. Flip-flops are the dominant footwear. One 20-something guy sports a tattoo of a tropical sunset location.

KREM sports director Tim Lewis, the evening’s masters of ceremonies, asks if anyone is nervous.

“Hell yeah, I’m nervous!” shouts a man in back, jolting life into a somewhat restrained crowd. The raffle begins and, one-by-one, excited contestants leap from their seats. Lewis calls another number.

Lewis slowly calls the numbers of 99 other lucky contestants. One, Pam Raab, hadn’t even planned on being here today. She came only because a friend called her a few hours earlier and told her about the casting call.

“It was like fate, right?” Raab says. And suddenly there they are. One hundred people, the field cut by more than half.

In the back of the room stands Robin Warren, her ticket in hand, manila envelope clutched even tighter to her chest. Her number wasn’t called.

“I’m not going anywhere,” she says, determined to stay and watch the audition of a friend she’d made that day. But the raw emotion in her voice is painfully obvious.

And with that, she walks to the group of people waiting to audition, digs deep to the bottom of the envelope, pulls out a film canister and hands it to her new friend.