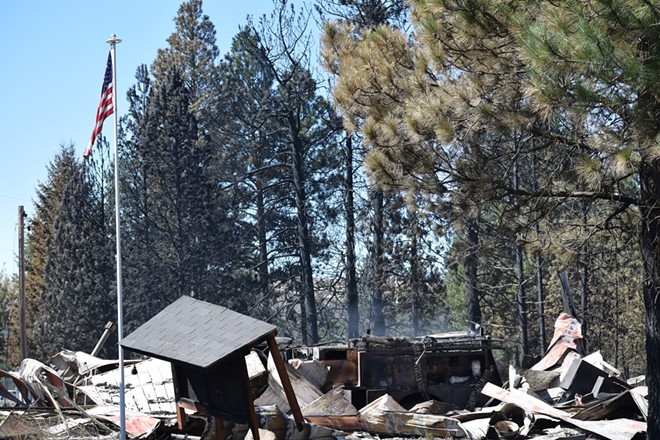 Wilson Criscione photo
A wildfire in September burned down most structures in the town of Malden, including City Hall

It's been three months since a fire ripped through the town of Malden and nearby Pine City, destroying almost everything in its path. But President Donald Trump has still not responded to requests to declare the fire a major disaster, which would open up aid from the Federal Emergency Management Agency to help residents rebuild the town.

Confounded by the delay, local residents wrote Trump a letter yesterday asking for "timely consideration" of the disaster declaration request.

"Please do the right thing," the letter says.

Washington Gov. Jay Inslee asked Trump in September to declare the fire a major disaster, and so did Washington's entire congressional delegation. Fires in Oregon and California around the same time were declared major disasters. But there has been no word on the Babb fire, which destroyed 85 percent of homes in Malden and Pine City, home to just a few hundred people.

Scott Hokonson, who lost his Malden home in the fire, says the community just needs a "yes" or "no" answer. Hokonson is now leading the Pine Creek Community Restoration Long Term Recovery Organization, and he says if the request is denied then people without insurance will have a tougher time getting the assistance they need. They could try to seek relief through the Small Business Administration, but the SBA would only provide disaster assistance once they know the FEMA request was denied, he says.

"We're just way behind the 8-ball on this," Hokonson says. "It's normally a step that happens quickly without any hiccups," he adds.

The letter to Trump was signed by Hokonson and Dan Harwood, the mayor of Malden.


Nobody died in the fire, which burned through the area on Sept. 7 and was likely caused by a tree that fell onto a power line, the Spokesman-Review reported. Of the homes destroyed, a majority were uninsured or underinsured. Many residents, including Hokonson, have found places to live since their home burned down. But others haven't and are simply staying in trailers with nowhere else to go.

Hokonson says a disaster declaration would mean "everything" to people with no insurance.

"It's hurting those who have the least," he says of the delay.

The letter to Trump mentions one man, a construction worker and veteran, who lost his home and all of his possessions before also losing his wife. He now lives in a motorhome on his property. The letter also mentions a family of six is cramming into an RV after losing their home.

"These are but two of the stories of our residents," the letter reads. "We have many others with similar struggles and needs that we're trying to address. All of this combined with the reality of the current pandemic has meant that our recovery and support efforts have been made much more difficult."

Hokonson says that "nothing" has been rebuilt yet — not counting a few temporary buildings serving as the town hall, library and command center.


"The entire community is gone," Hokonson says. "It looks like it's been bombed."