NEWS: The Spokane GOP invited known white nationalist James Allsup to speak at its movie night. Inlander staffer Daniel Walters reports that Allsup, a former Washington State University College Republicans president, was indeed invited to the Spokane GOP’s Northwest Grassroots event on July 11 where he complained about being labeled as a bigot by the media.

In her defense, Spokane GOP Chairwoman and event host Cecily Wright had harsh words for Allsup last year. But then she welcomed him with open arms in July. But then, when footage of him speaking at the event was released, Wright apologized, saying that it was a mistake in her judgment.

NATION: Also, if you thought 2016 was bad, Facebook recently announced it discovered a new political influence campaign. It’s not tied to Russia, as far as they can tell. So maybe it’s Moldova this time. 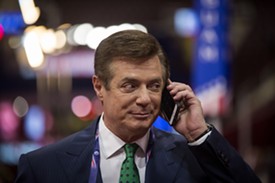 “Situational narcolepsy”
A group called the Patriotic Millionaires — yes that’s their real name — is planning to support candidates in the midterms who are running against incumbent politicians who voted for Republican tax cuts. Are you asleep already? Sorry. A spokeswoman for the group says that once anyone starts talking about tax code, people immediately start to drift off. One of the group’s major goals is to reduce the amount of money in politics. (Vox)

Downloadable gun blocked
A Seattle judge has blocked the release of blueprints for 3D-printed guns, for now. The schematics for the untraceable guns were planned to be released online for 3D printers. (Seattle Times)

103 survive plane crash
Shortly after takeoff, an Aeromexico plane crashed into the ground. Miraculously, everyone survived, though most are injured. (BBC)