Turkish-born Raci Erdem made his name on Mediterranean joints with American monikers. He’s about to become a two-state mogul. 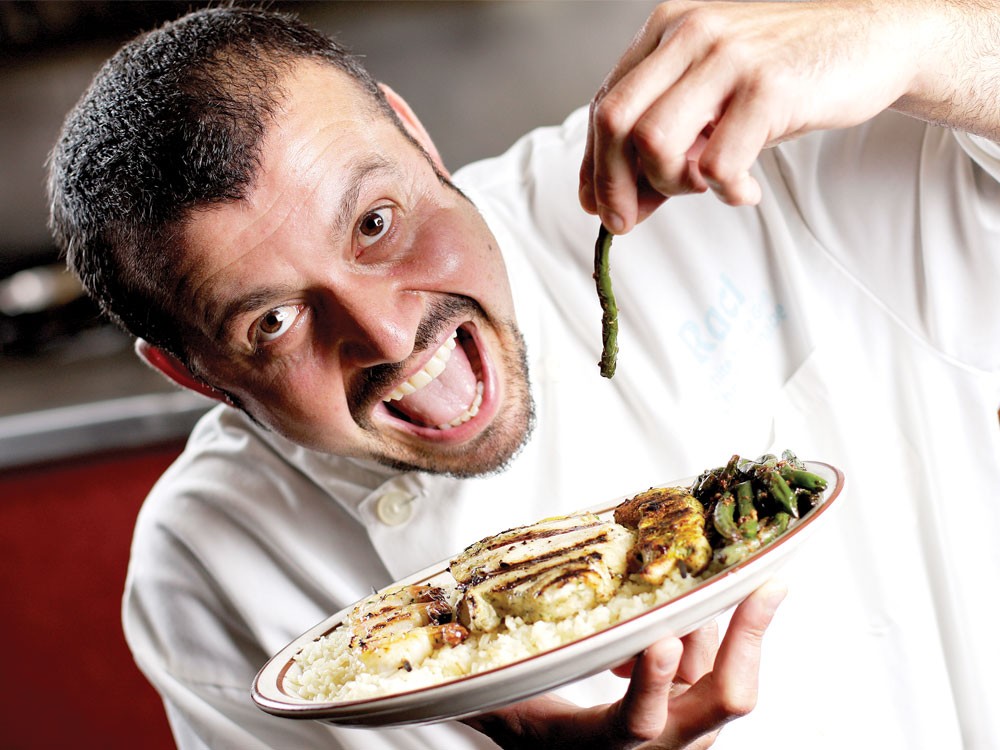 Salt and Yoga at Spuds

A Simple Drink with Wide Appeal

Don’t be fooled by Raci Erdem’s banter as the affable foreigner. Sure, he’s been known to sing off-key while patrolling the dining room of his wildly popular White House Grill (620 N. Spokane St., Post Falls). Yes, the tagline on the website for his Oval Office restaurant — referencing a certain Monica Lewinsky — is all nudge-nudge, wink-wink. And his we-love-garlic-shtick is over the top.

Yet as the chef/owner behind two — and soon to be three — extremely successful Mediterranean restaurants, Erdem is a local embodiment of Horatio Alger: hard work, simple yet effective management, and a dose of good fortune.

“I would never tell anyone not to own their own restaurant,” says Erdem. But, he adds a warning, “you have to know you’re going to work your butt off.”

And work he has, ever since immigrating to the United States as a teenager, scraping out a living in New York City. Working in French, Turkish and American restaurants nurtured a dream born in his native Turkey, where his restaurant visions first took shape around the family table: everyone sharing, sitting closely, plenty of laughter, conversation and even music. Not just the sense of home, but the scents, too — especially garlic. Erdem goes through several hundred pounds in a single week at White House Grill.

Fast forward to the 1990s, with Erdem working in restaurants, but not yet in the kitchen. At Salty’s (now Anthony’s), for example, he impressed management into thinking Erdem should join their ranks. After four months, though, they reconsidered. “Too much, not what they wanted to hear,” he said, laughing about the irony of being let go for his blunt style and wanting to do what’s best for the customer — the very thing that’s made him successful as a chef/owner.

Unfazed, Erdem and a friend opened White House Grill in a former Post Falls sandwich shop so small that those waiting for a table had to do so outside. The menu was a hit, blending Italian, Greek and Turkish dishes like Chilean sea bass, gooey French onion soup and Kuzu Makarna (chunks of lamb, mushroom, onion and linguine swimming in a wicked, garlicky broth). They expanded, eventually outgrowing the building altogether.

Poised to parlay the experience gained from starting small, Erdem found himself going solo, eyeing a nearby building that is now unrecognizable as a former bank. Inside are framed images of the Mediterranean coastline, slightly askew on the walls; cozy tables are packed together in strategically sectioned areas. There is a steady stream of Turkish pop music and an occasional belly-dance troupe. And, of course, wafting garlic.

While Erdem built a loyal White House Grill customer base, the former restaurant site was once again available. He called the new place the Oval Office, specializing in eclectic bistro food and martinis, like the “Dirty Monica.” (Nudge-nudge.)

Continuing in the presidential theme — and with ambition to spare — Erdem will launch the West Wing in October at the former Lazy Bones location on 4334 S. Regal St. Concerned with the growing wait list at the Post Falls location and noticing that many customers were from Washington, Erdem will duplicate the White House formula across the border, right down to the enticing smell of garlic.

“I like to challenge myself,” says Erdem, who is undaunted by the prospect of running three places simultaneously. He readily credits his success to good fortune and being surrounded by good people, especially the staff, whom he likens to family.

And how would Erdem’s relatives react to his latest venture? They’d want part of the profits, he jokes. But there’s a thoughtful tone in the voice of this nowgrown man who spent his young-adult years in America, nurturing his dreams and working to make them happen. When it comes to his family, Erdem says, he has but one thought: “I owe them.”

Get a chef to confide in you*, and one of two things will happen. If that chef is passionate about her work but works for someone else, she will undoubtedly talk about the frustrations and constraints of working around customers’ whims — or, maybe worse, an owner’s perception of a customer’s whims. She’ll talk about wanting to be free to make her art on her own terms — to open a restaurant that is only hers, and to make the food she loves making, regardless of who comes in the door.

Now get a chef who is also a restaurant owner to confide in you. She might complain about many things — payroll, a ruined panna cotta, an inexplicable kale shortage — but she won’t complain about feeling boxed in. At worst, she’ll feel misunderstood. But feeling misunderstood is a trait of all artists, isn’t it?

The chefs in Dining Out 2010 belong to that latter category. They have taken on tremendous personal and professional risk in the hope of reaping the tremendous reward of both freedom and success at the thing they love most. Their food and their stories inspire us. We hope they inspire you, too.

* This may take a drink or two, and you may have to do some confiding yourself.