How the bomb that didn’t go off changed the Martin Luther King Jr. Day Unity March. 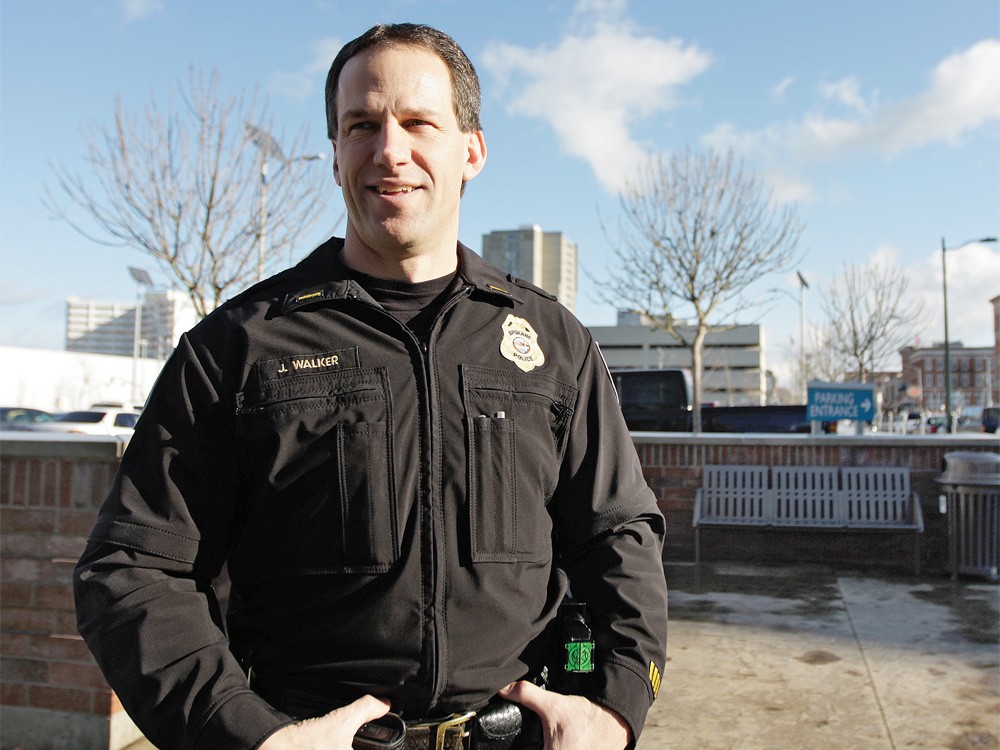 Young Kwak
Spokane Police Lt. Joe Walker standing in front of the bench where the backpack bomb was left. 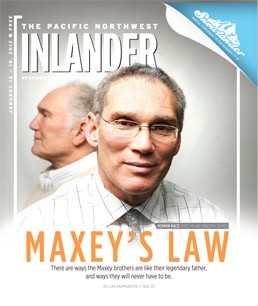 "Surviving is One Part of It": The first in a series of stories on race in the Inland Northwest

Fostering the Dream
Members of the YWCA will discuss women and the civil rights movement on Jan. 17 at noon. Women’s Resource Center, WSU, Pullman, Wash., mlk.wsu.edu (509-334-0279)

He’s back organizing the march again this year, but with a few tweaks. The guests will be different. The bomb squad will be on-scene. And, if Spokane’s law enforcement has anything to do with it, there will be no bomb.

“You know, we still have the same basic format that we’re going to be doing,” Bush says. “Of course, security and safety are significant based on the ugly that took place last year.”

Last year, quick thinking from police and city workers prevented the march from turning into a bloodbath after a bomb was discovered along the route, at the intersection of Main Avenue and Washington Street downtown.

A federal investigation netted Kevin Harpham, a 37-year-old Stevens County resident, on charges related to planting the bomb. He eventually took a plea deal and was sentenced to 32 years in prison at the end of the year.

With the culprit behind bars, police, city officials and the march organizer say there are two things left to do: secure the parade, and stand up against the hateful motivations that brought Harpham and his bomb to the downtown intersection.

“Let’s remember, first of all, this man was not from Spokane,” Spokane Mayor David Condon says of Harpham. “But that’s not to say that we shouldn’t be reminded on an annual basis, if not more often, that we’re dealing with issues of hate and discrimination.”

Spokane Police Captain Frank Scalise was in a meeting of department heads when he first heard that something was wrong down at the Martin Luther King Jr. Unity March. An officer called asking if he could reroute the parade. Scalise told him yes.

Doing so took marchers away from a backpack stuffed with explosives and poison-covered fishing weights that would have been remotely detonated. Authorities later revealed that the bomb would have gone off, and that the only reason it didn’t was because the route took Harpham out of range of the wireless car starter he carried to activate the device.

This year, Scalise will be there himself, as will a number of his officers, though he declined to say how many.

But it will be enough, the captain says, to put an officer on each corner of the march, have the bomb unit downtown during the event, and have a lieutenant command the entire affair.

He added that he has received no threats of attack against the parade.

Beyond disarming the bomb, Scalise says Spokane police have not had much to do with last year’s incident. Catching and convicting Harpham was the work of federal law enforcement.

U.S. Attorney Michael Ormsby was working in his yard last year when he got the call.

“It was one of those ‘We don’t really know what it is yet but it looks like an incident, and, you know, be aware,’” Ormsby recalls of his conversation with FBI Supervisor Frank Harrill that afternoon. Ormsby had been on the job for three months.

In the early stages of the investigation, before Harpham was caught, Ormsby says he didn’t ponder the motive or the identity of the perpetrator.

“We don’t assume that any person that may have [committed] a crime has any particular profile,” Ormsby says. “And so you go where the evidence takes you.”

But the actions of people like Harpham were no surprise to Ormsby. In some ways, he had been expecting him.

“The biggest risk to national security in this part of the country is not international terrorism; it’s domestic terrorism,” Ormsby says. “Unfortunately, I think there’s an element of people that live in this region that find it very hard to be fully integrated into a vibrant and open society.”

Scalise agrees. “Spokane, Coeur d’Alene area… is really the largest area between the Cascades and Minneapolis,” Scalise says. “I think that’s why people come here to make their point, because it’s a bigger stage, whether that’s a positive point they’re trying to make or if it’s something more nefarious.”

In the months that followed Harpham’s capture, Ormsby oversaw his prosecution and plea-bargaining.

At his sentencing in December, Harpham refused to take responsibility for the bomb, saying he was innocent. Still incarcerated in Spokane County Jail, Harpham has filed a motion to reconsider the plea, citing a new report that, he says, casts doubts on the functionality of his bomb. U.S. attorneys have until tomorrow to respond to the motion.

Regardless of the outcome of the motion, Ormsby believes the city must look beyond the march.

“It isn’t just attendance at this event,” Ormsby says. “It’s a recommitment by all of us who believe that way that we’re going to be more sensitive … to be sure the community doesn’t forget that what makes this community such a great place to live is the diversity of viewpoints.”

Before last year’s march, Sue Kellogg says the most harrowing thing that she could have imagined happening at the intersection of Main and Washington was a car hitting someone in the crosswalk.

But for the past year, Kellogg has had FBI agents come into her business, The Eye Care Team, and inquire about the thickness of her windows. From her business, she can see the bench where the backpack was left, and she says she often thinks about that day.

This Tuesday, Spokane police released the route of the march. It will be the same as in years past, beginning at the INB Performing Arts Center, going down Bernard Street and then along Main to the River Park Square mall.

Bush had been unclear as to whether the march’s route would be made public. But Joe Walker, the lieutenant overseeing the event, says police felt comfortable doing so. It came down to an issue of convenience.

“It’s something that people wanted to know, so that was a courtesy to people coming down,” Walker says.

The march itself, however, will carry an element of defiance. “We don’t want them to win,” says Walker.

No Fear in Love: Race focuses on healthy teen and young adult relationships