On the eve of another Memorial Day, one local Pearl Harbor survivor retells a story that will never be forgotten 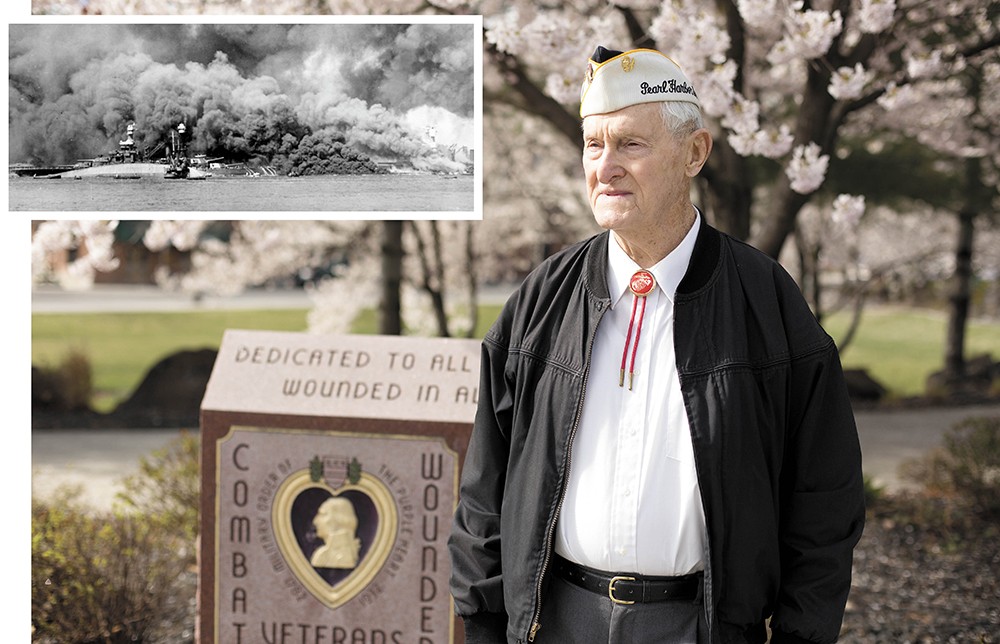 Young Kwak
Ray Garland at the Purple Heart Memorial outside the Spokane Veterans Memorial Arena. INSET: The half-sunk, burning USS Oklahoma on Dec. 7, 1941, just as Garland would have seen it.

It was just before 8 am when he and a couple of fellow Marines were raising the flag over the battleship USS Tennessee, just as they did every morning. But it wasn't just any morning at Pearl Harbor; it was December 7, 1941, and all hell was about to break loose.

"I heard some explosions and some airplanes, so I turned around and looked back towards where I thought they were coming from," recalls Garland.

Japanese planes were dive-bombing the air station on Ford Island, raining bullets on the eight battleships moored nearby. Garland was in the Marine security detachment, and he was put to work tending to the dead and wounded on the forward part of the Tennessee.

"I could look over and see the Oklahoma, and just as I looked over there, the Oklahoma turned upside down," says Garland.

There were 429 killed on the USS Oklahoma during the attack, among 2,403 total deaths on the day that marked the start of World War II for Ray Garland and the United States.

Garland is one of the few remaining members

of the Lilac City Pearl Harbor Survivors Association. As a 19-year-old from Butte, Montana, Garland had just joined the Marine Corps a few months before that fateful morning.

"I knew that the war was about to start," he says. "I looked at a LIFE magazine, and I seen pictures of these Marines, and I thought, 'Well, I'll try joining the Marine Corps.'"

With no recruitment office in Butte yet, it wasn't easy. Garland spotted a tiny ad in the newspaper for a temporary sign-up office in the Hotel Finlen. He showed up and was the first to enlist in the old mining town. He shipped out to Hawaii soon after.

"The real story of what happens when America goes to war will never be found in the memoirs of the officers or the politicians who planned and organized the battles," says Carol Edgemon Hipperson, the Spokane author of Radioman: An Eyewitness Account of Pearl Harbor & World War II in the Pacific. "It's in the memories — and the nightmares — of the young men and women who fought them."

As Garland cleared the bodies of his comrades

from the deck and as the Oklahoma listed sideways, oil from the USS Arizona spread across the surface of the water and caught fire, igniting the Tennessee. Garland grabbed a fire hose and began fighting the flames. As he was dousing the fire, the second wave of Japanese bombers attacked.

"We opened up the hatch to go to the officers' quarters in the back, and when we was down there we had the fire hose, and when we looked over at the bulkhead I could see flames going," says Garland. "The insulation had burned all of the electric system, and when we turned the fire hose on again... that's the last I remember about Pearl Harbor, because it knocked me down and blinded me for a couple days. I ended up in sick bay."

Garland was awarded a Purple Heart for his service at Pearl Harbor. He was patched up and stayed in the Marine Corps, serving in bomb disposal. When he got out, he joined the reserves because the pay was enough to cover his house payment; he remembers feeling sure there wouldn't be another war. Garland was busy building a business and a home when the Korean War broke out and he was called back to service. There, at the Battle of Chosin Reservoir, he suffered a gunshot wound, earning a second Purple Heart.

"Ray and the other survivors are a tremendous force of history," says Hipperson. "The past is prologue; when you study military history, you understand why the world looks like it does today."

Surviving two wounds that could have ended his life gave Ray Garland many more years. He left the military in 1952 and moved to Spokane, where he started a family and opened a carpet and drapery business on Division Street. He retired to Coeur d'Alene, where he lives with his second wife, Beverly. Even after all these years, Garland remembers it very clearly, wearing his Pearl Harbor cap as he tells his tale with the stern and deliberate demeanor of a Marine for life.

"Being in there," Garland adds, "well, you don't forget something like that." ♦