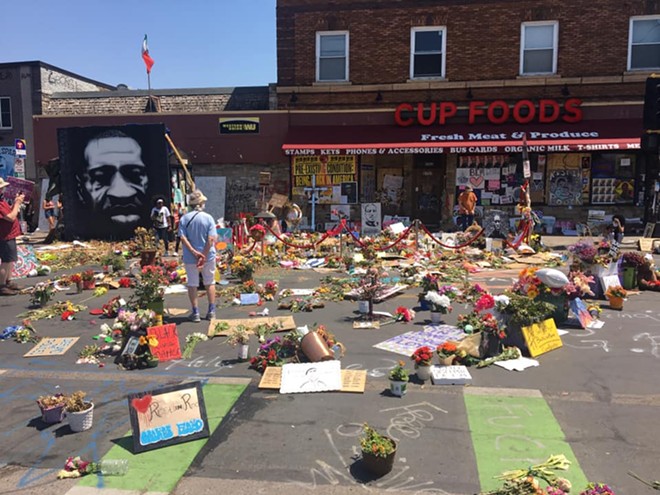 Matt Slater
Memorials to George Floyd outside the Minneapolis convenience store where he was killed.
The hard rock duo The Smokes rose to prominence in Spokane for their punchy style and stinging, socially conscious lyrics, and we all lamented when cousins Himes Alexander and Matt Slater moved to Minneapolis in 2017 and took the project with them. 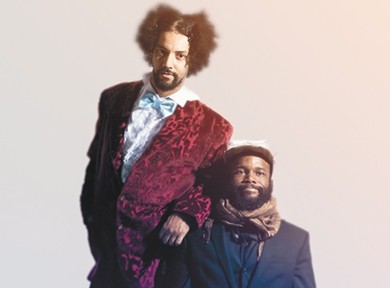 Kristen Black
Matt Slater (left) and Himes Alexander of The Smokes
Known for a bustling music culture that birthed the likes of Prince and the Replacements, Minneapolis has, in the last few weeks, been a flashpoint for protests: After George Floyd was killed by a Minneapolis police officer in May, locals began a massive demonstration against police brutality that has spread around the world. Slater, the Smokes' drummer, has been at the center of the protests and has been documenting them on social media, and he spoke to the Inlander last week about the experience of being on the frontlines of an international social movement.


"We should have dealt with this a long time ago," Slater says. "It’s been blatant and in people’s faces for hundreds of years. We’re going to keep moving forward from here, but some people have to be left behind. That’s just the reality of it: We’re not all going to make it there together."

Responses have been edited for clarity and space.

INLANDER: How frequently have you been at the protests?
MATT SLATER: I’ve been at the protests every day except one. I went to [George Floyd’s] funeral, and that was a heavy burden. There were no protests. Some people had to be told, “This is not the place. We’re not doing chants.” It was a very somber experience. It was at North Central University, and that’s in downtown Minneapolis. They had a sound system set up on top of the building next to it, so the sound going on in the room was getting pumped out and you could hear what was happening in real time.

I’m sure it’s difficult to distill all the feelings of the protest into a single observation, but how would you describe them based on what you’ve seen?
The word that comes to mind for me a lot is “juxtaposition.” People are like, “Oh my god, how exciting is it to be here for this?” And no, it’s not exciting. It’s heartbreaking. It’s inspiring, but it’s inspiring because my heart’s broken. The day after they burned the precinct, you stand there and peacefully protest, and the cops would surround all the protesters in front of the station. And literally across the street at the Target, people are looting it in broad daylight, no cops in sight. I mean, the protest on the bridge when they shut down traffic — moments before that truck came through, I was talking to a photographer, and he said “Isn’t this beautiful?” That juxtaposition is crazy. I think I’m probably a changed person from being around it all the time. But to see the cops surround peaceful protestors and allow looting to take place, that’s an image where you think, “America is broken. What is going on here?”

I keep thinking that some of these images coming out of the protests will be talked about and reprinted in history books for years. Does it feel that way to you?
Does it feel historic? I mean, it feels overdue, to be honest. But I mean, homie who drove that truck didn’t get charged. When Trump tweeted that “once the looting starts, the shooting starts,” and how that’s a throwback to old racist shit somebody said a long time ago — is it historic? There’s some systemic shit that hasn’t been dealt with, and now people are paying a little bit closer attention to deal with it.

Shortly after the protests began, the Minneapolis City Council announced its intention to restructure the police department. What was the reaction to that?
There’s a group called Black Visions Collective that’s been talking about defunding the police for years. They were at that rally, with the nine city council members. But you’ve gotta understand: Everybody that’s there already wants to defund the police. So the reaction on the ground was, “This is awesome. Let’s go.” But that’s not really the issue. The issue is the people that aren’t there and what that means. They get done with that emergency city council meeting, but I was questioning, how much power does the city council really have? The mayor [of Minneapolis] doesn’t want to defund the police, the governor doesn’t and the president sure doesn’t want to. So we can talk about it, but do we really get to do it? Is it really going to happen? Sure, thousands of people are cheering for this to take place, but I see you, America. I know how long it actually takes. I know people just want this to blow over. So, we’ll see. 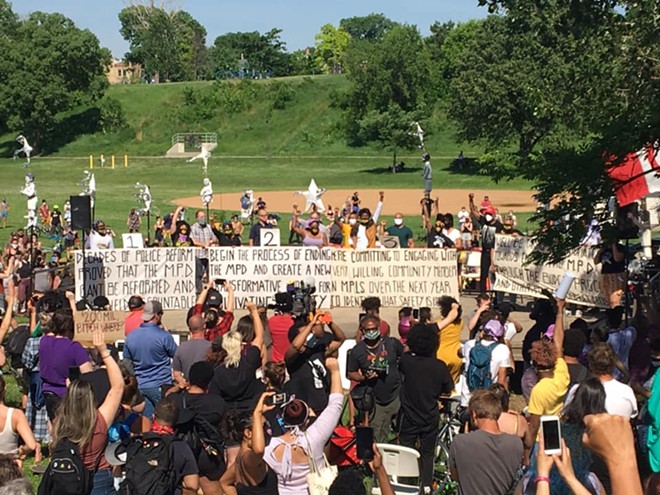 Matt Slater
The Minneapolis City Council announcing its aims to restructure the police department.
Have you seen anything specific or heard any stories at the protests that have stuck with you?
Just in general, teenagers are running this, and it’s very exciting to see. This generation after me, they’re the ones that can actually do this. I don’t know where my generation’s at; I don’t know where the 30-year-olds are. But when it comes down to it, at a protest or a rally, I look around and I’m the old guy there. That’s just a beautiful thing to see. People are pretty good about taking care of each other. The organizers running these protests are doing amazingly.

A lot of the stories coming out of the protests are gaining traction on social media, and it seems like that’s how people are communicating on the ground. And that’s where I’ve been seeing so much footage, including the pictures you were sharing.
Yeah, and the only reason I’m doing that is I feel like — I honestly don’t watch a lot of news. I watch our news to see what’s happening here, but I don’t think you guys even get to see it. A lot of times, people will send me somebody’s speech that I watched live, but they’ll only show parts of it. Like, yeah, that part of the speech was fine, but what about the part he said after that? And that’s why I want to take pictures, because this is what’s actually happening here.

Yeah, Twitter has been a valuable resource for seeing images I’m not seeing anywhere else.
I mean, the first night of our curfew, when the National Guard's cops were walking down the street and shooting at people in their own yards — I saw that. I felt that. I don’t know if the outrage has been adequate yet. Some people still don’t believe that what's happening is actually taking place. There’s just this growing database of this footage. It’s all over the country, it’s all over the world, it’s undeniable. People getting shot at the bus stop with their groceries, getting shot with rubber bullets in the face. At a certain point, some people — I feel like if it doesn’t happen to them, they just don’t think it happens at all.