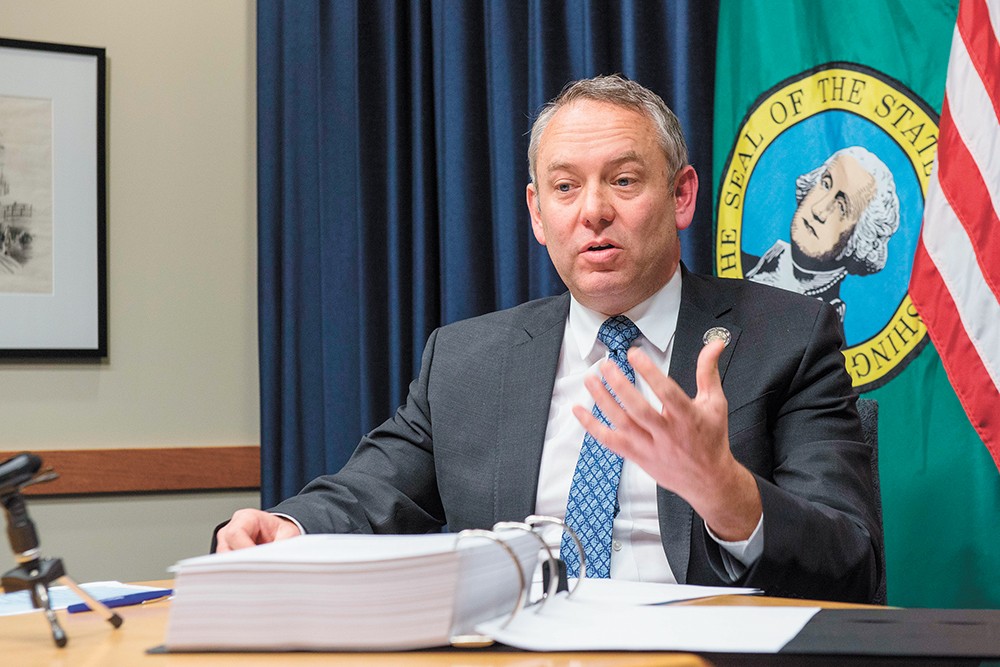 Daniel Walters photo
Mayor David Condon is not a fan of the last-minute budget changes — which include a big staffing boost for the City Council.

In the summer of 2011, back before Mayor David Condon or City Council President Ben Stuckart were ever elected, Stuckart sat down with the Inlander and gently brought his two fists together, as if to say this is how the relationship between the mayor and the City Council should work.

"Tension in government is how things get done," Stuckart said back then. "Since we've switched to a strong-mayor form of government, we have not had a City Council president who has understood the role. ... Blindly following gets us nowhere."

And that, at least, was one campaign promise he kept. The next eight years were defined by battle after battle between the Mayor's Office and the City Council, as council members pushed to expand their role, and the mayor fought back.

Even as Stuckart has intentionally stepped back in his final weeks on the job, his successor, Council President-elect Breean Beggs, has grabbed that baton: With only a few day's notice before the council approved the budget, Beggs introduced a slew of last-minute changes to Condon's budget that included another expansion to the size and power of the council's offices.

But the mayor hasn't been willing to leave without a fight. He held a press conference of his own in response. He sent out a press release condemning the council's latest budget as "nothing more than a money grab designed to fund their pet projects."

"As of late, City Council seems to increasingly be forgetting that they serve the citizens of Spokane, not their own self-interests," Condon wrote.

Beggs, however, argues that Condon's opposition goes beyond the merits of their proposal.

"My sense of it is is that the mayor, for whatever reason, is grumpy on his way out the door," Beggs says.

Critics of the Spokane City Council were complaining about mission creep way back in 2014, lamenting the way that council's budget of around $955,000 had climbed by more than 43 percent in eight years.

In 2014, conservative council members Steve Salvatori and Mike Allen proposed asking voters whether the council job should be officially considered full-time or part-time. But liberals on the council swatted down the idea immediately.

"If you gave citizens a hundred issues the city deals with, this would be number 100," Stuckart said. "They are more worried about their streets, public safety, downtown, jobs and economic development."

But two years later, behind closed doors, council members made the argument to the Salary Review Commission that, in fact, they were working full-time and were underpaid.

"This is not new. The council and I have debated this several times," Condon says. "If we've decided we want full-time city council members supported by full-time staff, I believe that that should go to the people to vote on."

Today, the council's budget is more than $1.6 million. And Beggs' budget increases it to almost $2.2 million — a 35 percent increase in one blow.

It would include hiring a full-time council spokesperson and new research assistants. They'd upgrade the council's lobbyist — the intergovernmental-affairs position — into a full-time job. Legislative assistants would get another big raise. The council office's travel budget would be increased to $10,000.

Beggs says the intention isn't to replace anything the mayor is doing — but to do more of what he hasn't been doing. It's complementary, he says, not contradictory.

"In the administration, people are trying to do operations and policy development at the same time, and that's challenging," Beggs says. "A lot of this budget is about identifying areas where the city has been slow to develop policies to address issues."

The City Council has repeatedly expressed frustration over getting clear and quick answers from administrative staff on major questions, with some staff members being told they're not allowed to speak directly to council members at all.

But observers like former Councilman Salvatori argue that speed is not necessarily a virtue.

As both branches have looked to expand their influence, the fights have gone both ways.

During the mayor's two four-year terms, council members repeatedly objected to Condon's attempts to whittle down the number of positions governed by the "civil service" bureaucracy, while expanding the number of highly paid "exempt" positions that he could hire directly.

But Condon fought back against the council's attempts to constrain his staffing decisions, arguing that the City Council was overstepping its authority. Sometimes Condon vetoed council ordinances — he vetoed more council bills than the four past mayors combined. Other times, he simply refused to implement them. Back in 2017, the council created five garbage collector positions, but the mayor simply refused to fill them.

But Beggs' budget not only resurrects those five garbage collector positions, it stipulates that if the mayor doesn't fill those positions, that money would be swept up and put into a "Sustainability Opportunity Fund" that could be used only for certain "innovative" initiatives. (On Monday night, however, the council delayed a vote on officially creating the Sustainability Opportunity fund, and two similar funds until next year.)

Beggs is quick to point out that his proposal doesn't technically add a cent to the budget.

Instead, the City Council intends to pay for the council's budget by doing things like eliminating vacant positions — like the position for the economic development director — and grabbing unused funds earmarked for the Spokane County Jail.

But when Condon looked at the council's initial budget proposal, he saw a variety of rushed and half-baked ideas. In an email sent out Monday morning, he even suggests the council's proposals could put the city's credit rating in jeopardy.

Asked by the Inlander if he sees this fight as a kind of capstone of eight years of philosophical fights over the council's role, the mayor readily agrees.

"Absolutely. There's a philosophical divide," Condon says. "I think it's important that we have these debates."

At least one vote against the council's budget on Monday night was unexpected. At his final meeting on the council, conservative Councilman Mike Fagan says his big problem with the council budget isn't the financial piece — the council budget is still tiny compared to the $1.1 billion city budget — but the adversarial nature of it.

"It's the perception that what we're trying to do is to compete with the Mayor's Office," Fagan says.

Yet another objection comes from a more surprising quarter: Stuckart announces that while he supports the budget as a whole, he opposes one part: A proposal to spend $120,000 to hire a full-time spokesperson for the council.

"I think if you work well with the administration, you can share their numerous public information officers," he says. Stuckart doesn't think it's necessary — and two other council members agree.

However, Beggs says that, in his opinion, the mayor's spokeswoman put out an inaccurate statement about the council's budget in the last few days.

"I can't imagine going to that person to put out information about the budget," Beggs says. The budget passes, with all the new positions for the council intact.

Meanwhile, one of the most important figures has remained comparatively silent: the mayor who will actually be implementing it. The next mayor, Nadine Woodward, spent the campaign excoriating the council for failing to effectively work with the mayor — and promising that she'd go through the budget line by line with a scalpel to find big savings to fund more police officers.

Woodward hasn't joined the mayor in his condemnation of the council's budget revisions. The mayor-elect didn't return an Inlander request for comment before Monday's council meeting, and Beggs says that he didn't hear any objections from her about the budget.

"She's wisely staying out of that fight," Beggs says. He and other council members express optimism about working with Woodward going forward.

As for the current mayor? Stuckart lobs one last insult his way.

"He's being totally crazy, attacking council," Stuckart tells the Inlander. "I just want to go out with the least amount of controversy possible. ♦