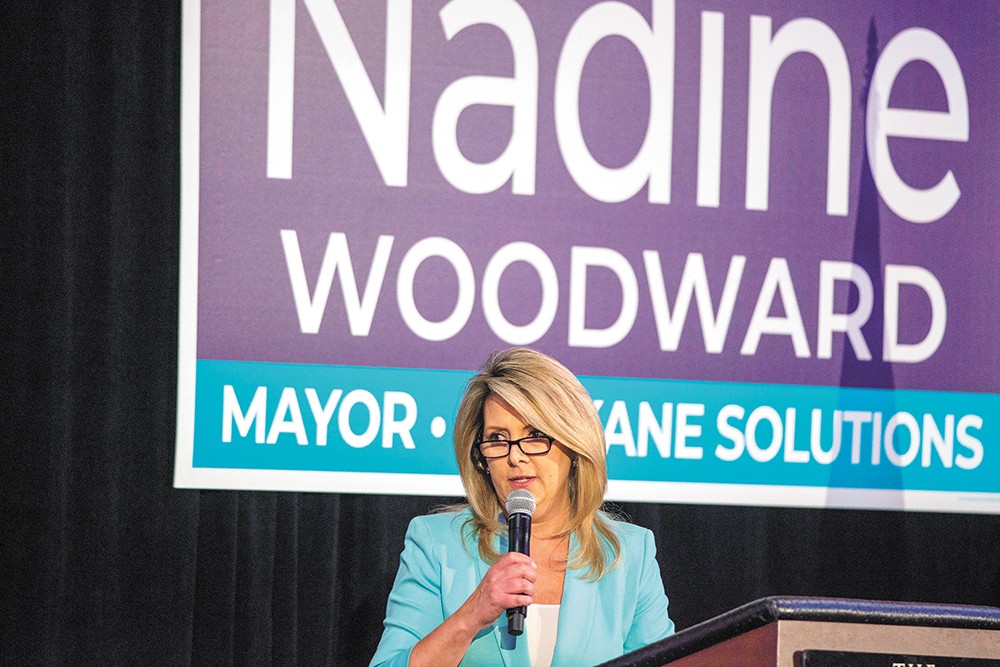 Daniel Walters photo
The Inlander has repeatedly requested an interview with Nadine Woodward, including in person after her May 8 campaign fundraiser.

UPDATE FROM THE EDITOR: Mayoral candidate Nadine Woodward and her campaign manager, Abra Belke, came to Inlander HQ on Wednesday, June 12, and met with me and Publisher Ted S. McGregor Jr.

Woodward said that there had been a misunderstanding. Despite the Inlander’s numerous requests for comment on general and specific issues like homelessness and our attempts at scheduling phone or in-person interviews dating back to January, Woodward said her intention was only to decline one interview and not all interviews with the Inlander.

During our meeting, Woodward readily agreed to do a sit-down interview — she says her first availability is about two weeks from now, June 26-28 — and we fully expect to confirm a date and time for that interview soon. I would add that Woodward made good on her promise to be more accessible later that same day, quickly conducting a phone interview with an Inlander reporter who’s writing about a campaign issue for next week’s issue.

A few months later, Woodward retired from TV and then launched her campaign for Spokane mayor in April.

But Woodward is shaping up to be a different kind of politician than the other two on stage. Brown and McMorris Rodgers were willing to spend hours speaking with the Inlander, both in person and over the phone, as part of their duty in seeking public office, and subjected themselves to any question we could think of.

By contrast, Woodward, in a brief phone conversation last Friday, explained that she had decided not to grant the Inlander any phone or in-person interviews and instead would only respond to questions via email.

Her refusal to directly answer questions from an established newspaper is drawing fire from both media experts and her political rivals who say it's especially ironic — and troubling — that a former journalist would hide from the press.

"I don't know what the candidate's reason is, but it strikes me as unfair to the other candidates in the race," says Seattle Times political reporter Jim Brunner. "There's a perceived advantage in being able to not have the give-and-take in the verbal interview, to be able to write up something that's a talking point."

A BACKGROUND IN MEDIA

If anyone should be prepared for the challenges of a media interview, it would be Woodward. She had worked as a news anchor since 1985 — eight years before the Inlander started printing. Indeed, in an interview last week with KHQ's Stephanie Vigil, Woodward repeatedly cited her journalism training as proof of her ability to be a great mayor. When Vigil asked about whether she'd be transparent, Woodward touted their shared experience as anchors.

Even before Woodward officially announced her campaign, Inlander reporters had requested a sit-down interview. For the past month we've repeatedly asked that she meet with us to talk about homelessness — one of the pillars of her campaign. On multiple occasions we had an interview scheduled with her campaign, only to have it canceled.

"I was at an event this morning where [Woodward] was campaigning about transparency or openness, but I guess it's only openness to whoever is giving money."

Finally, late last month, her campaign director called to say that Woodward was worried about how her interview answers might be used, claiming she had heard something "that concerned her about a question from an interview, done several months before with a candidate, being recycled for future stories without followup."

In a brief conversation on Friday, Woodward alluded to the complaint without providing other details.

"I don't like the idea of being recorded and then the conversation being used throughout the campaign out of context," Woodward said. "I think that's manipulative and I don't need to be a part of that."

Woodward never checked with the Inlander to see if the allegations were true and refused to say which candidate she was referring to.

"I'm not going to tell you who that is," she said.

Woodward is free to record her interviews with us — something we encouraged in our conversation — and if she ever felt misrepresented, she could point to the audio to correct the record. She argued that would be too much of a hassle and attacked the Inlander itself.

"You have an agenda," Woodward said. "You work for a publication that definitely puts a slant on things. I don't feel the way that you cover certain candidates is objective, impartial or fair."

The conversation lasted less than six minutes before Woodward ended it to go to a meeting. She didn't elaborate on why she thought the Inlander's coverage was slanted and offered no evidence to support that claim.

A QUESTION OF TRANSPARENCY

If nothing else, the Inlander's unsuccessful attempt to get a one-on-one interview with Woodward provides a key contrast between her and her competitors.

Mayoral candidate Shawn Poole's been talking to the Inlander for months; he's met with the Inlander in person and spoken to us by phone, text messages and via Facebook. While Poole didn't get back to us for this story, his campaign manager called to set up a one-on-one interview. Meanwhile, Woodward's other three competitors returned our call within a few hours.

"I was at an event this morning where [Woodward] was campaigning about transparency or openness, but I guess it's only openness to whoever is giving money," mayoral candidate Kelly Cruz says.

Cruz says that he'll not only return phone calls from the press, he'll hold "Mondays with the Mayor" for two hours every week, where he'd talk with any citizen who swings by City Hall.

Mayoral candidate Jonathan Bingle was not only willing to have a one-on-one interview with the Inlander, he reached out and pestered us to make it happen.

Meanwhile, for all the controversies City Council President Ben Stuckart has been a part of, he's remained accessible to even irritating reporters. Sure, he's sometimes frustrated with the media — including the Inlander — but that's part of the job, says Stuckart.

"How you run for office reflects how you govern," Stuckart says. "If you're going to run a campaign without being transparent and talking to the press, you're probably not going... to be transparent as mayor."

THE TROUBLE WITH EMAIL

Woodward's argument that answering questions from the Inlander only over email is sufficient is a surprising stance for a former journalist. Most journalists frown upon email interviews, arguing they should only be used as a last resort (which is generally the policy of the Inlander).

"In-person is almost always the best. You can judge people's reactions. It's easier to ask follow-up questions," McPherson says. "It usually makes the interview more productive on both sides."

If you do an email interview, McPherson adds, you can't know whether the person you sent the questions to is the same one answering them.

As a former TV anchor, Woodward is in a position where people feel like they know her, while rarely ever having heard her own thoughts or beliefs. She's both the woman everyone knows and mostly a blank slate.

"It's especially sad that Nadine Woodward, who is a quote-unquote 'former journalist,' wouldn't understand the process," McPherson says. "Or maybe she does, and that's why she's doing what she's doing." ♦

Regarding the charge that the Inlander has an "agenda" in covering this 2019 Spokane mayoral race: The Inlander's only agenda is to cover political campaigns and the workings of our government as a public service to our readers. We attend public meetings, put probing questions to public officials and watchdog the government's purse strings because that's what journalism is meant to do. It's precisely the role the Founding Fathers envisioned. As Thomas Jefferson, who despised much of the press, argued: "Were it left to me to decide whether we should have a government without newspapers, or newspapers without a government, I should not hesitate a moment to prefer the latter."

We aren't in the business of doing PR for any candidate or political party; our owners do not have any financial interests dependent on city policy; and we don't have a rooting interest in the news, except in the principled belief that the public has a right to know about its government and the people who would seek to lead it.

We're not perfect: If we get something wrong, we'll fix it. If any political candidate feels that he or she has been misrepresented, please let me know (email jacobf@inlander.com or call 325-0634, ext. 261). However, we have no way to respond to unsubstantiated, vague claims of bias.

Here at the Inlander, we plan to cover this coming mayoral election the same way we have for more than 25 years — by being fair and transparent, and by directly asking questions, in person and by phone, of those seeking public office. And our door will remain open to anybody who seeks to lead Spokane into the future.