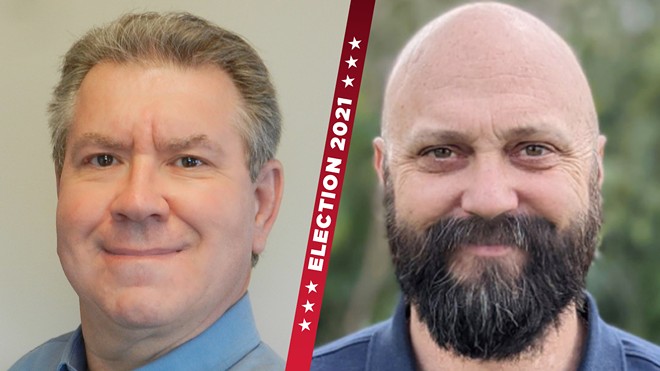 But Millwood, the small town of less than 2,000 people between Spokane and Spokane Valley, has its own issues. Freeman has campaigned on the promise to continue to improve the town — namely, traffic congestion and increased law enforcement patrol.

His opponent is MATTHEW DEAN, a political newcomer. Dean served in the U.S. Navy before working for a local aerospace manufacturer for seven years. He also volunteers with Blessings Under the Bridge, which provides meals and other services for people experiencing homelessness.

Post Falls, like the rest of Kootenai County, is growing. And it's growing fast. RON JACOBSON, the Republican incumbent mayor, has told the Inlander that, ideally, Post Falls could stay the way it is now, but he recognizes that's not possible. As mayor, he's said that he shares citizen concerns about too much new density, but he knows it's not possible to prevent development from happening, and he wants to ensure that there is infrastructure in Post Falls that keeps up with the growth.

Jacobson's opponent, AUSTIN HILDEBRAND, is a local brewery owner and leans more libertarian. In a Coeur d'Alene Press questionnaire, he says he's concerned with the housing market prices in North Idaho and says there needs to be more housing supply. Yet at the same time, he says he's against any development program that would provide high-density housing.

On COVID-19 policy, neither support any mask or vaccine mandate right now, though after the Post Falls council voted down a mask mandate last fall, Jacobson said he would have supported it then, according to news reports. Hildebrand, in the questionnaire, says "no individual, entity, government, organization, etc. should have any control over another individual's rights or liberties."♦

HOW BIG IS TOO BIG?

After Steve Widmyer, Coeur d'Alene's mayor for the past eight years, decided not to seek a third term, it opened up the field

If you want pure political or municipal experience, JIM HAMMOND's your man: He's been a school administrator and a state senator. He was Coeur d'Alene's city administrator for four years. He even already has "mayor of a North Idaho city" on his resume. He was mayor of Post Falls from 1991 to 1996.

He calls for smart growth: diversify with small businesses instead of just relying on one or two big employers, and allow for more infill to keep housing prices down.

A former New Yorker and Californian, local retired businessman JOE ALFIERI is running on a platform of constraining Coeur d'Alene's rapid development, arguing that the "elected government of Coeur d'Alene continues to sit idly by while the city's character slowly slips away." He's okay with some amount of growth, but prefers sprawl to density.

The final candidate, MICHAEL LENTZ, made headlines recently for clashing with the Coeur d'Alene park department over permits for his dodgeball games and for accusing both Alfieri and Hammond of being too soft on growth. He just moved to Coeur d'Alene himself, but happily acknowledges he wants to shut the door behind him.