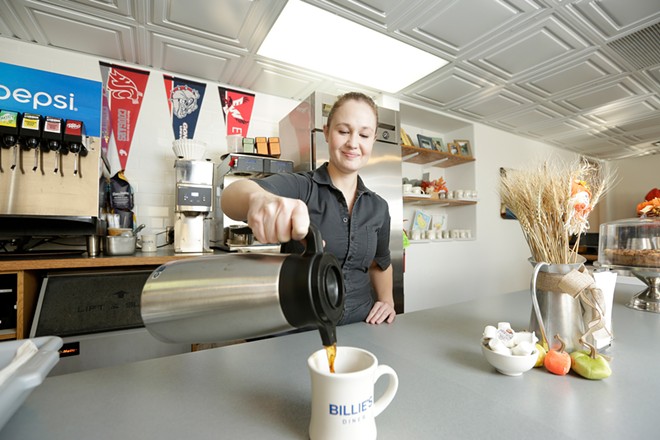 Behind the greeter's station at Billie's Diner, several framed photos of people sit on a high shelf. One of them is of a man teaching a little girl how to fish. That would be the diner's owner, McKenzie DonTigny, with her father, Billie, after whom the new eatery in Airway Heights is named. The others, however, are photos that DonTigny asked staff to bring in "of someone they love," she says.

From a booth inside Billie's on a recent Tuesday, DonTigny says she knows that sounds simple and even kind of cheesy.

It's a bluebird winter day, with all the West Plains glittering in the snow and traffic buzzing by on Highway 2 outside. A woman pulls in the parking lot, hopeful, even though the neon sign is off. Ordinarily, the diner would be open, but staffing issues felt throughout the industry have led to some adjustments.

"I mean, there's been some tough days here," DonTigny continues. "This was a two-year long process to get where we are right now, and coming back to why I'm doing this and what's important to me," she says. "The love is what keeps me going."

Love... and a clear vision of what Billie's Diner is all about: having a farmer-first and community-centered philosophy are the restaurant's mission.

The West Plains burger ($13) for example, features beef from Spangle's Browning Beef and onions from Spokane-based co-op LINC Foods. The bun is from Spokane's Alpine Bakery, which uses regionally sourced Shepherd's Grain, while the burger sauce is made in-house at Billie's.

Much of the breakfast menu like the Northwest Garden Benedict ($15), grilled breakfast sandwich ($12) with smoked gouda and Swiss cheese, and bread pudding French toast ($10) is made possible by eggs from the Reardan-based Spokane Hutterian Brotherhood.

By buying locally, Billie's Diner contributes to the sustainability of the region's farming community, which tangentially benefits local consumers at large. It reduces the carbon footprint involved in transport. And as many studies have shown, fruits and vegetables harvested while ripe are more nutrient-dense.

If there is any drawback, says DonTigny, it's that the way she wants to run the restaurant is more expensive and more work. But she wouldn't have it any other way.

"One of the goals that I went into this adventure with is I don't ever want to get to the point where I'm doing something just because it's convenient."

Billie's weekly pie offering ($4.50 per slice), for example, includes what DonTigny calls a zero-waste apple pie, utilizing the scraps from LINC's apples in several ways. Apple peels and cores can be stuffed inside whole chickens during roasting to add moisture and flavor, which you can taste in the Fairchild chicken sandwich ($15) or chicken apple salad sandwich ($14). Billie's also sends apple scraps to Spokane-based Vets on the Farm for use in its chicken feed.

Vets on the Farm, in turn, provides Billie's with seasonal vegetables like winter greens, squash, shallots and garlic for the diner's in-house roasted garlic mayo. They are also collaborating on next year's crops, including peppers DonTigny would like to have for an in-house hot sauce.

Like many eateries, Billie's features local coffee, which obviously is not grown anywhere in the Northwest, but DonTigny chose Sandpoint-based Evans Brothers because she appreciated the owners' relationship with their growers.

"Honestly, the first phase of this project — about the first year — reaching out to vendors and farmers and building those relationships was a part-time job," DonTigny says. "I spent anywhere from 15 to 30 hours researching a week.

The spent grounds get donated, too, as part of DonTigny's intention to reduce waste.

Although Billie's Diner has only been open since September, the foundation for DonTigny's farmer-first approach was laid early in her upbringing.

"I had the knowledge at a very young age where our food comes from," says DonTigny, who grew up in the Lake Stevens, Washington, area and remembers sneaking raspberries and picking green beans in the huge garden her mother grew.

DonTigny thinks she might have taken those early experiences for granted a bit, yet during the pandemic shutdowns especially, she realized how vital it had been for her and was for others.

When her job with Gonzaga University's student publications department ended, DonTigny embarked on the journey toward creating the diner. She chose Airway Heights for both its accessibility to farms, but also its increasing population.

She had also been involved with Spokane Edible Tree Project, a nonprofit that, its mission states, "mobilizes community members and resources to provide equitable access to healthy food that would otherwise go to waste," also known as gleaning.

When DonTigny found out about River City Youth Ops, formerly Project Hope Spokane, she eventually joined its board of directors. The organization works with youth ages 12 to 18 to teach them various facets of farming and food safety, including selling produce through the Emerson-Garfield Farmers Market.

"It's an organization that really resonated with my beliefs ... and something that I wanted to be a part of," DonTigny says. "It's touching on a lot of those kinds of life and job skills that you don't really get in a traditional school system. And it helps kind of go full circle in we specifically serve the West Central [neighborhood], where food scarcity, particularly for fresh food is an issue."

Although DonTigny has her hands full, that hasn't stopped her from dreaming about the future. She'd like to someday sell farmers' goods, such as eggs, as well as sauces, canned goods and other items made in-house. She has also been eyeing the small lot behind the diner, envisioning a fence, expanded garden and a someday dinner service al fresco.

Yet another project involves strengthening the avenues by which local farms can connect with customers, similar to the now-defunct Inland Northwest Food Network.

"There are a lot of challenges working directly with farmers," Don Tigny says, noting that their priority is farming, not having a website or strong online presence.

"And so part of my research was even just driving around these areas and being like, 'Oh, looks like they have corn. Let's see if I can stop in,'" she says. "So that's something that I hope to be more involved in in the next couple of years is trying to build some sort of database for the local farms." ♦