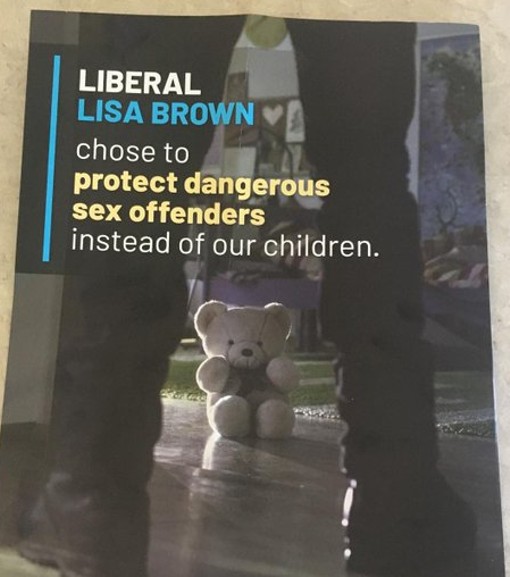 Despite a torrent of criticism, Rep. Cathy McMorris Rodgers has doubled down on her latest ad campaign that attempts to portray her opponent, Lisa Brown, as so soft on sex offenders as to be "dangerous." 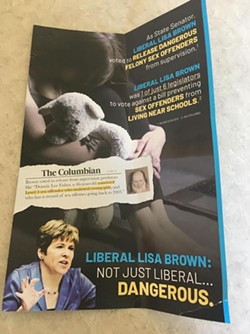 Cathy McMorris Rodgers mailer
The latest mailer includes a picture of a high-risk, repeat sex offender, that Brown supposedly supported releasing from supervision.
The first ad brochure featured a little girl swinging from a tree branch, oblivious to the hoodied man skulking in darkness nearby.

The new brochures? They swap out the hoodie imagery for imagery suggesting Lisa Brown is putting teddy bears in peril.

But both rest on two arguments. One, that Lisa Brown voted "no" on a bill in the mid-'90s that banned sex offenders from living near schools.

Brown did vote against that bill — but argued the bill was poorly written. In 2005 she voted for a bill that was arguably more comprehensive — banning sex offenders from not only living near but from child care centers, playgrounds other similar locations.

The second argument, at first glance, may seem like it is on a more solid factual footing. It's not.

To start with, it features what appears to be a clipping from a 2011 newspaper article from the Columbian.

Here's how it appears in the ad.


The latest  goes so far as to add a recent photo of Fisher to the apparent clipping, complete with a white beard, and wispy black hairs floating behind his balding head.

The article does outline the concerns of a state corrections officer that early versions of Senate Bill 5891 would have resulted in the release of criminals like Fisher from community supervision — essentially Washington's version of probation and parole.

Yet a deep dive suggests that the versions of the bill Brown voted for actually wouldn't have ended supervision for criminals like Fisher.

To start with, the same Columbian article noted the final version of the bill was amended to address all the concerns that the state corrections officer had outlined. The final bill specified "the crimes for which community supervision is required, including sexual misconduct" and lifted the original bill's one-year limit on community supervision.

That was the final bill that passed out of the Legislature. Brown — and 49 other Senators — voted to support that final bill.

So how about the first version of the bill that Brown voted to pass in the Senate? Let's get wonky.

First, to be clear, the bill wasn't focused on sexual predators at all. It was a bill about budget cuts.

Back in 2011, the recession had plunged state governments into crisis. Nearly every government agency had to make draconian cuts — and the Department of Corrections was no exception. A number of bills proposed cutting community supervision periods for a variety of different types of criminals in order to save money.

The bill wasn't sponsored by Brown. It was sponsored by then-state Sen. Ed Murray. (A  name that, after recent revelations, has, let's say, uncomfortable associations in conversations about sex offenders.)

Still, during the committee hearing, several law enforcement representatives raised concerns outlined that, because of the way the bill was initially written, it would allow more criminals — even sex offenders — to be out on the streets sooner.

During the committee hearings, Brown attempted to address those concerns:

"We are struggling to come up with a policy that does the least damage to public safety. But we want to use evidence to do that," she explained in that 2011 hearing. "We want to work with the parties with the knowledge to understand how to achieve the savings in the most public-safety conscience way."

Brown argued that the Legislature needed to make cuts, but that she wanted to do so in a way that enhanced — not decreased — public safety.

“Part of the concept of the original bill was to plow some of the savings into prevention and into evidence-based practices that enhance public safety,” she noted.

So by the it was passed out of the Ways and Means Committee, several changes had been made. First of all, the changes established that sex offenders under supervision would still be "tolled" — essentially having their supervision period extended for violations.

There had been other changes as well.

“Some of the more troublesome parts of the bill, fortunately, are now gone, and that has to do with the early release of offenders," Republican state Sen. Mike Carrell said in committee.

Much of the testimony from public safety employees focused on concerns over a provision that would have forced prisons to have released many dangerous prisoners who had earned enough time off for good behavior.

By the time the bill hit the Senate floor, that provision was removed entirely.

Yes, the bill was still poised to slash the amount of supervision for criminals — setting a one-year time limit for supervision for first-time offenders. It ended supervision entirely for those with a low or moderate risk profile. But those with a high-risk violent profile for re-offending would still be supervised.

On the Senate floor, Democratic Sen. James Hargrove amended the bill to ensure that even nonviolent high-risk felony offenders would be supervised. By very definition, that would include Fisher: As a Level 3 sex offender — with a record that included molestation — Fisher was a high-risk of reoffending.

"The intent was to make sure that dangerous offenders, violent offenders and high-level sex offenders were continuing to be supervised," Brown says today. "Those most at risk of re-offending would continue to be supervised."

And it wasn't just Democrats who voted for the Senate bill.

Sen. Carrell, the Republican who had expressed serious concerns about the initial versions of the bill argued that it wasn't perfect, but that it had been heavily improved.

“This is a bill where all of the front teeth have been knocked out and the only thing left are the molars," he testified. "It is as toothless as I think we can make it. It has been narrowed a whole bunch.”

It still took a bite out of the corrections budget, in other words, but did so in a way that limited the damage.

“We have a huge budgetary problem," Carrell explained on the House floor. "The $10 million [it saves] will help not only with but to some degree have the ability to have programming in our prisons that is going to reduce recidivism.”

And he wasn't the only Republican who voted for it. So did Sens. Joe Zarelli, Dan Swecker, Jim Honeyford and Val Stevens. Stevens is not exactly a liberal squish.

You know who else voted for it? Sen. Mark Schoesler. He's the Republican who went on to serve as Senate Majority Leader in 2015.

In other words, by the McMorris Rodgers standard, you could run this ad as well: 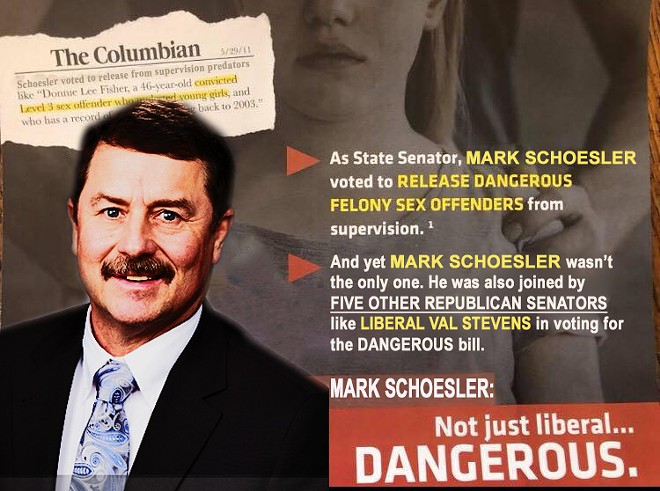 Daniel Walters Photoshop
What the Cathy McMorris Rodgers mailer would look like if applied to a Republican state senator who voted for the same bill as Brown.

Schoesler's explanation today?  He was one of the budget negotiators seeking to develop a final balanced budget in a tough year without increasing taxes. So he had to make difficult decisions.

As Senate Majority Leader in 2011, Brown was in the same situation.

In 2003, Donnie Lee Fisher was arrested for communicating with a minor for immoral purposes.

That same year, Brown sponsored a bill that expanded the definition of communicating with a minor for immoral purposes.

Her bill established that it was a crime for sexual predators to communicate with a person over the internet who they thought was a minor — regardless of their actual age. In other words, a law enforcement officer could pretend to be a minor online, in order to root out sex offenders.

It passed both houses unanimously.

Looking at the full breadth of Brown's record, to accuse her of being soft on sex offenders is an odd charge. Brown once backed a bill requiring life sentences for repeat sex offenders. She notes that she got the Legislator of the Year award in 2005 from the Washington Council of Police and Sheriffs.

"I believe she ought to disavow it," Brown says today about McMorris Rodgers' recent ads. "I’m a mother, I care about children. To put out an ad insinuating that I would knowingly side with sex offenders over the safety of our kids?"

Brown argues these ads are a distraction from the current policy issues that Congress is facing. Like tariffs. Or health care.

"I believe the Congresswoman should say, 'We made a mistake here going down this path,'" Brown says. "Let’s get down to talking about what people should care about."

McMorris Rodgers' spokesman did not return calls or emails made today or Tuesday about the advertisements.

Fugitive woman suspected of murder in jail, water on Mars and other headlines

California fire grows, so does caseload for Spokane public defenders and other headlines