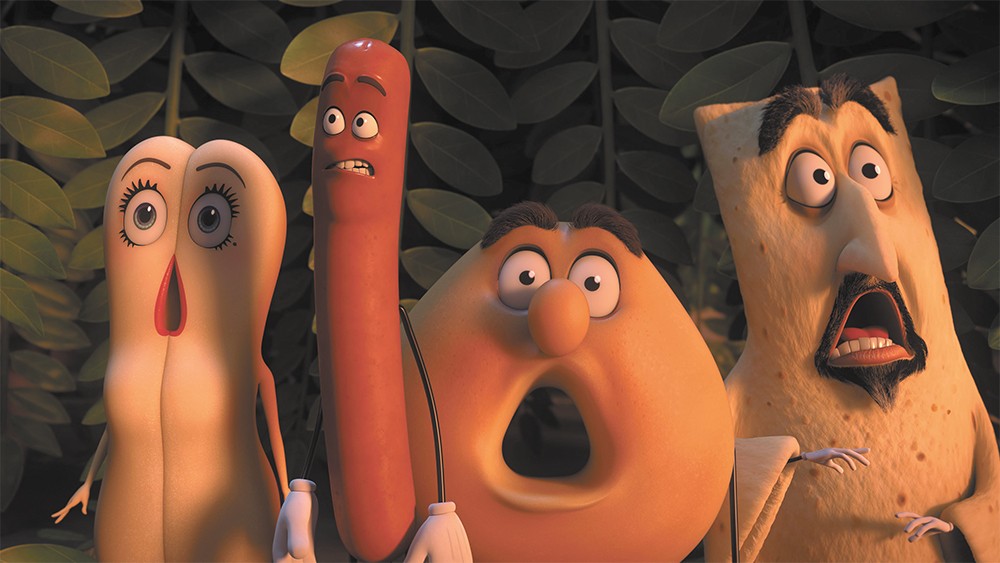 Sausage Party is a stoner comedy, through and through.

In a letter to a friend, William S. Burroughs famously explained the title of his novel Naked Lunch

by describing it as "a frozen moment when everyone sees what is on the end of every fork." At some point in human history, surely, after the third deep bong rip, some stoner must have heard that quote, grown very silent, and then wondered aloud, "But what if the food at the end of the fork, like... looked back?"

The answer to that question is Sausage Party, the adults-only animated comedy that Seth Rogen and his pals have been trying to bring to multiplexes for nearly a decade. It's a simple premise: all the food in supermarkets come to life when humans aren't paying attention, Toy Story-style. The sentient food believes that when humans put them in their baskets and leave the store, they're taking the food to a wondrous afterlife. In that paradise, a hot dog named Frank (Rogen) and a hot dog bun named Brenda (Kristen Wiig) believe they'll finally break free from their plastic packaging, have sex, and live happily ever after.

Sausage Party is a stoner comedy, through and through. Unless you're incredibly high, that means it's a mixed bag. It's packed with clever sight gags that wouldn't be out of place in Airplane!, but it's also a comedy that is precariously constructed on the belief that an anthropomorphic jar of honey mustard ranting about ejaculating in someone's eyes is possibly the funniest thing anyone has ever heard. You will probably laugh at something in Sausage Party, but the parts that fall flat are almost unbearable.

And oh my goodness, the hipster racism in this thing is off the charts. The Chinese food talks in a bad fake Asian accent, the tequila is a rapey Mexican stereotype that Donald Trump would probably find hilarious, and a bottle of Firewater brand booze is the worst Native American caricature to hit screens since Johnny Depp slapped a dead bird on his head for The Lone Ranger. Blend in Rogen's signature portrayal of women as humorless shrews and garnish with a sprig of gay panic, and you've got yourself the oldest recipe in the book: the comedian who believes he's fine because he's offending everyone equally. Really, it's more lazy than anything else.

That said, Sausage Party is at the very least something original. At the end of a godforsaken summer movie season that's been weighted down with disappointment after disappointment, at least Sausage Party has the balls to embrace an R rating (unlike, say, Suicide Squad) and tackle an original idea (unlike the ninth or 10th or 16th X-Men movie) with as much gusto as humanly possible. This is a hard-R comedy that wants to embrace concepts like atheism, the ethics of food, myth-making and mortality as a responsible philosophical retort to nihilism — even if it's only willing to do so with a stoner's superficiality.

Sausage Party is nowhere near as consistently funny as the riotous Rogen comedy This Is the End, but I would still rather watch it than a hundred clockwork Adam Sandler comedies, or the next formulaic Will Ferrell blockbuster. It is at least a movie that isn't interested in launching a franchise. It's just a good pot-infused joke that gets milked for every ounce of comedy that it's worth — and then some. ♦

Sausage Party is not showing in any theaters in the area.