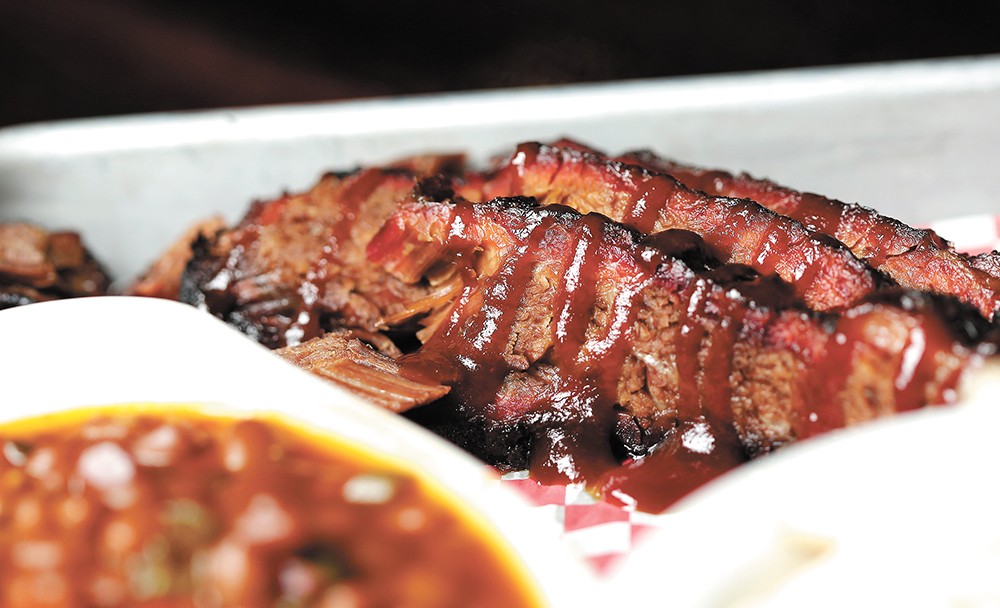 Young Kwak
The quest to become a true brisket master can be a long and hard road.

About a year after our first child was born,

my wife suggested I take up a hobby.

I'd become a guy who worked a lot and parented a lot, then filled the rest of his time with watching basketball or baseball or football, which is not the sort of guy I ever expected to become. But I didn't go out and join in on a weekly pickup game or sign up for painting lessons. I didn't start fixing up old cars. I didn't start playing guitar in a terrible '90s cover band with other stressed-out dads.

I began smoking meats. Well, a meat, specifically — the beef brisket. It's a tough son of a bitch to get right, but probably the tastiest piece of animal known to man if you succeed. It was the challenge I needed, and one that let you drink beer while confronting it.

But on a late April morning, as I stood in the rain confronting the 7-foot flames ripping out of the upright smoker I'd received from my father-in-law after it had been sitting on his deck for a couple of decades, it occurred to me that my pursuit of the perfect barbecue brisket might just burn down my goddamn house. I'd let the water pan go dry, and it had filled with fatty drippings that smell like heaven, but can apparently burn like the fires of hell. The fire ignited about three years worth of other brisket remains inside the smoker, and when I ripped off the top, I found my 12-pound piece of USDA Prime beef aflame.

While the smoker burned, sending flecks of flaming paint skyward, I yanked the meat from the inferno, singing my arm hair in the process. I poured water on my brisket, hoping to salvage the dozen hours I'd already devoted to this piece of beef. The fire itself was a secondary concern. It occurred to me at that point that there's a difference between a hobby and an obsession. Maybe Captain Ahab's wife had merely suggested he take up fishing, and things just kind of got out of hand after a while.

The brisket is part of the chest muscle of the cow.

It's a tough cut that's nearly inedible if you don't take your time cooking it, but people have been eating brisket for thousands of years.

It wasn't until the late 19th century that people started smoking it, but mainly for something that's closer to pastrami. A few decades later, folks in the South — especially Texas — began developing what we know as the barbecued brisket. In recent years, the brisket has experienced a renaissance of sorts, as more backyard cooks try their hand at it and restaurants incorporate the meat into their menu.

I'd eaten a lot of brisket before I snagged that smoker off my father-in-law's deck, but was largely clueless as to how to prepare it. I found guidance from the internet, of course.

Amazingribs.com received 34 million pageviews in 2016, and I assume most of those clicks came from guys like me, with a laptop open next to an intimidating slab of raw meat. The site is the brainchild of Craig "Meathead" Goldwyn, a Chicago-area writer and cook who has revolutionized backyard cooking by adding a dose of science to his perspective. If you're going to get into smoking, Goldwyn's 2016 book Meathead: The Science of Great Barbecue and Grilling should be your bible.

I reach Goldwyn by phone ("Meathead," he answers) one afternoon shortly after he and his staff resolved an issue that has taken amazingribs.com — among the top 20 most visited sites on the internet — temporarily offline, but he's got plenty of time to talk brisket. I tell him that he's been a virtual mentor of mine during my three-year quest.

"I'm flattered," he says, as I realize how ridiculous this all sounds. But I want to know why I, and so many others, have been lured into this pursuit.

"It's difficult, it's complicated, and it requires a little bit of understanding. It's not taking meat and forming a patty and throwing it on the grill. There's trimming and seasoning and smoking and getting it tender," he says.

Goldwyn's method is insanely detail-oriented, but he backs up his madness with the scientific help of Dr. Greg Blonder, his consultant, who helped Goldwyn prove that soaking your wood chips in water doesn't do anything (the water doesn't really penetrate the chips), fatty juices don't "soak into" the meat while cooking, and that beer-can chicken is mostly nonsense (the chicken would be dried out if you got the beer inside the chicken hot enough to release any flavor).

The process for Goldwyn's Texas-style brisket includes a salty rub of your choice several hours before the meat goes on the smoker, a focus on steady temperature (many say 225° Fahrenheit, but some go as hot as 270°), wrapping your meat in foil if the meat's temperature stops climbing and countless other instructions, including how you slice the finished product. But a lot of success depends on what meat you begin with.

"Knowing your butcher is more important than knowing a stockbroker. You can pick stocks if you follow the financials, but a butcher will steer good meat to you," says Goldwyn, who recommends at least USDA Choice beef. If you can get Prime, all the better.

I've taken to buying whole, untrimmed packer briskets from Costco, usually between 12 and 14 pounds. Often, I don't buy anything else and walk the quarter-mile to the checkout with the slab under my arm with an unwarranted sense of primal accomplishment. 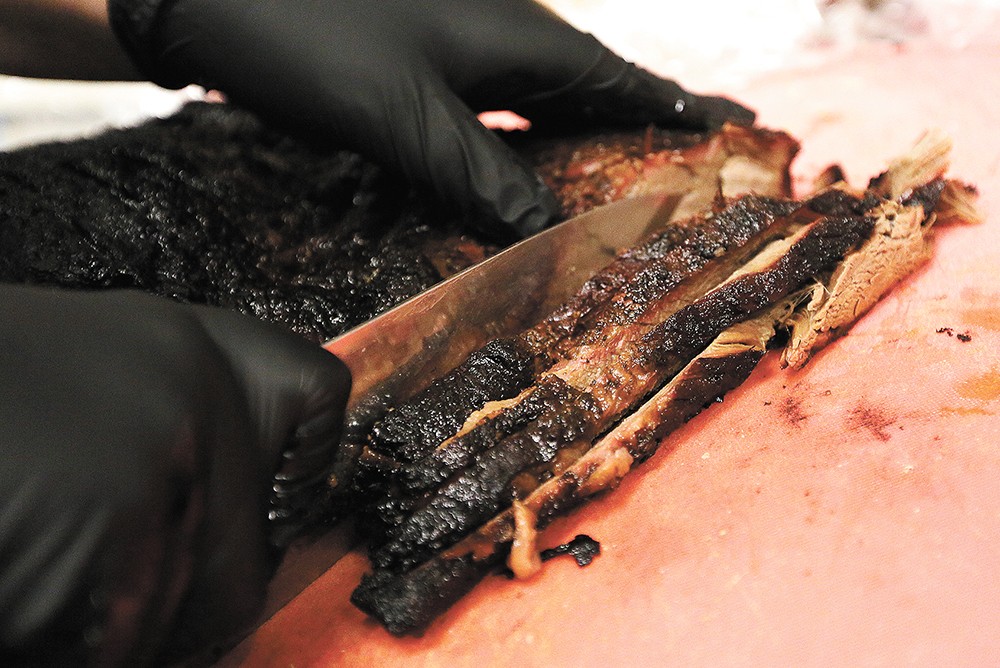 Young Kwak
JJ's Tap and Smokehouse offers some of the best brisket in town.

I talk about brisket more than I should,

and have bored the hell out of too many polite strangers in that Costco checkout line as a result. They don't care about my choice of hardwood, or that I inject my brisket with beef broth before it hits the grill. I can now empathize with marathon runners and, oddly, vegans, in the need to discuss one's hobby ad nauseam.

Thus, rapping about brisket with folks in Spokane who barbecue for a living was a relief. I sat down with Bob Hemphill of beloved Chicken-N-More in downtown Spokane, who makes one of the best briskets in the region. Yes, he's also been making insanely good fried chicken in Spokane for 25 years, but get the brisket sandwich, because Hemphill grew up in Texas eating brisket for breakfast. I ask him what makes a good brisket. He says "temperature," and details his process for knowing when to pull the meat, but there's more to it than that.

"You know what I tell a lot of guys, Mike? It's like marriage. It's trial and error," he says.

This is true. My first brisket was a dried-out hunk of leather that had to finish in the oven. Most people fail the first couple of times, which is maddening, and even Meathead's scripture won't save you if you don't learn the quirks of your own smoker.

You can find brisket elsewhere in the region, and I've eaten most of it. Longhorn, the big name in barbecue in Spokane, does a solid job. So does Dickey's, even if it's a chain. I've eaten it in a sandwich at Central Food and in a breakfast hash at Luna. When Texas True Barbecue opened this past winter in downtown Spokane, I bonded with owner Peter Grundhauser over brisket technique.

Eventually, I found myself out at JJ's Tap and Smokehouse on Indian Trail Road. It's a bit of a drive, but if you show up on Fridays, you can get a platter of kitchen manager Cory Pippenger's USDA Choice brisket. He's been in the business for 15 years, but learned how to smoke from his dad long before that. Pippenger's brisket is a labor of love in a lot of ways.

"I'm here 12 to 15 hours a day. I'm putting as much into this meat so that people can enjoy it as much as they possibly can," he says. "When the meat is perfect and you bite into it, it just melts."

I couldn't find the fire extinguisher (find yours immediately)

and the flames were getting higher. My daughter watched, more nonplussed than alarmed, as I dragged the hose from the front yard through the dining room. I hooked it up and turned on the water. Before spraying, though, I remembered something from Boy Scouts about grease fires and water, and didn't douse it.

The possibility of this brisket taking down our house became real. But as I went to call 911, the fire gradually ran out of grease, and thankfully the rain picked up. Our home was saved.

As for the brisket? It appeared to be lost. It was a charred lump, and the digital thermometer that had been monitoring the meat had burned up, too. But I wrapped it in foil and nursed it up to temperature (I believe that 197° Fahrenheit is the God Temperature). I trimmed off the charcoal. The neighbors loved it.

It wasn't my best. Not by a long shot. I haven't made the best one yet. My White Whale is still out there. Ask me about it sometime. I'll talk your ear off. ♦