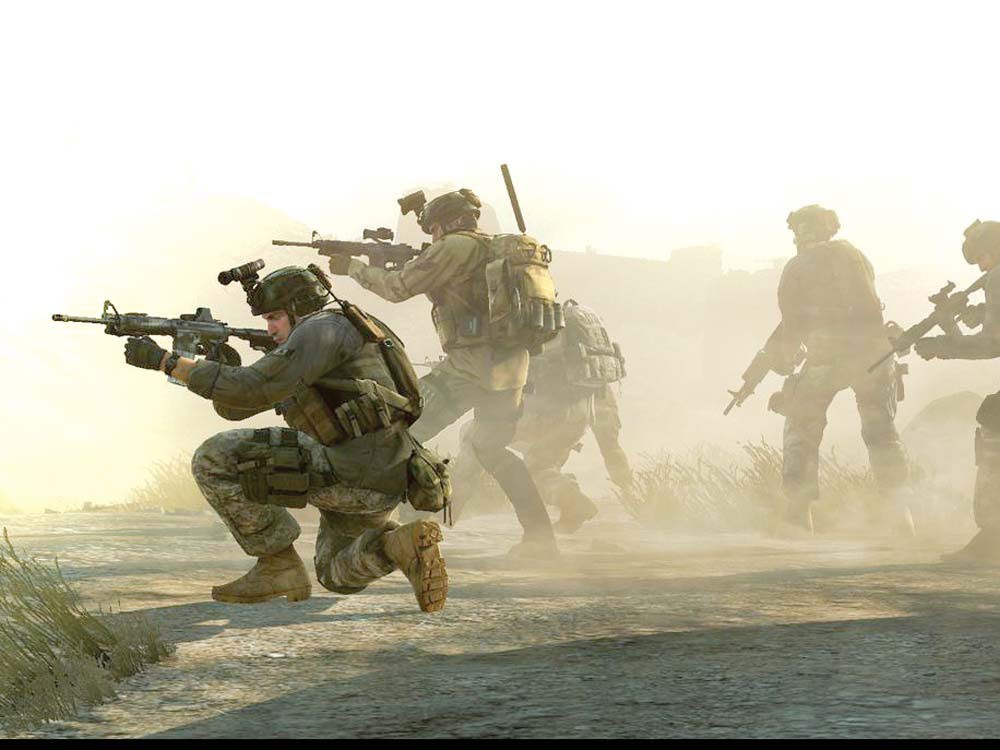 I've been dropped into so many war zones I no longer notice the details — the golden chains of bullets strung through the air, pings and pops from various calibers of guns, voices screaming in English and whatever non-English my opponents scream...

War, anymore, is the same everywhere. My boots hit the ground and my rifle scope finds my eye. Enemies are the ones who land on the other side of my sights. A tangle of economic, social, political and spiritual ideals, ballistic calculations and manufacturing virtuosity, a time, a place, a people, a race — are all erased by the simple pull of a trigger.

Or maybe that’s just Medal of Honor. I certainly gained some insight into the relationship between xenophobia and pre-emptive defense when I played the sci-fi Halo: Reach a few weeks ago. And last year’s Call of Duty: Modern Warfare 2 brought me into closer contact with the dark sacrifices that are required in the pursuit of evildoers.

Medal of Honor attempts to bring the real-world war in Afghanistan into the simulation chamber of a first-person shooter. Soldiers chatter about “A-Q.” The offensive, in which I assume the roles of various soldiers, penetrates ever deeper into a cave-riddled mountainous desert landscape. And resources, from ammunition to supportive airstrikes, are carefully rationed and occasionally hard to find.

But the most successful of the game’s single-player levels follow the standard shooter schedule of periodic clusters of enemies with ever-greater weapons. The less successful missions play out like a stroll through a shooting gallery. What should be a sprawling, paranoid mess of a conflict often feels like the theme park recreation of a battle zone — a one-track ride with all the thrills popping up in their predictable places.

On a cosmetic level, Medal of Honor has succeeded in its re-creation of Afghanistan. A fog of dust obscures everything. The desert erodes everyone down to the same appearance, with turbans, beards and sand-covered colors. Every living thing looks like a rock until it moves. But strip the setting away, and this is just war X on battleground Y. My only choices are to fight my way from A to B.

THE GOOD: Occasional set pieces deliver doses of immersive spectacle. An airstrike seen from up close turns the world orange and leaves me walking through the hollow, glowing haze of a sunset. A raid on an Al-Qaeda mountain camp finds me scrutinizing hillsides through my crosshairs, tracing smoking RPG trails to their sources while I dodge my way from boulder to boulder. But these episodes play themselves out identically each time through the missions, making them feel like cinematic moments more than interactive achievements.

THE BAD: Enemies repeatedly pop their heads up from the same position each time they want to take a shot. When I turn out the lights in a building, the occupying soldiers stand at their posts, peering into the black as though nothing had gone wrong. And my fellow soldiers find the stones and shrubbery of Afghanistan more perilous to navigate than a minefield, getting stuck in the scenery on the way to the war.

THE BOTTOM LINE: Medal of Honor doesn’t necessarily deserve one.