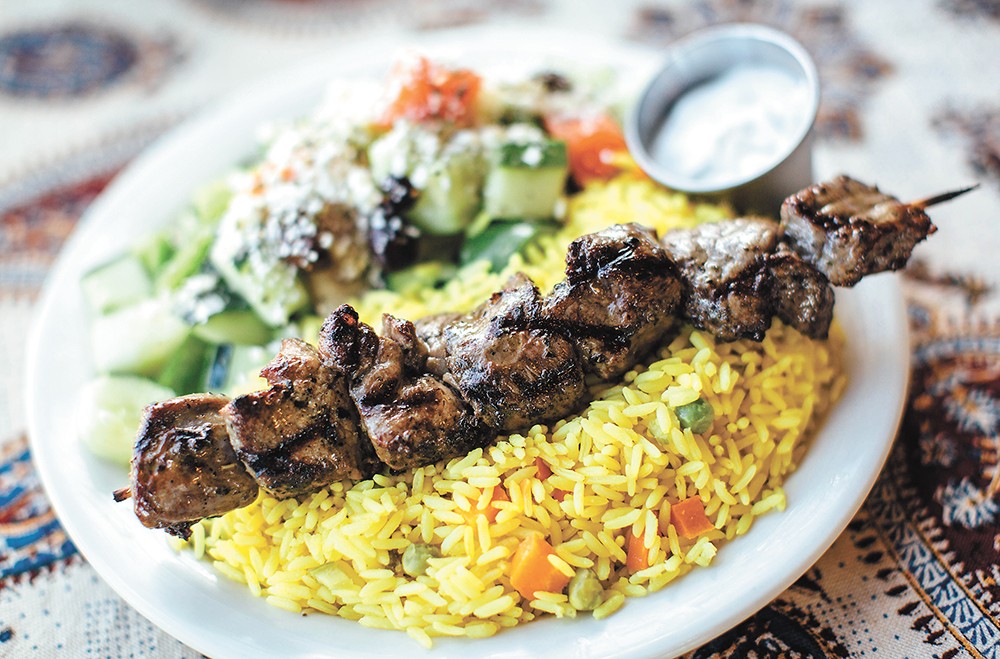 Jennifer DeBarros
Marinated beef with rice and Greek salad at the Kabob House.

"Big" is the name of the game

at the new Kabob House Mediterranean Grill in Spokane.

It's true with the food, as sandwiches arrive with generously overstuffed pitas and dinner plates full of delicious Greek rice and salad underneath the entrées. And it's true with owner Ahmed Baqer, who says the opening of the third Kabob House, and first in Spokane, is the start of some serious expansion, including franchising more Kabob House outlets in Spokane and throughout the Inland Northwest.

"We plan to grow," Baqer says.

The 34-year-old Bahrain native opened the first Kabob House in a 600-square-foot space in Yakima in 2009, and was successful enough to have to move twice to accommodate the local fans of his falafel and shish kabob. The Yakima restaurant is now in a 2,100-square-foot spot, and Baqer opened a second location in Ellensburg last fall.

Spokane's population made it a natural next stop, he says, and in September, Kabob House opened in the former Ruby Street home of Williams Seafood. The physical transformation is dramatic, with a large dining room of about two dozen tables taking the place of grocery racks and fish coolers. A long, open kitchen lines one side while artwork from the Middle East dots the walls.

"We worked very hard to make it beautiful," Baqer says, noting that it took two months to get the space ready. If you go to many Mediterranean spots on the westside, he says, "it's not going to be this nice."

It definitely won't be as good a deal. Baqer takes pride in delivering a "quality product at a reasonable price, healthy, grilled, lots of vegetables," and that's what I found on a recent visit. The gyro sandwich ($9) was tender and flavorful, tzatziki sauce a perfect complement. Delivered with herb-seasoned fries, it proved a meal in itself. Likewise, the chicken shawarma dinner ($10) was tender and the marinade delicious. The accompanying Greek salad was full of hearty cucumbers, green peppers, tomatoes and plenty of feta cheese, and the mound of Greek rice was too big — if that's possible.

The highlight of the meal might have been the babaganoush ($4.85). I've had various versions of the eggplant dish that have been puréed into a hummus-like spread. At Kabob House, it was chunkier, and it was delicious. ♦