Getting to know some of the people at our area markets 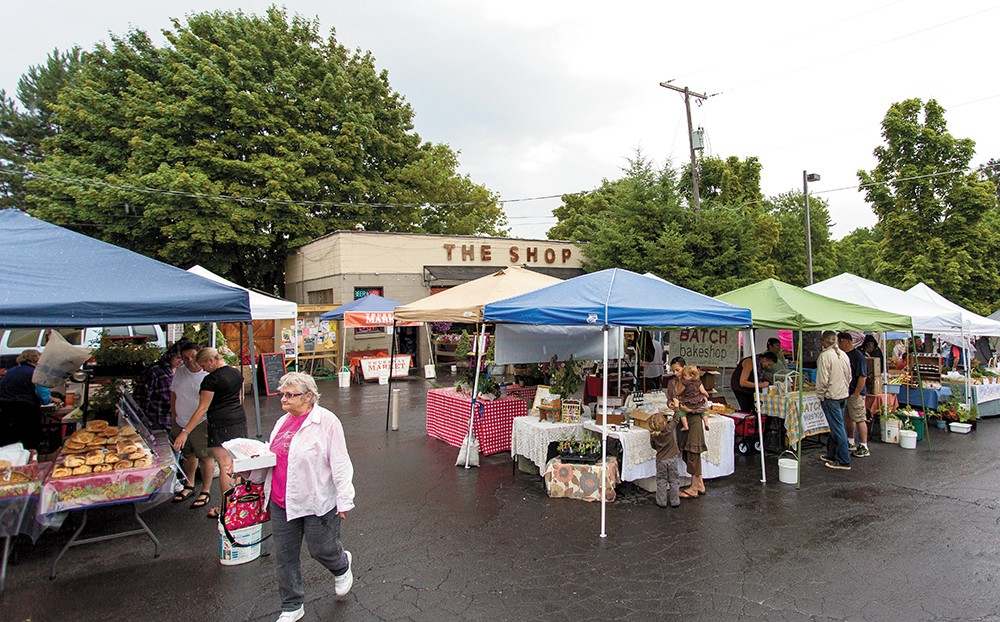 "We are one of the few local farms that has it all," says James Rowley, farmer and owner of Spring Water Farm.

Rowley isn't exaggerating. At Rowley's booth, one finds large ice chests filled with pre-packaged cuts from grass-fed beef and pork and free-range chicken. Cage-free eggs are available year-round, while turkeys are slaughtered for purchase near Thanksgiving. Rowley's farm also grows a wide variety of fruit and vegetables that begin trickling in to market beginning in late June and early July, rounding out the farm's bounty.

Rowley, a former house builder who grew up on a small farm, began considering farming as a full-time livelihood after the economic downturn and housing crisis of the late aughts. By 2007, Rowley was working with the Spokane Farmers' Market to sell his provisions.

Located in Deer Park by Horseshoe Lake, Spring Water Farm is a family affair. Rowley and his wife vend at farmers markets in the summer and do off-the-farm and direct farm sales year-round.

"We come down every other weekend in the winter for a few hours for those on our mailing list. We open up the back of the truck and let you shop," says Rowley.

Spring Water Farms also participates in Community Supported Agriculture (CSA), offering weekly boxes of seasonal produce to members. Whole sides of beef and pork also are available for purchase, and a Spring Water Farm cookbook is in the works.

Rowley's love for both farm and farmers market is obvious.

"I just love having my hands in the soil, period. Winter is long for me. And I like the animals," says Rowley.

His favorite part of being a vendor?

"Connecting people with good food," says Rowley. "It's amazing when people come back and are so happy they've learned something."

"We started a lot of the trends. We'd show up at the market with something years ago and now everyone has them," says Bereiter.

Bereiter's booth, Martha's Garden, offers a variety of local favorites that can currently be found on some of the most inspired menus in the Pacific Northwest. Heaps of stinging nettles balance among homegrown garlic and garlic scapes. Chives fight for space with fiddleheads from indigenous ferns. Depending on the week — and the rainfall — rich coral mushrooms and delicate oyster mushrooms are portioned out next to thick slabs of pungent porcini. Dried morels are plentiful, bagged to tide shoppers over until fresh morels are available.

"We do a spring and autumn mushrooming. If it rains all summer we have a better mushroom season," says Bereiter.

Bereiter, who has been foraging for mushrooms, greens and berries since he was a child, utilizes his walks in the woods to keep in shape and search for ever-elusive mushrooms.

"One thing I love about mushrooms is that there are always surprises. They are continually changing. If you are trying to get a hold on them, you won't. Our porcini is a mystery to most people," says Bereiter. "Porcinis fight the summer sun here. They only last a couple of days. I got lucky 20 years ago and found some."

Martha's Garden also offers a vast array of jams and jellies, including huckleberry and elderberry, made from scratch by Bereiter's wife Martha.

"We grow or collect wild berries. For this reason we don't have hot pepper or pineapple jams," he says.

Bereiter's enthusiasm is contagious, and his knowledge of our abundant native flora and fungi will surely motivate marketgoers to try something new.

The arrival of berries at farmers markets is a telltale sign that summer has officially arrived. Thanks to Aichele Farms, a family-owned and -operated farm in Hermiston, Oregon, luscious berries, warm from the heat, beckon to enthusiastic marketgoers in mid-June.

Aichele Farms, founded seven years ago, has been coming to Spokane for four years. The boom in the popularity of farmers markets and the support from the local and regional community has not gone unnoticed by the Aichele family.

"We have stands in Spokane, Pasco, Portland, all over," says Young Rae Aichele.

Terryl Aichele is just as fond of the farmers market community as they are of her.

"I just love meeting the people. You get people who come to you week after week," says Aichele.

The method for purchasing the berries is simple: all berries are priced by the cup, allowing shoppers to mix and match as they like from an ever-changing selection. Choosing which berries to buy, however, is not so easy. Black cap raspberries, which contain three times as many antioxidants as blueberries, beg to be made into jelly or pulverized into wholesome smoothies. Tayberries, with their delicate lemon perfume, are a sure thing for jam.

Because Aichele Farms never uses pesticides or fungicides, there's no need to worry if your only plan is to snack on your berry bounty as you wander through the market. And with a variety of berries that change week to week and everbearing strawberries that last through the summer, you can always make jam next week. ♦