Melissa McCarthy's charming, but the unfunny Life of the Party simply has no story to tell 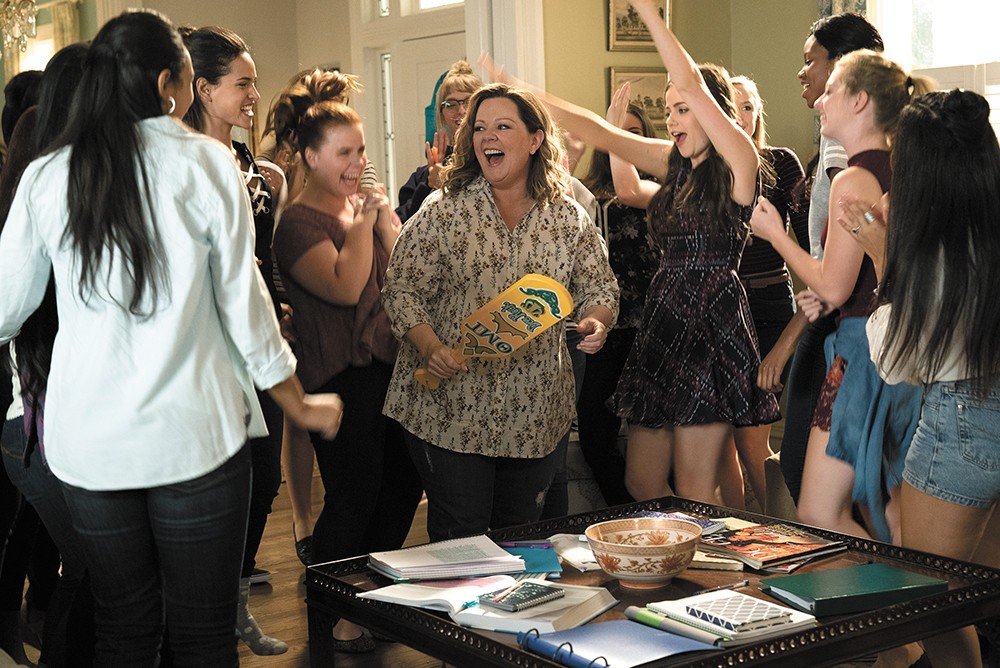 Fact: Melissa McCarthy is a comic treasure. So why does she keep writing and starring in lame comedies like Life of the Party?

When her husband, Dan

(Matt Walsh), tells Deanna (Melissa McCarthy) that he wants a divorce, she's blindsided. But she quickly — unrealistically quickly — bounces back and decides that the time is right for her to finally go back to university and finish her archeology degree. She had dropped out when she got pregnant with her daughter, Maddie (Molly Gordon), and hey, why not go right back to the very school where Maddie is now a senior herself?

As Deanna might say: Gosh! It all goes great, thanks for asking! Of course she chooses to live on campus at fictional Decatur University, and though her new roommate may be a creepy, asocial goth (the utter opposite of bouncy Deanna and her overly bright and sparkly mom sweatshirts), they're instantly fast friends. Maddie's minor, gentle reservations about having her mother around all the time are soon forgotten, and all of Maddie's adorably quirky, mega-nice friends simply love Deanna.

She even immediately snags a hunky boyfriend in gorgeous, sweet Jack (Luke Benward), the only guy in the frat house who prefers chardonnay to beer and shots; Jack is completely smitten with Deanna. She's awesome and funny and adventurous and happy and cute, and if she's having any trouble with the coursework after 20 years away, you'd never know it. Wow, life is simply grand, ain't it?

So Life of the Party is not a story. There's no conflict here. None. Oh, there's a mean girl who doesn't like Deanna because she's "like a thousand years old," but she is so quickly and easily dispatched that she barely registers, even during the '80s party dance-off that (I think) is meant to be a high point of the movie.

There's a scene in which Deanna, who hates public speaking, has to give an oral presentation to her archeology class, and she's so nervous that she sweats profusely... but that's not drama It's an embarrassingly bad, painfully unfunny, cringeworthy attempt at physical comedy — which is true every time the movie tries to pull off junk like this — but it's not story. It barely even qualifies as a challenge for Deanna to overcome.

This is yet another pairing of director Ben Falcone with McCarthy, and as with their previous outings in The Boss and Tammy, they've written the script together. They're also married to each other. Maybe this all made sense as a sort of private joke between them, but it doesn't work for us. Sorry, but crotch-injury jokes illuminate nothing about a woman's midlife crisis... or they wouldn't, anyway, if Deanna wasn't absolutely sailing through hers. No, not even when the crotch injuries are happening to ladies. Other attempts at humor are dragged out like roadkill until whatever bit of life they might have had — which is extremely minimal — has long since been extinguished.

The "jokes" here are excruciating enough. Having them explained to us is unendurable.

Life of the Party is not an ironic title: Deanna literally ends up as the authentically celebrated life of the party at Decatur U. And yes, absolutely, we need movies about women — particularly women of a certain age — enjoying life and doing things for themselves and being unabashedly worshipped by much younger men. Thank goodness the movie doesn't attempt to render it "funny" that Jack finds Deanna irresistibly sexy.

But those things still have to happen in the context of a well-told tale. Hollywood hadn't been around long before some wag or other suggested that if you want to send a message, call Western Union. McCarthy is as endearing as Deanna ultimately is, and she deserves much better than delivering a bland telegram to us. ♦

Life of the Party is not showing in any theaters in the area.