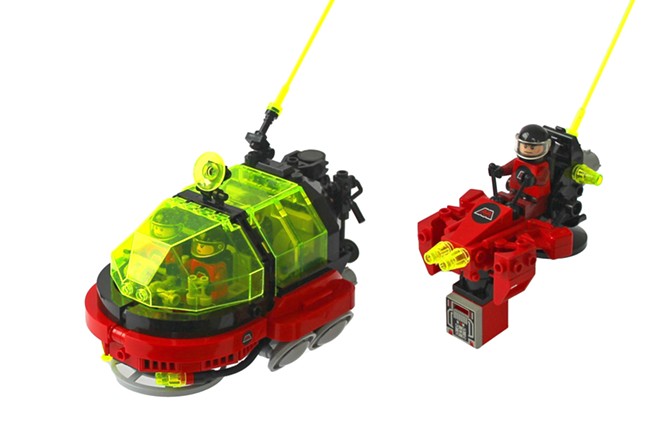 Legos meet the power of magnets in the M-Tron series.

Even before it was unwrapped, the present built its own hype. Some boxes would feel soft, (A dress shirt from Lamonts, I'd think, as my heart would sink) or solid but pliable. (A paperback book, of course, but which book? There are several out there.)

But this box, with the slightest bit of shake, you could hear an iconic rattle.

LEGOS! It was unmistakable. I can fondly remember sitting on my Grandma's couch one Christmas Eve — I was probably about 6 years old — excitedly unwrapping the "Forestmen's Crossing" Lego set.

I spent hours methodically piecing together the Robin Hood-inspired set, following the instructions without wavering. For a kid with a hyperactive imagination, it was soothing. Brick clicks into brick. It just works. It's the same sort of meditative satisfaction I would find cooking years later. And by the end of it, I had not one, but two treehouse fortresses — connected by a rope bridge spanning a Lego river — to show for it.

And soon, I learned, over future Christmases, that there were even cooler Legos out there. There were space Legos, with space men wearing space helmets and space cars and even, as The Lego Movie would later accurately document, spaceships. But once you were done with building the set, you'd dump them all in the big space-Lego bin, and then combine them. You think your spaceship looked cool with two lasers? Well, buddy, mine has six lasers, and a swivelly satellite dish, and a medieval rope bridge so what do you think about that?

Lego officially reached its zenith with the "M-Tron" space-Lego series. Each of the M-Tron Legos came with a real live Lego magnet piece, for better connecting spaceship parts They just let kids have powerful toys like these without a permit. My science teacher dad explained that magnets were a key part of the second strongest force in the universe, stronger even than gravity. And I believed it. I could stick it to the fridge. Pick up paper clips. Stick it to my computer monitor and make the monitor do super weird things.

Nearly three decades later, I went Christmas shopping for my niece. And so Christmas afternoon, I sat next to my little niece as she, peering through her glasses, began snapping together a Frozen 2 "Enchanted Treehouse" set.

The color scheme was different — green and black were out, pink pastels were in — but it was not so different from "Forestmen's Crossing." Legos, when snapped together, were powerful enough to link entire generations.

And that, I figure, makes them the first strongest force in the universe. ♦