Menopause the Musical comes to the Bing with Spokane native Cherie Price in the cast, and lots of laughs in the script 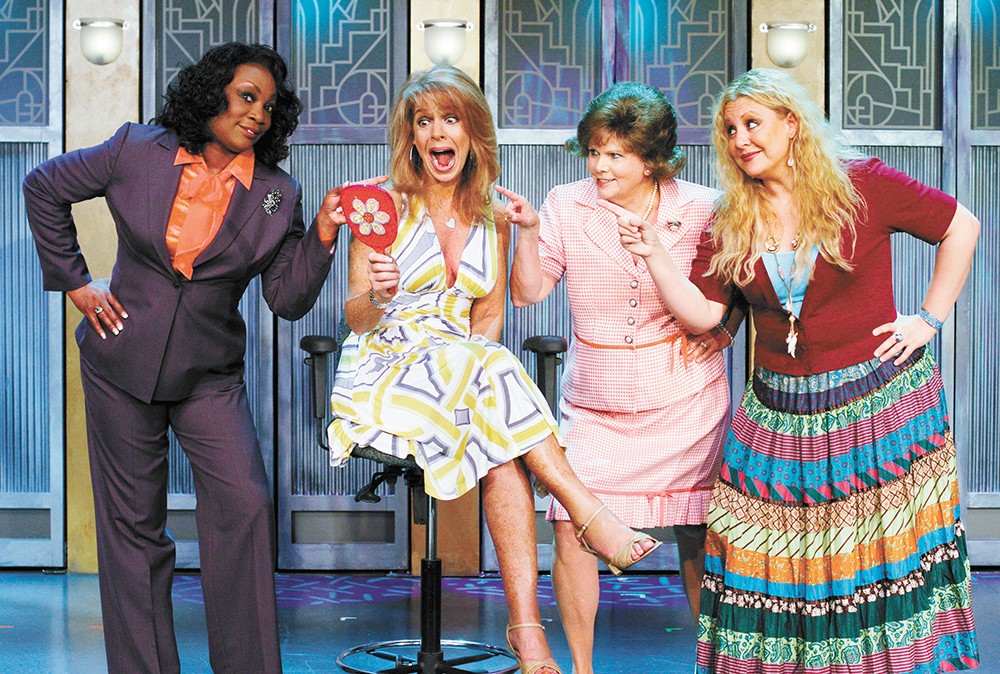 This one is all about the ladies — the ladies experiencing the dreaded "change."

The 90-minute Menopause the Musical tells the story of four nameless women who meet at a lingerie sale and have seemingly nothing in common — except a black lace bra and the slew of effects that accompany menopause.

They talk and joke about hot flashes, memory loss and weight gain, all the while celebrating their new bodies, and bonding with each other and the women in the audience. With only four actresses and no intermission, the show is a nonstop ride of music, laughs and sisterhood.

Cherie Price hails from Spokane and has been playing the role of "Soap Opera Star" for over a decade, after getting her start in Portland in 2006.

"I am thrilled to still be doing it," Price says. "The show is hilarious. The name doesn't really give that away, but it is hilarious. Most women wouldn't say going through menopause is hilarious at all, but this show makes the conversation a little more fun."

The show, which has been touring for 18 years, is also the longest-running scripted musical in Las Vegas. Price credits the show's success to its "brilliant writing."

The musical features parodies of famous songs of the '60s, '70s and '80s whose lyrics have been changed to poke fun at menopause. Brenda Lee's "I'm Sorry" has become "I'm Flashing," Mary Wells' "My Guy" has transformed into "My Thighs," and the Tokens' "The Lion Sleeps Tonight" is "My Husband Sleeps Tonight."

It may be full of humor and catchy tunes, but Price says the underlying message is really empowerment and female unity.

"A lot of women haven't talked to other women or discussed [menopause] with other women, even though we're all dealing with it," she says. "So when they can come to the show and relate to it, and laugh about it and have fun with it, it's really great."

After 13 years on the road touring with this show, Price is looking forward to visiting the Lilac City.

"I'm so excited to return to Spokane, and especially to perform at the Bing, where I've never performed," she says.

Price is looking forward to doing the show in front of her family and high school friends who still live in the area. Price's acting journey didn't begin until she moved away from Spokane. She attended the now-closed Holy Names Academy and was a cheerleader for Gonzaga Prep. She always knew she loved performing, but didn't have an outlet for it until she moved to Colorado for college.

Menopause the Musical is not Price's Inland Northwest debut; she returned home and performed in several shows at the Spokane Civic Theatre and Coeur d'Alene Summer Theatre, including Anything Goes and Singin' in the Rain, throughout the early 2000s.

Although she's been touring with Menopause the Musical for 13 years, Price says she has fun with every performance and works on staying in the moment on the stage.

"Every audience is new. My expectation of myself is to go in like I did my very first time," she says. "It's their first time, so it'll be like my first time."

Price says she's looking forward to her hometown getting to meet her relatable "Soap Star," who she identifies with so much.

"She's an aging soap opera star, and she's desperate because she's afraid of getting replaced with the new young actress," Price says. "So she's desperate to stay young and is always worried about how she looks and 'does she look too old?' And I think there are a lot of women who relate to that and feel that way. So they come to the show and they're already wondering how do they deal with that, and hopefully my character's journey kind of helps them."

At the end of the day, Price says, the show is about women coming together to celebrate each other in a way that is lighthearted.

When they couldn't find the perfect wine bar, a Spokane couple created their own inside River Park Square