A local singer-songwriter favorite reemerges. Plus, a new north-side venue and an Alaskan troubadour. 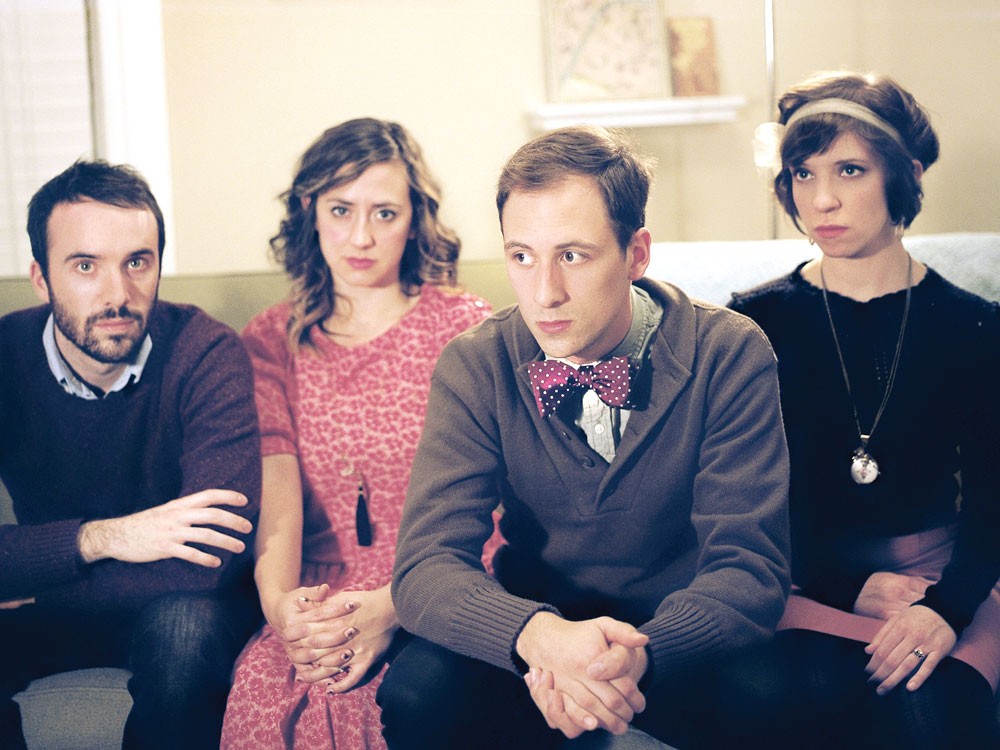 Melani Brown
Cathedral Pearls is (from left) Caleb and Karli Ingersoll, and Max and Carrie Harnishfeger

Nearly a year ago, when Empyrean Coffee House finally closed in downtown Spokane, the acts that helped build its reputation as an essential all-ages music venue came out of the woodwork to perform at a few big finale shows.

One of those acts was singer-songwriter Karli Fairbanks, an Empyrean favorite who became known for her country-inspired folk tunes. But her set was different this time than all the other times she played there.

She took the stage as Karli Ingersoll. The newly married singer was accompanied by her husband, Caleb, on drums. They called themselves Cathedral Pearls.

Soon after that performance, the two were joined by Max Harnishfeger (formerly of Spokane’s Ruby Parasols) on bass and vocals, and his wife, Carrie, on keyboards. And what started to come out was something very different from the wheat-field folk that Spokane fans were used to hearing Karli — the Fairbanks version — sing onstage.

“As a solo artist, I was growing tired of only doing what I could do,” she tells The Inlander in an email. “I wanted to be a part of a community that all played different parts in the greater whole. … My priorities have shifted from trying to get stuff done on my own to just hanging out together and being more relationally focused. It’s been kind of a strange transition for me, because the pace is much different, but I love it.”

As a quartet, Cathedral Pearls released a self-titled EP last month. The three tracks are high-energy, melodic and occasionally electronic. “Songbird’s Tune” highlights just how many things this band can do well, swelling guitars interplaying with blastbeat drums and tiny, poking electronic blips. The band sandwiches a cover of the Walkmen’s “While I Shoveled the Snow” with “Tin Can Phone,” a staggering jam that highlights Max’s vocals and shows the bands focus on simplicity.

“I think we have all been listening to a lot more electronically driven music, stylistically,” Max says. “I could see us using more of those types of sounds; not that we will become a dance rock band, but more that we would use those types of elements to introduce new, interesting textures to our sound.”

“We each have somewhat different music tastes,” Karli says, “but I think we all agree on the musical direction we want to go in.” (Leah Sottile)

“The best thing that ever happened to me was closing Stage 54,” says entrepreneur Jayme Cozzetto, who owned the bar and music venue on Spokane’s north side for five months. “That space inherited old reputations from what it used to be and, honestly, I got to the point where I didn’t want to own a night club anymore. I wanted a convention center.”

And now he has it. Cozzetto recently opened the Spokane EpiCenter, a gigantic slab of concrete in the middle of the north side that has room for 500 concert-goers.

depending on the event. So far, the venue has hosted everything from MMA fights to cancer fundraisers to a zombie apocalypse party called “28 Ravers Later.”

The two-tiered building, transformed from the old Moose Lodge, features a square wooden dance floor or pit, glass doors, a balcony and mirrored walls. That’s right — gigantic mirrored walls, so your sweet-ass moves and tribal dancing with glow sticks can be seen in doubles from across the room.

The dubstep gurus from HeadyWorks productions attracted hundreds of fans to line up outside the door in October for their Haunted Heads Halloween Party. Perfechter Productions has also booked underground hip-hop artists like Illmaculate, G-Force, Mike Vegaz and the Gruesome Gorilla Pack.

Cozzetto says he’s saving money on overhead costs. He’s happy to be out of the nightlife business and into the business of providing a space for fundraisers. Despite the venue’s location, he says the north side is growing and ready for a place like the Spokane EpiCenter.

“We’re a mid-sized, affordable venue for only $100 an hour, plus extras for things like sound and lighting,” Cozzetto says. “We’re really a niche market that’s missing in Spokane.” (Jordy Byrd)

Alaska breeds isolation and oddity. Singer-songwriter Matt Hopper understands this well from his early days as a Last Frontier troubadour. One night Hopper might’ve played a rec center; the next night he would be onstage at some fisherman bar with a bartender named Future.

“There aren’t a lot of traditional music venues with a sound guy and a green room and all that stuff,” says Hopper. “It’s like, ‘Cool, here’s a bar in Talkeetna that you can play for $300, but you’ve gotta play for four hours. And all the locals are gonna come check you out. And if it’s not bluegrass, they’re just gonna keep drinking and ignore you in the corner.’” Hopper has been rambling around the country since starting his music career eight years ago in Anchorage. He’s lived in a spectrum of cities — from Los Angeles to Madison, Wis. — but currently calls Boise home.

Likely due to his tendency to relocate, Hopper’s backing band, the Roman Candles, has an absurdly high turnover rate. In fact, the band is more of a loose concept than a band, as multiple incarnations can exist at any given time.

“I’ve got a band in Alaska and a band in Boise,” he says. “And at one point I had a band in Austin, Texas. And Nashville. I know a bunch of guys in New York that will back me up.”

“That’s kinda how I roll, because I’m a songwriter. I’m not necessarily tied down by the fact that I need three other dudes or women to make my sound happen.”

Hopper has also employed other bands to back him, including Anatomy of a Ghost (the band that begot Portugal. The Man) and Cold War Kids, whom Hopper actually took on their first tour before they broke big.

While it’s somewhat frustrating to be constantly shuffling parts, Hopper delights in the oddly fortuitous foreshadowing of naming his band.

“I named the band the Roman Candles years and years and years ago, based on a Jack Kerouac quote I like from On the Road. And the band has proven to be exactly like a roman candle,” he says. “Fireworks basically shooting out big blasts, like 10 in a row, ‘BOOM! BOOM! BOOM!’ They get their little chance to shine and then they blow up. And then it’s the next one.” (Seth Sommerfeld)