MiFlavour’s team has been perfecting its new frozen dessert line for the past six months, Piskun says, after purchasing all the recipes and equipment from the recently shuttered Brain Freeze Creamery. Fans of the defunct creamery’s banana pudding and chocolate dirt ice cream can now find the two flavors in the Volonti gelato lineup. 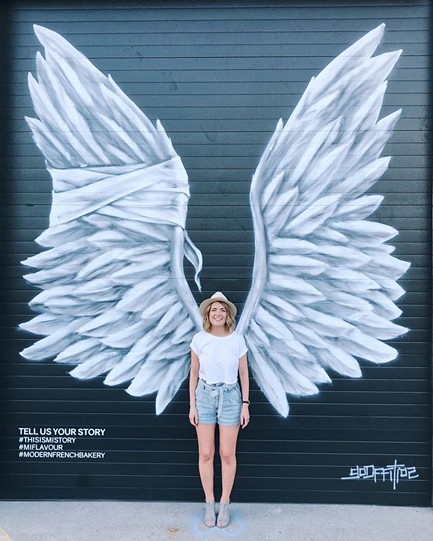 MiFlavour
MiFlavour co-owner Ella Piskun stands in front of the bakery's new mural by artist Daniel Lopez.
A grand opening to celebrate Volonti’s launch is in the works, but in the meantime, its gelato, sorbetto and macaron ice cream sandwiches are available to purchase at the bakery and cafe. Customers can also order through the bakery’s new ordering app for Android and iOS.

The bakery also recently unveiled a new mural of angel wings on the side of its building, painted by Spokane muralist Daniel Lopez. The Piskuns and Lopez each shared some personal stories in connection with the project on MiFlavour’s Instagram, @miflavour.