City Council Candidate Mike Lish was the last to give us a recipe, beat by his rival Zack Zappone by just a few hours.

I'd asked all four city council candidates in competitive races — Zack Zappone, Mike Lish, Naghmana Sherazi, and Jonathan Bingle — to share a favorite recipe with us. My promise was that I'd try my best to cook it and tell you what I think. 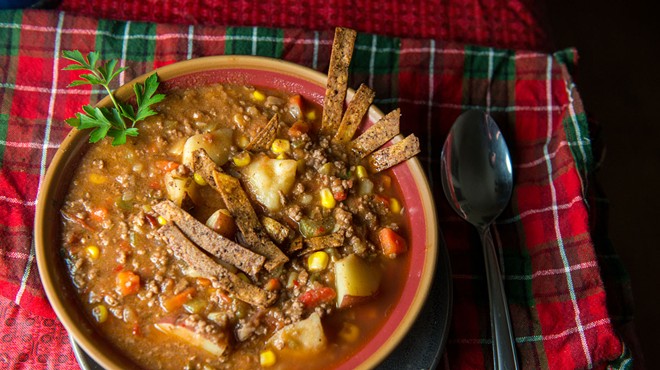 You might think, because he's the president of a beloved fast-casual burger joint "D. Lish's," that picking a recipe would be simple.

But imagine the pressure he was under: It wasn't just his political reputation at risk, he had an entire culinary empire to think of.

Does he go all Top Chef fancy, summoning every creative flourish in his arsenal to meld together a fusion of the past and present, something that speaks to generations of tradition, but infused with a kind of cosmopolitan sophistication?

Or does he do, like, some kind of hamburger thing?

Or, why not bøf? "Hakke Bøf" to be specific. And why not throw in a bit of Agurkesalat for good measure?

"These recipes are family favorites and come from my heritage,"  Lish writes. "My mother's father was born in Denmark and immigrated to the U.S. right after WW2. He served as a Merchant Marine during the war and had dreamed of gaining U.S. Citizenship."


Hakke Bof is Danish for ground beef steak with onions, and includes a rich brown gravy made from butter and beef fat.  As for the Agurkesalat? That's a pickled cucumber salad.

Daniel Walters photo
Agurkesalat. But you knew that. 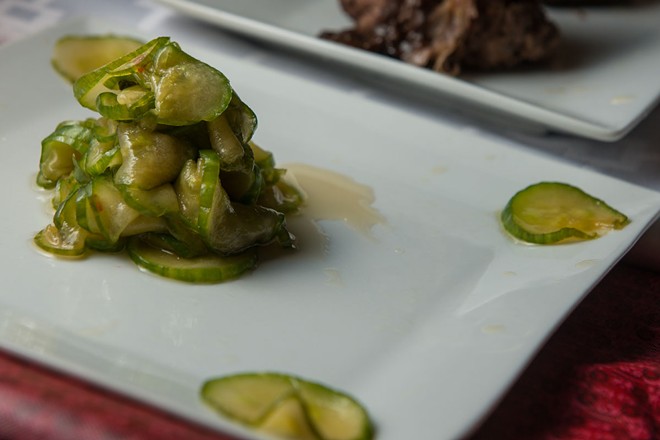 
RECIPE
1. Mix vinegar, sugar, and peppercorns
2. Heat until sugar dissolves while stirring constantly
3. Place mixture in a bowl and cool in fridge
4. Slice cucumber as thin as possible (Very sharp knife, mandolin or a food processor with a slicing blade will work)
5. Mix slices with salt and refrigerate for 1 hour
6. Squeeze excess moisture out of slices by hand, place drained slices in vinegar/sugar mixture
7. Marinate for at least a couple hours, can be kept for over a week before eating. (Great with roasted pork, roast chicken, smorrebrod — open-face Danish sandwiches — and beef dishes)

Daniel Walters photo
Hakke Bof, there it is.

WHAT I SCREWED UP A LITTLE BIT

- Almost nothing. I couldn't decide between lean beef and buffalo, so I decided to go with beefalo, which I envisioned as some sort of strange chimera of cow and bison, cobbled together in a dark lab by outlaw scientists in defiance of the church. It turns out it's just beef and buffalo meat mixed together.

- I was panicked that substituting brown sugar for white sugar would discolor the cucumber an ugly brown, but the ultimate shade was quite pleasing

- Even the flour, my old cooking nemesis, cooperated for once. No clumps, no fires, I didn't rue the day I made a roux that day.

- Biking home in Browne's Addition the next day, a pet dog on a walk suddenly leapt at me, latching onto my leg, ruining a decent pair of jeans and marring an even better pair of calves.  My theory? I had eaten so much tasty beef the night before that oniony beef scent was oozing out of my pores and the poor creature couldn't keep his jaws to himself. He just had to taste it.


HOW TO MAKE IT EVEN FANCIER
Just spitballing here, but what if you placed the bof between two circular pads of bread? What if you rebranded the gravy as "special sauce?" What if you took a thicker cut of the cucumber salad, pickled it in dill, and placed it on top of the meat and onions? What if you handed out a small free children's toy along with every serving?


Call it a "Lykkeligt Meal."