What's on your mind? Neurofeedback can show you - and even help you alter the way your brain works 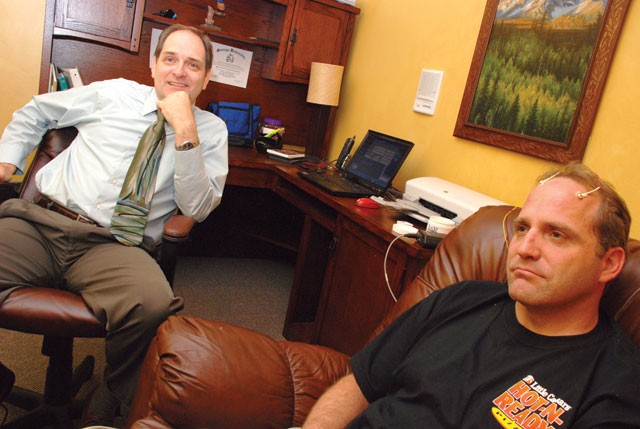 With electrodes dangling from each earlobe and one atop my shiny, bald scalp, I stare at a computer monitor trying to make my blue rocket ship fly through space. No joystick, no keyboard — I’m like Luke Skywalker, using the Force. Actually, I’m not doing much of anything — not consciously. But as I focus on the steady beeping and the raspy hum of the spacecraft’s engine, my brain is learning to produce more of a certain frequency brainwave activity. Ten beeps and my ship picks up a jewel in space! But if my mind wanders or I talk to the psychologist, the yellow and purple rockets want to fly, too. I don’t want that because they are fueled by different brain frequencies — bands of activity that are often associated with daydreaming or anxiety. Gotta keep the blue ship out front. Beep, beep, beep. I simply focus. Pay attention. It roars forward again.

Sitting at another desk to my right, Roberta Trescot of Neuroeducation is looking at another computer screen — one that displays my brainwave activity broken out into different bands. She’s like Air Traffic Control, making sense of all the squiggly lines and shifting numbers. She’s giving me a demonstration of neurofeedback — a simple therapy based on complex science. More and more, it’s being used as a first-line treatment to help people with ADHD, seizures, autism, depression, anxiety and a number of other neurological and psychological issues.

“A lot of people who have difficulty with attention might have too many delta waves or too many theta waves,” Trescot says.

“Those would be the daydreamers — the spacey kid in class who doesn’t pay attention very well.” When the kid is hooked up to this computer — an ordinary PC running advanced, proprietary software — the simple, colorful games allow his brain to teach itself how to operate in a frequency range that is more conducive to focused relaxation. “We’re retraining the brain to be active in a different way,” Trescot says. “Over time, their brain will continue to do that even when they’re not here.”

Research into the benefits of neurofeedback for humans began with an accidental discovery made with cats in the late 1960s. Just to see if it could be done, a researcher trained a group of cats to produce more of a particular brainwave frequency by rewarding them with broth and milk. It worked. Those same cats wound up in a subsequent, unrelated experiment at NASA involving neurotoxins and seizures. A certain group of cats did not develop seizures when exposed to the toxin while all the others did. When the researchers backtracked to find out why, they realized that this subset of animals were the ones previously trained to alter the baseline operating frequency of their brains. Researchers then turned to human subjects and discovered that epileptic seizures could be markedly reduced by using neurofeedback to teach patients to regulate their brainwave activity.

Dr. Myron Thurber of Neurotherapy Northwest says that telling a kid with ADHD to calm down, “is a lot like asking a child to speak Russian: ‘Today we are speaking Russian. Everybody knows how to speak Russian — it’s perfectly normal and natural. So, speak Russian.’ Or in the case of someone with ADHD: ‘Focus. Pay attention.’”

Some kids just don’t know how because they don’t know what “calm” feels like. The video game, combined with some guidance from the counselor, helps them to achieve that state and learn to maintain it on their own. Thurber says that neurofeedback has proven useful in helping patients with anxiety and depression, sometimes achieving in months what would otherwise take years to accomplish. He says it also helps people with autism to connect with their emotions, sometimes with dramatic rapidity. There is also some research to indicate that neurofeedback can actually raise the IQ of children with certain degrees of mental retardation. It’s still a relatively young field, Thurber says, in which standards of training and methodology require further development.

“When we first started, it was difficult to keep [Skyler] in his seat,” says Tina Petty, mother of the 11-year-old boy who has ADHD. She opted for neurofeedback after bad experiences with the side effects of the medications taken by his older sister for the same condition. “For him, being a child, playing a game on a computer is great — that was the real hook.

To find out more, visit www.aapb.org, the Website of Applied Psychobiology and Biofeedback. Or read Symphony in the Brain by Jim Robbins.

A blend of brainwaves of various frequencies occurs at any given time in the brain. The key is finding an appropriate balance for the desired activity.

Delta waves (below 4 Hz) are associated with sleep.

Alpha waves (8-13 Hz) are associated with a relaxed, calm state