The Inland Northwest is home to a sizable and highly competitive community of Magic: The Gathering players

From a combination of nervousness,

too little sleep and perhaps too much caffeine, Josh Mound's right hand trembles as he draws the top card off his deck. Across from him, leaning forward on his elbows, fingers pressed to temples, Mound's opponent bounces his leg restlessly.

It's down to the game's final moments. Mound has four life points left; his opponent, Bryan Eleyet, hangs on with one. Eleyet slaps down a card — Stormbreath Dragon, a 4/4 flyer with haste — but Mound instantly destroys it with a spell. It's still Eleyet's turn. Poker-faced, he plays a second card, Stoke the Flames. It deals four damage to Mound to seal the win.

The victory for Eleyet comes more than 11 hours into the tournament, an all-day Magic: The Gathering Pro Tour Qualifier hosted at the downtown Spokane comic and games shop Merlyn's. For coming out ahead of the 77 other players there, Eleyet nabs a plane ticket to Belgium in April for a two-day, invitation-only competition in Brussels offering $250,000 in cash payouts to top finishers. It'll be the 28-year-old's 10th appearance at a Pro Tour event, which is considered the highest competitive setting for players of the popular collectible card game Magic: The Gathering.

Often thought of as a hobby beloved only by social outcasts and introverts, it's estimated that more than 12 million people around the world enjoy the complex, strategic game of gathering resources (mana), summoning monsters (creatures) and casting spells (sorceries, instants and enchantments). Although dominated by male players in the competitive circuit, Magic: The Gathering's broader fan base is a testament to the game's ability to continually evolve and adapt to its audience.

At a more casual Magic event Merlyn's hosted about a month prior to the recent qualifier, the back section of the store holds a more varied mix, including high school- and even middle-aged players, along with a few female spell slingers. For the Pro Tour Qualifier, however, most contenders are male, between ages 18 and 35. 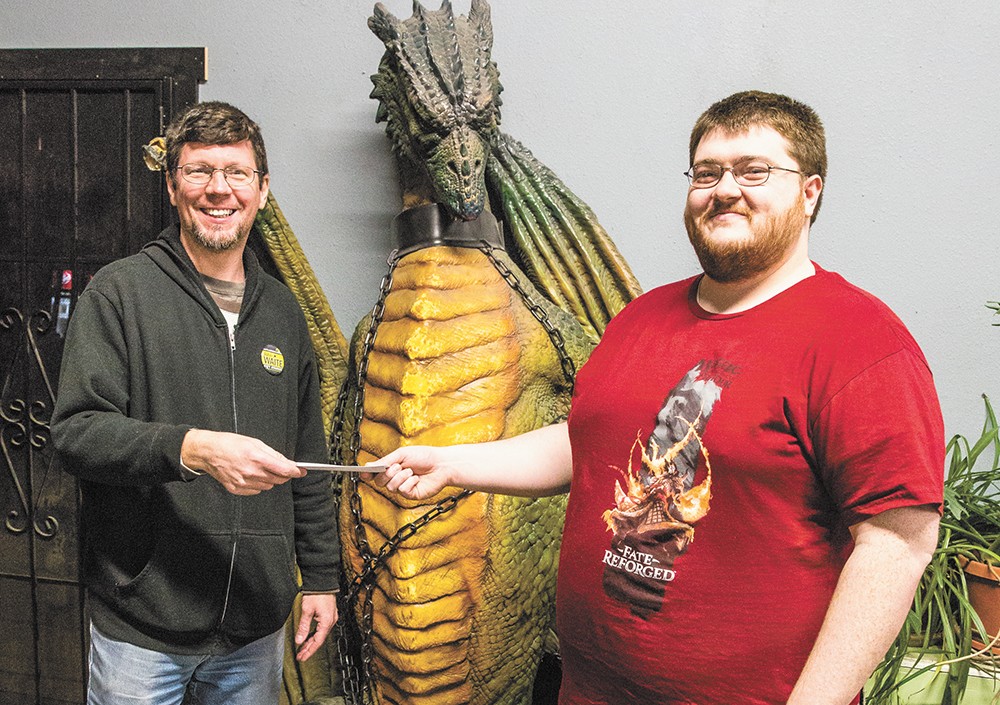 "I think a lot of it is the image thing," says Scott Harris, referring to common misconceptions of the game. Harris has worked at Merlyn's for three years and is an official Magic event judge and tournament organizer. He's been playing with his older brother, Steven (who also works at Merlyn's), since he was 7, not unlike many of his peers who grew up with it.

"When people don't know much about it, they think it's a nerd thing and only played by guys who live in their moms' basements, and there is definitely some judgment that girls aren't interested," he adds.

The game, launched back in 1993, has seen substantial growth over the past decade. In 2013, an open-registration tournament, the Grand Prix Las Vegas, set an attendance record of nearly 4,500 players for a single trading-card game tournament.

A major influence on Magic's growth, according to local players like Harris and Mound, is the digital age. With countless websites, social media accounts and YouTube channels devoted to breaking down the game's intricate card interactions, analyzing tournament-winning decks' card lists (with more than 13,500 unique cards and multiple play formats, deck construction is incredibly elaborate), as well as breaking down the complex rules of the game, learning about Magic has never been so accessible.

"I don't have time to look through the cards to build a winning deck, but I can take an idea of what is performing well and make my tweaks to it and play it from there," Mound says.

The secondary market for buying, selling and trading cards online also has hugely impacted the game's growth. Depending on rarity and market demand, Magic cards on the secondary market range from 10 cents to hundreds of dollars each. For players who seek to advance to the pro level, that means building a highly competitive deck is expensive — as much as $400 to $1,000.

At the daylong Pro Tour Qualifier at Merlyn's, players have come from near and far — the Lewis and Clark river valley, western Montana, even Portland — to test their skills. When the tourney is narrowed down to the top eight players, six are local guys.

"Spokane is one of the big havens for players, based on the amount of people in town who play Magic," Harris contends. The Inland Northwest's connections to the game are even deeper, since Magic creator Richard Garfield grew up in Oregon and later taught math at Whitman College in Walla Walla. Wizards of the Coast, the company that owns Magic, is also based near Seattle.

And with a multitude of game shops in the Spokane area — Merlyn's, Uncle's, the Comic Book Shop, Gamer's Haven and Direct Damage — Magic players at any level have numerous chances to play in higher-level tourneys, casual game nights and simply to join a passionate community of other players.

"I think a lot of people who come from playing other games are surprised by the community," Harris says. "There are a lot of people who go out of their way to be helpful. We're a friendly community as far as Magic communities. I've been to places where it's more cutthroat, but that isn't a problem we have locally." ♦