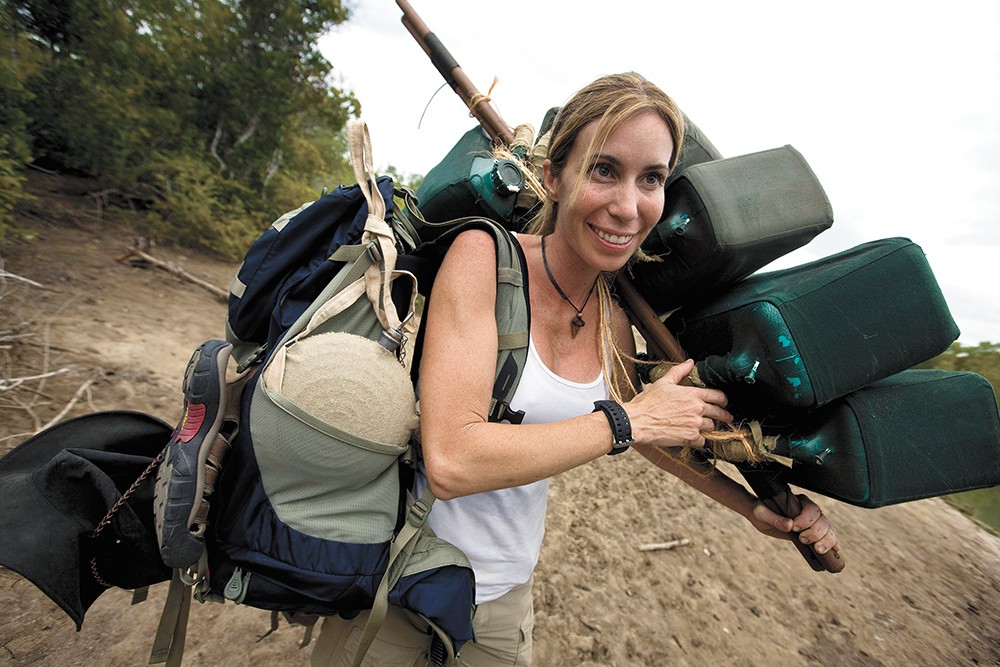 Mireya Mayor had it all figured out. She was going to be a lawyer.

After growing up in Miami the daughter of a Cuban immigrant single mom, she'd made her way to and almost through the University of Miami — partly by working as a Miami Dolphins cheerleader — and was getting ready to apply to law school. Double-majoring in English and philosophy, she found herself needing one class to fulfill a science requirement before she could graduate. She had a tight, highly organized schedule, and picked an anthropology class simply because it fit the one time slot she had available. It didn't really matter that she wasn't really sure what anthropology was.

"It changed the entire course of my life," Mayor says. "I read Gorillas in the Mist, and I watched the movie, and I remember sitting on my couch and that was my 'aha!' moment. That's when I decided that's what I wanted to do for the rest of my life, watching Dian Fossey cuddling these gorillas."

Just 22 at the time, Mayor put her writing skills to work on a grant that would fund a trip to South America to study some wild animals on the brink of extinction. And remarkably, Mayor says, despite the fact "I had never left the country, I didn't even have a passport, I had no camping experience," she was awarded the grant. "And off I went to the Amazon."

That first trip was the start of an illustrious career in which Mayor has gone from an almost-lawyer to become a Ph.D. in anthropology, the first female correspondent for Ultimate Explorer on National Geographic Television, an author and an explorer of life in jungles, rivers and oceans. Mayor will discuss her career at the first Nat Geo Live! event of the year Wednesday at the First Interstate Center for the Arts.

No doubt parts of her talk will focus on some of Mayor's noteworthy scientific feats, like discovering a new species of mouse lemur in Madagascar, a place she spends a significant amount of time every year. It's where she first made a scientific splash at the beginning of her career by tracking down two primates that had never been studied long term — Perrier's sifaka and the silky sifaka — after many renowned scientists had previously tried and failed.

That early effort was partly fueled by her early interest in primates thanks to Fossey's example, but more so that "so many of them were on the verge of extinction."

"The two I focused on primarily had never even been photographed," Mayor says. "So here were these two spectacular, closely related animals that were going to disappear ... and they were in dire need of help from becoming extinct. That's what really drew me in."

Even though she didn't necessarily know what anthropology was when she took that college class, Mayor was always an animal lover. She grew up in a big city and didn't have access to seeing wild deer or "all sorts of cool critters," she says. "I suppose I created my own wild space at home." That meant dogs and cats, a pet chicken, fish and assorted reptiles, including a snapping turtle that bit her grandmother once. "She tried to get rid of it," Mayor recalls, "but it came back to the house so they let me keep it."

Mayor credits the Miami zoo with stoking her love of animals, and inspiring a desire to travel and see the places where the wondrous wild animals lived in their native habitats.

Of course, Mayor's protective family wasn't particularly thrilled when she got that first grant to take off to the Amazon. Her mother, a registered nurse, was worried about the lack of medical attention and hospitals, not to mention the lack of communication she'd have with her daughter for months on end.

"She didn't want me to go, but in her own way she supported me because she ironed all my field pants" before Mayor left the country, she says with a laugh. Later, her mother was fully on board "once she started to see the documentaries I was doing for National Geographic, and she started to understand my love and passion for it."

In her talks for National Geographic Live!, Mayor hopes that passion comes through to the audience between stories of being charged by angry gorillas or chased by forest elephants. She'll talk about being a visitor to villages that have never seen an outsider, and being allowed to participate in tribal ceremonies where women have previously never been allowed.

"My hope is that people walk away a little more inspired than they came in, and have the realization they, too, can make a difference," Mayor says. "That everyone in the audience can make a difference on things that might seem very far away and different from them. Through the images I show and videos I show, that they come to fall in love with these magnificent creatures and the wonders of nature." ♦

The original print version of this article was headlined "Nature's Way"

Enjoy our ghost story? One of the experts we quoted is coming to town

By Kaitlyn Anson and Dan Nailen