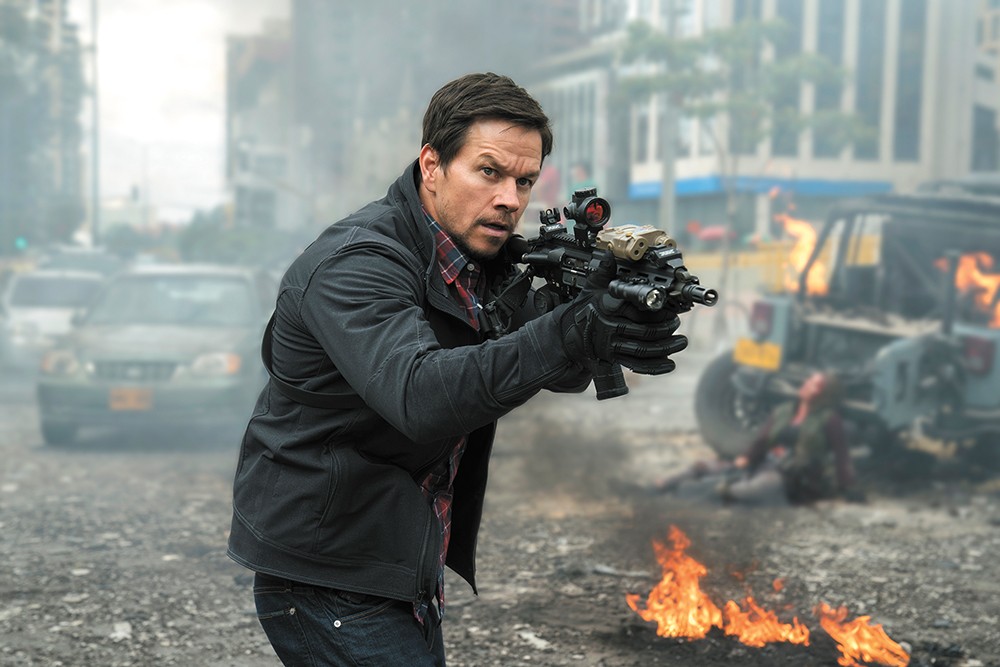 We're pretty sure Marky Mark is supposed to be the hero of Mile 22, so why is he so insufferable?

Peter Berg, director of good movies like Friday Night Lights and The Rundown, has fallen in with a bad crowd lately, and that crowd's name is Mark Wahlberg.

After an auspicious start with 2013's Lone Survivor, each of their subsequent collaborations — Deepwater Horizon, Patriots Day and now Mile 22 — has been worse than the one before it, culminating in this simple-minded, jingoistic celebration of violence that totally misuses Wahlberg's limited range of abilities.

Instead of playing a blue-collar everyman — which he's good at — Wahlberg plays Jimmy Silva, an insufferable snotbag who's smarter than everyone else (according to the life-story montage under the opening credits) and can't help being a snippy jerk to his underlings. Jimmy is a team leader for a secret tactical branch of the State Department that handles "sensitive" operations — i.e., ones that require more wanton murder than the public (or the Constitution) can stomach. In the pre-title sequence, Jimmy's team busts in on a suburban house full of Russian spies and, when things go awry, hurries to execute every last one of them before the police arrive, since this is all off-the-books. So it's like that.

Sixteen months later, Jimmy and company are working at the U.S. embassy in the capital city of a country in Southeast Asia that everyone conspicuously avoids naming ("our host country" and "the country we're in now" are two things I heard people say). A quantity of radioactive cesium is missing, possibly with the help of the corrupt local government, but one of their own — a police officer named Li Noor — shows up at the embassy declaring he knows where it is and will trade that information for asylum in the U.S.

Li Noor has been an informant before, and Jimmy's teammate Alice Kerr (Lauren Cohan) trusts him. The team (which also includes Ronda Rousey) is instructed by their boss, Bishop (John Malkovich in a terrible flattop), to get Li safely to the airport 22 miles away before any of the various people who want him dead catch him.

It should be relatively easy to make an entertaining action movie based on the premise of getting an important asset from point A to point B, but Berg and screenwriter Lea Carpenter blow it. The miscasting of Marky Mark as a supposedly deeply enigmatic egghead is the first mistake. I don't know if any actor could have played the role as written without being completely irritating (instead of a personality, he has idiosyncrasies like constantly snapping a rubber bracelet), but Wahlberg obviously can't.

Speaking of casting, Li Noor is played by Iko Uwais, the astonishing Indonesian fighter from The Raid: Redemption and The Raid 2. It was for those abilities that he was hired, of course, and he gets a few opportunities to kick henchman butt over the course of the film. But the rest of the violence — of which there is much, and Berg wallows in it, sometimes sadistically — is mostly undifferentiated gunfire and cruelty, shot and edited for maximum incoherence.

On top of all that is the distasteful and tone-deaf American arrogance at the heart of the film. Jimmy's secret squad operates outside the law according to "a higher form of patriotism" (which, not for nothing, is also what terrorists say), accountable to no one, free to blow up anything they need to wherever in the world they may be. The notion that military strength is what makes America great, while popular, is false, especially when that strength is exercised with such careless, short-sighted selfishness.

Mile 22 was very clearly intended to launch a franchise, but with a miscast know-it-all in the lead and a hostile ideology at its core, I'm not sure I'm interested in any further adventures.♦

Mile 22 is not showing in any theaters in the area.