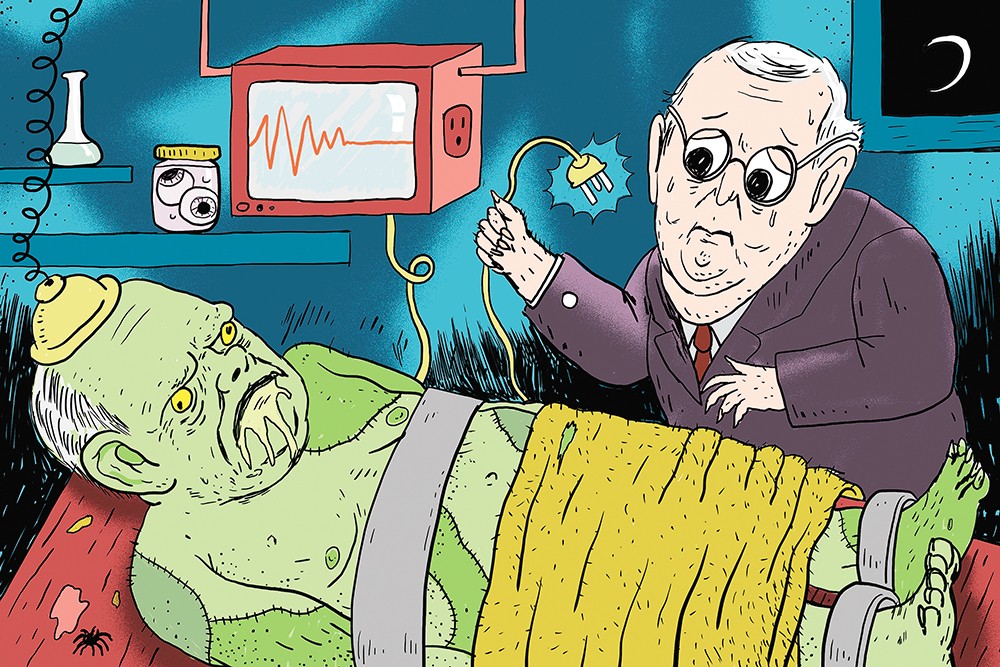 After a weekend of waffling, Senate Majority Leader Mitch McConnell

declared that he believed the women accusing Alabama Republican Senate nominee Roy Moore of improper sexual behavior with teenagers when he was in his 30s. Appropriately, he finally called for Moore to step aside.
click to enlarge

Did McConnell wait too long to declare what was obvious to anyone from a first reading of the Washington Post story that included multiple on-the-record statements and collaboration from others who were around at the time? Yes, he did. But I think the delay, if it was a brief mistake in the lust for political power, is forgivable.

(It's worth mentioning that most Seattle and many Washington state Democrats made the same error as accusations of child abuse by former Seattle Mayor Ed Murray accumulated. They took months to abandon him and they were wrong — but not irredeemably so, though many still owe the public an apology for their error.)

There's a case being made that McConnell also deserves a brief bit of recognition for forcefully opposing Moore's nomination. I'd agree, except that Roy Moore is the direct result of McConnell's politics. He is Mitch's Monster.

The tools of creation weren't as crude as Dr. Frankenstein's raided graves, but they were almost as disturbing. Nearly a decade ago, McConnell settled on a strategy of all-out opposition to any item proposed by Democrats, and especially President Obama.

The merits of any particular policy were irrelevant. It was a strategy based not on attacking what a policy did, but rather who proposed it. It was a cunning strategy that helped push Americans more squarely into "red" teams and "blue" teams and particularly mobilized McConnell's base.

Now don't get me wrong. Mitch McConnell didn't create partisanship, but he did come close to perfecting it. In such a system, an angry voter is preferable to a thoughtful one.

The result was that politicians' positions mattered less and less. Partisans were taught that it isn't what you stand for, but who you stand against; that is the criteria by which you should be judged. Working across the aisle to get something done was a cardinal sin.

The demonization of the opposition as evil, rather than merely misguided, led to increasingly radical primary challengers. At first, this was mostly fine with McConnell — especially when his agitated base proved motivated to reclaim the House and then the Senate. His strategy was appearing brilliant. Or in other words, "It's alive!!!"

But then the monsters began to turn on their creator. His conservative record no longer mattered. His association with D.C. alone was reason to send right-wing ideologues to remove him from power.

So Mitch began to turn on his monster, trying to balance keeping it alive, as it was a key accomplishment of his life and essential to his power. But now that the monster — reflected in Donald Trump and Roy Moore, among others — threatens to destroy McConnell, he's finally fighting back.

Mitch created a monster, then sought praise when he turned against it. But he only switched sides after that monster had harmed a lot of villagers, and finally became a threat to Mitch himself.

The moral of this story full of convoluted metaphors? When you demonize your opponents, you end up filling your own ranks with demons who may even devour you. The impact is most clearly seen in the Alabama GOP chairman who said he would support Moore, even if he was convicted of being a pedophile, rather than voting for a Democrat. That's insane, and yet too many believe what they've heard about Moore, but are still prepared to vote for him.

And while this is all playing out a few weeks past Halloween, I still find it a very scary story. ♦