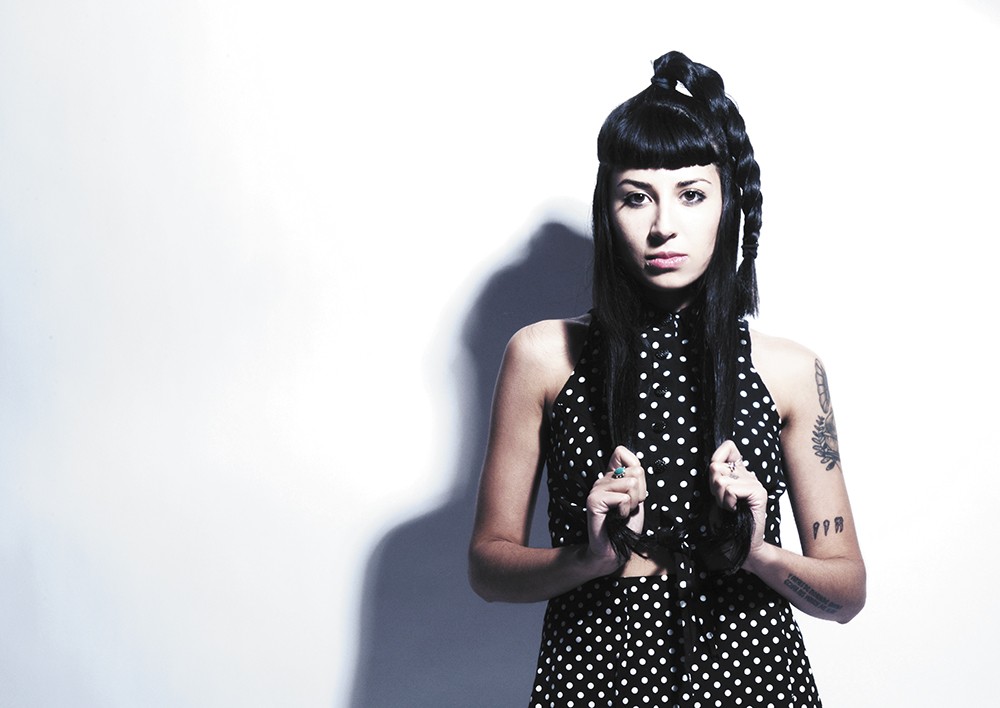 Jessica Hernandez and the Deltas play The Bartlett Dec. 18

The time slot was far from ideal.

Early Monday afternoon at Bumbershoot, the last gasp of the festival and hours before the day's headliners would draw more people to Seattle Center.

As the clock struck 2:45 pm, Jessica Hernandez and the Deltas took the Starbucks Stage to scattered applause from a few dozen people strewn across the lawn sunning themselves on a hot afternoon. Some drank beer. Others ate pizza. Most sat and chatted with friends, oblivious that it was showtime.

They wouldn't stay seated for long.

The hyperkinetic Hernandez and the musicians making up the Deltas launched a rock revue that turned the dozens into hundreds within a few songs. This was no retro thing a la Sharon Jones and the Dap-Kings, though. Rather, Hernandez and the Deltas offered a modern twist on their Detroit hometown's history of killer garage rock, R&B and soul. Horns and organs punctured the steamy air, intermingling with surf-guitar riffs and slithering rockabilly.

And then there was the Voice.

Hernandez has the kind of pipes that evoke comparisons to Adele, but you won't find that British soul sister stomping around in combat boots and a miniskirt, pounding a drum next to her spot at center stage. Listening to the band's full-length debut, Secret Evil, particularly its soaring ballads, you might imagine Hernandez as a demure presence. Watch her lead the Deltas through a set like she did on that balmy Monday, and you quickly realize she's anything but timid.

Hernandez's inner drive and childhood as the ringleader of a little brother and a bunch of younger male cousins make her utterly comfortable in pushing the Deltas to achieve the sounds in her head. It's a role that fits, and she laughs easily in talking about life on the road with a bunch of boys in a van.

"They'll tell you I'm a pretty bossy person," Hernandez says. "I'm definitely 'Type A.' I've always had that thing in me, and the guys and I are all close and we have that brother/sister relationship, a trust and a playfulness. Even on the worst days, it's like a family fight. Like, 'Alright, you're being an idiot. Stop chewing with your mouth open.' And then the fight's over."

The band's relationship has grown organically through the past few years, after Hernandez returned to Detroit and started playing solo acoustic shows after spending a couple of years in fashion school in Chicago. Wanting to beef up her sound and tour a bit, she started recruiting musicians she knew had the musical chops to bounce across genres as her songwriting required, and be fun to hang with as well.

As the band solidified and Hernandez began making noise on the local Detroit scene, her songwriting evolved naturally toward the strengths of the band. She can tell the difference on the songs filling Secret Evil.

"That's kind of why the record feels a little all over the place," Hernandez says. "Half the songs were written before I started playing with them, and half after. And even though I wasn't writing with them (on the newer songs), I had in mind, 'OK, I have a brass section. I have an organ player.' And I'd write differently."

The results speak for themselves. Secret Evil is a thrilling debut that promises great things in the future. Songs like "Sorry I Stole Your Man" offer girl-group doo-wop, "Dead Brains" throbs with funky bass, and ballads like "Neck Tattoo" and "Lovers First" showcase Hernandez's considerable vocal skills. Lyrically, too, the songs are delivered from a strong female point of view too lacking in much of modern pop.

That strength comes from her roots in Detroit, a city with as musically rich a history as any in America, between the punk of MC5 and the Stooges, Motown's soul acts, the shock-rock of Alice Cooper and the modern garage scene that spawned the White Stripes. While the city has struggled economically, the art and music scene is still thriving, Hernandez says, and is a tight-knit community full of "really creative types."

Consider Hernandez one of them. Judging from her entertaining videos and her performance at Bumbershoot, it's clear she cares about the visual aspect of her band as well as the sound. She aspires to be the complete package she sees in her own favorite artists like Tom Waits or Gogol Bordello.

"For me, music has always gone hand in hand with fashion and performance," Hernandez says. "All my favorite performers have these weird theatrics to them. I think about Tom Waits, he's like a manly dude, but he's a theater guy. He's a performer who has this whole darkness to his stage persona.

"You want everything people are seeing to match what they're hearing. You want it to be one complete package, giving your audience something cool to experience."

Hernandez and the Deltas might be young, but they have that part down. ♦