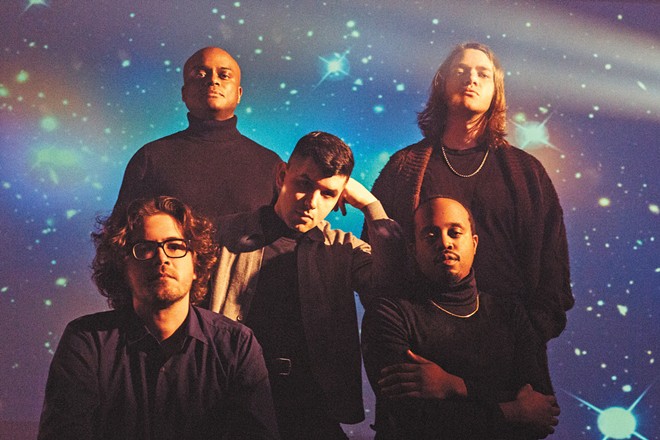 Ebru Yildiz photo
Durand Jones and the Indications get cosmic on new LP.

Music has the power to transport the listener to a place where their anxious inner voice is reduced to background noise and everyday troubles melt away, and sometimes musicians wield this power intentionally.

As suggested by its title, Private Space — the latest album by classic soul revivalists Durand Jones and The Indications — is designed as a personal escape, an opportunity to put needle to vinyl and get lost somewhere that isn't being rampaged by viruses and wildfires and cable TV news personalities. It's a welcome respite.

But even on a record that's mostly about getting lost in the music and moment, it's 2021, so there's an up-front acknowledgement that terrible events are unfolding that cannot be ignored. The slow and sexy album opener "Love Will Work It Out," featuring an ultra-smooth vocal performance by Jones, references both the weight of the Covid-19 pandemic and the struggle for racial equality in the U.S.

"Folks overtaken by disease / All the people lost made me fall right down to my knees," he sings on one verse. On another: "I got so down being alone / Watching modern day lynchings in the streets that I called home." Jones muses that in both instances, love is the answer: "I knew I had to trust the faith that love would work it out."

The Indications formed in the early 2010s after Jones, drummer Aaron Frazer and guitarist Blake Rhein bonded over their shared interest of oldies as students at the University of Indiana's Jacobs School of Music. After releasing its self-titled debut album in 2016, the group attracted national attention with the dreamy, slow-dancey single "Is It Any Wonder," featuring a hair-raising vocal performance by Frazer, the drummer with horn-rimmed glasses and an angelic falsetto.

Emphasizing vocal melody and harmony and displaying the sensibility of classic record collectors, the group followed up with 2019 record American Love Call, having established itself as a successful touring outfit with an especially strong following among the Chicano lowrider community in Los Angeles.

Durand Jones and The Indications is bringing its message of love to Riverfront Pavilion on Wednesday, Sept. 29, in what promises to be an evening of throwback influences, super-tight vocal harmonies and generally positive vibes.

The group will perform in support of veteran rock outfit My Morning Jacket, which is touring its first album in six years, Regularly Scheduled Programming, and recently dropped a groovy, psyched-out single, "Love Love Love." The track comes complete with very Beatles-like vocal hooks, a fuzzy guitar freakout in the manner of George Harrison and a timely reminder from My Morning Jacket frontman Jim James to love each other and generally pay it forward: "The more you give, yeah / The more you get, now."

Both outfits proudly display their decades-old influences and easily weave them through their original music. Private Space finds The Indications working with a slightly different sound palette than before, with more swinging rhythms boogying into the mix. Here the group dabbles for the first time with elements of funk and disco, from the Nile Rodgers-esque chic funk guitar rhythm on "The Way That I Do" to the glittery-sounding synthesizer that kicks off lead single and instant roller rink classic, "Witchoo."

Private Space doesn't represent a big systlistic stretch, however. The old-school vibes that have been so integral to The Indications' success are still present in this distinctly modern production, as the group once again pulls old sounds into the present — and doesn't ignore the moment's darker realities.

On the final track, "I Can See," Frazer laments that the world is "looking so tired today," full of empty branches and gray skies. But he reaches a similar conclusion as his musical partner, Jones, on the album's opening song: Love and hope are the answer. In his sweet falsetto, he sings, "But the darkness of night / Gives way to new light." ♦

New art in Riverfront Park, Inside the Mind of a Con Artist; plus, new music!