For the county, the Spokane Raceway bill has gone from zero to $6 million in two years — is it worth it? 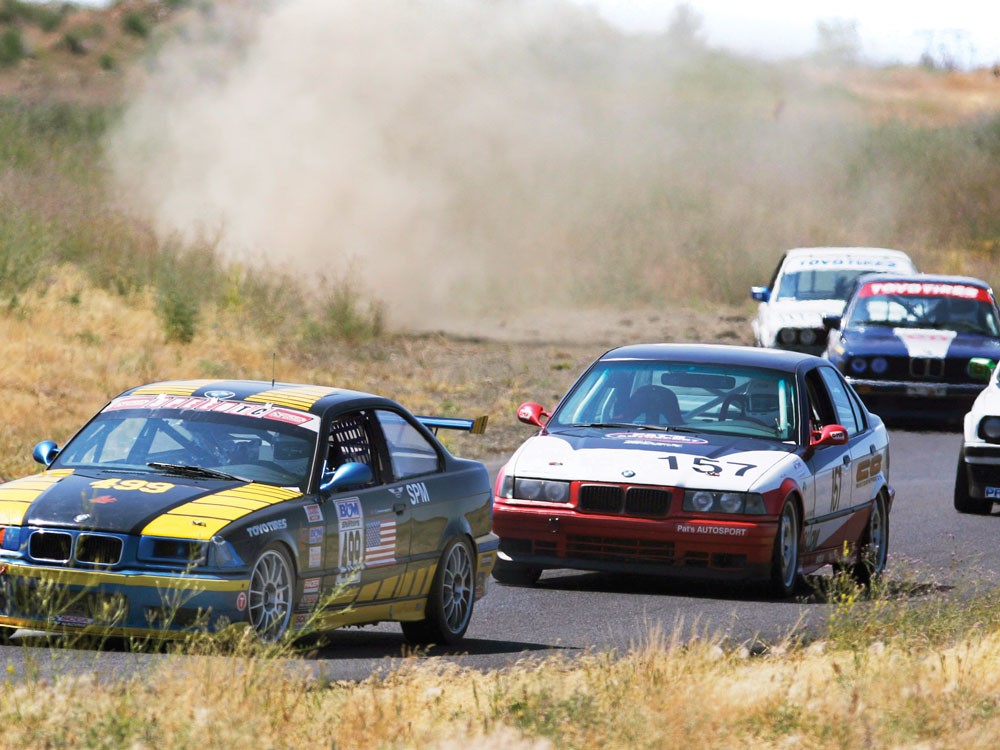 Cole Hooper, a young boy at the Spokane County Raceway drag strip, is equipped with flame-embellished earplugs to help muffle engine screams. Speedsters with names like “The Reaper” and “Cobra Jet” and “Gorjus Green” rocket down the strip in a cloud of dust and exhaust as Cole and his dad look on.

Just a few weeks ago, these stands were filled with 5,000 people.

“It’s magic actually, when the place is full,” says Cindy Gibbs, the newest manager. “You’ve got the smell of burning rubber and fuel in the air and nitro-methane.”

She smiles. Those are good smells.

But the raceway, composed of a drag strip, an oval and a 2.5-mile race course, has been under two years of substantial public scrutiny.

Want to vote for a candidate in the next election who supported the decision to purchase the racetrack? You can’t. Democrat Bonnie Mager, who’s the only commissioner facing re-election, called the decision to buy it “totally irresponsible.”

Last September, the Journal of Business quoted her opponent, Al French, as saying the county’s purchase of the track was “a good overall move.” But during the recent primary, he was sending out negative campaign flyers accusing fellow Republican candidates of not being as opposed to the raceway as he was. Today, French says he wants to eventually sell the facility and part of the land.

The track cost the county $4.5 million to buy. Add on maintenance, planning, safety and future utility improvements, and that bill after next year will roll up to $7 million.

The raceway operators — and the two commissioners who voted to purchase it, Mark Richard and Todd Mielke — argue it’s worth the money.

Currently, the county will receive $65,000 from the raceway’s rent payments each year, and 10 percent of every dollar over $1.5 million the raceway earns.

So unless that raceway starts making more than $1.5 million a year, it would take more than 107 years to over the cost so far. Instead, the cost will be paid across 20 years through current real estate excise and car rental taxes.

In the meantime, the raceway fights against the problems of the past. There’s a reason the raceway uses phrases like “It’s a new day” and calls itself the new raceway, Gibbs says. “There’s a 35-year reputation,” she says.

The approximate cost of the Spokane County Raceway (thus far)

Total: $5.9 million (future water and sewer improvements will cost another $1 million, bringing the total to around $7 million.)
Revenue generated for the county by the raceway by the end of 2010: $264,000

Since the 1970s, the track was run by Orville Moe, who was later sued by his investors — who never saw a return on their investment — alleging everything from fraud to underreporting gate receipts. The property was auctioned to the county.

Bucky Austin, the man tapped by the county to run the track, failed to pay contractors for improvements to the track. He was fired, leaving the county’s insurance to pay for the $1.2 million in contractor liens against Austin.

Enter the new operators. Charlie Allen has run the Firebird International Speedway in Arizona since 1983. Ron Hodgson is part owner of the Castrol Raceway in Edmonton, Alberta. Both are successful raceways.

“It’s a winning combination. The county knows that,” Gibbs says. “Now we need the seat time to prove that.”

The county had no expertise in the world of racing. So before purchasing, they paid Baskervill Motorsports Design about $37,500 to conduct a feasibility study.

The researchers criticized the sorry state of the park’s condition, but left impressed with the support the track received from the racing community. It even quotes a fortune cookie — “An Outstanding Opportunity Will Soon Present Itself to You”— found at a downtown restaurant during the researchers’ stay in Spokane.

“Our economic analysis indicates that the track could be operated in the black for all years,” according to the report. “We were unable to find anyone anxious to see the facility closed!”

But Bonnie Mager finished reading the study with serious doubts the raceway could ever hope to pay for the cost of the purchase. Worse was the discovery that one of the racetrack wells had been contaminated with a plume of trichloroethylene. The scope of the contamination is still unknown.

“At that point it was a no-brainer,” Mager says. “I would not buy a piece of contaminated property with no knowledge of how much it would cost to clean it up.”

Richard, however, maintains that 125 percent of the entire cost of the contamination cleanup, no matter how expensive, would be covered by the previous owner of the raceway as part of the purchase agreement. He thinks no one but the county would have preserved the racing facilities for long.

“More and more issues keep coming up,” Mager says, referring to the need to realign the track for safety reasons. “It’s becoming kind of a money pit.”

In her months of election doorbelling, she says, most voters have not been happy with the raceway decision.

Beyond the County Coffers

The benefits of the raceway, supporters argue, go far beyond the yearly rent.

“If I do a good job, and create a lot of good events, the county is going to benefit from that,” says Allen, one of the operators. “I’m talking about all the businesses in the county: restaurants, hotels, airlines, rent-a-cars, cleaners.”

For a major event, Richard says, 70 percent of the attendees come from out of town.

An economic impact study of the Portland International Raceway generated $45 million a year in the Multnomah County region, which is about double the population of Spokane County.

One weekend of racing, the feasibility study estimated, could produce 4,000 visitors, who would spend more than $500,000. Gibbs expects six major events at the facility next year, including a monster truck event.

“When I was 20, years ago, we used to do this in town,” Jeff Hooper, a racing fan, says, motioning toward the drag racing below. “We had a stretch of road out in a small town in Oregon.”

There’s another angle Mark Richard is pushing: That the raceway saves lives by channeling racing into safe arenas instead of the streets.

For $15 on Friday nights, anyone can bring any car to drag race under safe conditions.

“It’s a basic need for speed. Human nature,” Gibbs says. “We had over 120 racecars out there last night.”

Mielke pushes a sheet of notebook paper across the table. He’s drawn a grid comparing the raceway to the Southside Family Aquatic Center. Both will cost around $7 million.

So why all the anger over the raceway and not the aquatic center?

“I think it’s the issue of, it’s not their [preferred form of] recreation,” Mielke says. Some people prefer, say, fairways to speedways.

But Mager says her continued opposition is about fiscal responsibility, about not continuing to throw money at a shaky investment.

“You have to stop the bleeding,” Mager says.