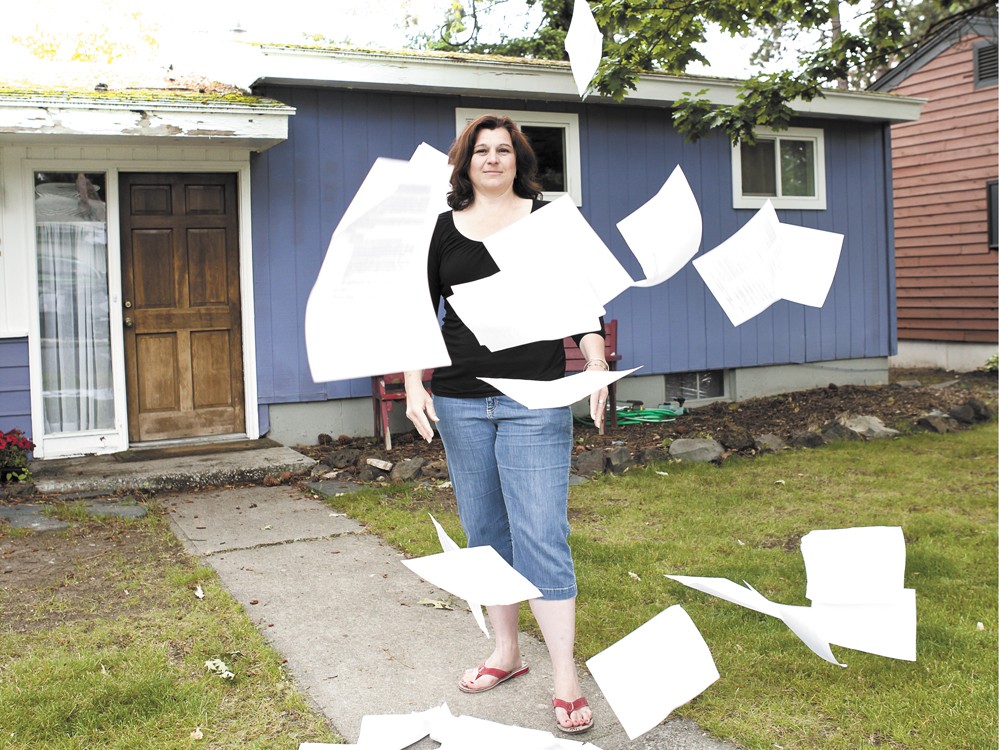 Stephen Schlange
Alexa Young hopes SNAP can help save her from foreclosure and endless legal paperwork.
Alexa Young is losing her will to fight. She’s trying for a third time to strike a deal with her bank, and she knows that she may be forced to sell her house.

“It would be pretty tough,” she says of leaving her north Spokane neighborhood. Her dad lives a block away and her two sons know 18 other kids in the area. “But it is what it is. After a while, they just wear you down.”

After a divorce and medical problems in 2008, Young, 42, got a three-month forbearance from her bank. She thought that meant she had those months paymentfree to catch up on her other bills, and that those months’ payments would be moved to the end of her mortgage. But when the bank billed her for all three months at once — about $6,000 — she couldn’t pay and missed a payment for the first time ever.

She turned to SNAP, a Spokane nonprofit, for help and she’s now working with an attorney there in hopes of restarting her payments and avoiding foreclosure.

SNAP, which offers free loan counseling and legal help, among other services, is hoping it will soon be able to help even more people — with money from five of the nation’s largest banks.

As part of a massive mortgage settlement between the banks and attorneys general from 49 states and the District of Columbia, states received multimillion-dollar payouts. To allocate Washington’s $54.2 million, the state Attorney General’s Office has formed a committee of legislators, attorneys and representatives from housing and financial groups to dole out the funds to nonprofits working on foreclosure issues. SNAP plans to apply for some of that cash.

Foreclosure rates across the country
slowed at the end of last year as banks
negotiated the settlement, but they’ve
ticked back up since the deal was struck.
Nationally, about 1.4 million homes are
currently in the foreclosure process —
about 18,000 of them in Washington and
fewer than 6,000 in Idaho. In May, 2,445
Washington homes received foreclosure
filings — notices of payment default,
auction or bank repossession — and 128 of
them were in Spokane County, according
to RealtyTrac Inc.

The deal stretches back to 2010, when the states sued the banks for illegal lending practices, like signing foreclosure documents without a notary present. The settlement, finalized this April, outlines how $26 billion will be distributed: some as credits to banks for “relief to borrowers,” some as direct payments to homeowners and the rest in payments to states.

In the big picture, the payments to the states are small — just $2.5 billion of the total $26 billion — but federal officials have praised the deal as relief for suffering homeowners and an important step for preventing future foreclosures.

The settlement encouraged (but didn’t require) states to use their funds for education or financial assistance programs that would help offset the effects of foreclosure or prevent foreclosures from happening in the future.

States like California and Arizona, both hard hit by the foreclosure crisis, have come under fire for sending part or all of their payouts into the state’s general funds to plug budget holes. Georgia is using its money for programs to help attract new businesses; Missouri’s will go mostly toward higher education. Idaho got $13.3 million, and legislators sent most of it to the state’s general fund.

Washington Assistant Attorney General Dave Huey says states that send the money to the general fund could face problems in the future. Arizona lawmakers, for instance, are awaiting a judge’s ruling on the legality of using the money to balance the state’s budget.

“We’re doing it the way the settlement provides — the way it was intended,” Huey says. “My personal view is that states that just turn over the money to the Legislature for the general fund are certainly violating the spirit of the agreement and may be violating the letter of the agreement.”

Huey was Washington’s lead negotiator in the settlement and helped to form the Washington Consumer Foreclosure Remedies Fund Committee, which will select which groups receive the grants. The process is open to nonprofits, tribal organizations and local, county or state government groups that work on housing counseling, mediation or foreclosure assistance. Applications are due at the end of the month.

They’re looking for the groups that’ll make the most impact for people in the hardest hit areas of the state. Since Eastern Washington escaped some of the harshest effects of the foreclosure crisis, most of the money may end up going to groups from the west side, Huey says.

“Certainly any proposal from a group in Spokane or Yakima would get full consideration,” he says. “The committee has their discretion, but one of the things they should look at is how hard hit a particular area is.”

Majken Ryherd, a lobbyist whose been working on behalf of Washington’s Statewide Poverty Action Network who’s one of the committee members, says her priority is finding programs that empower consumers.

“Can we catch people farther upstream so they don’t even get into this crisis?” she says.

The Poverty Action Network supports poverty-fighting programs across the state, including efforts to protect borrowers from bad lending practices. She says it’s “tragic” that some states have diverted funds to their general budget.

“These practices were wrong and consumers should be righted,” she says.

The Idaho Legislature allocated $500,000 — just less than 4 percent — of its total $13.3 million to nonprofits and put the rest in its general fund. Idaho State Representative Wendy Jaquet, D-Ketchum, who sponsored the bill that divvied up the money, says that’s because the state’s budget has been hit hard.

“The idea was that many revenue streams have suffered because of the foreclosure crisis,” she says, using sales tax as an example. “Some of the guidelines [about how states should spend the money] talked about the public good. In my mind the public good was for everybody, not just the folks who’d been foreclosed on. They were getting assistance in many ways.”

But State Representative Judy Boyle, R-Midvale, was upset that money went to the general fund, which she calls a “huge black hole.”

“The people who lost their homes by far lost the most, not the general fund,” Boyle says. “It’s a fairness issue.”

Back in Spokane, SNAP’s housing counselor and program manager, Monica Lloyd, says the grants could be crucial for groups like hers to continue meeting the needs of people facing foreclosure. Many of the people she counsels are between the ages of 45 and 60, she says, which means they’ve often lived in their homes for a long time without ever having to face the possibility of foreclosure.

“People who’ve never been in this situation before are finding themselves in this,” Lloyd says. “This is not about a certain area of town or a certain economic group. Everyone is being affected.”

When people learn they might lose their home, SNAP is ready to try to prevent foreclosure