Where the young meet the old meet the college students. 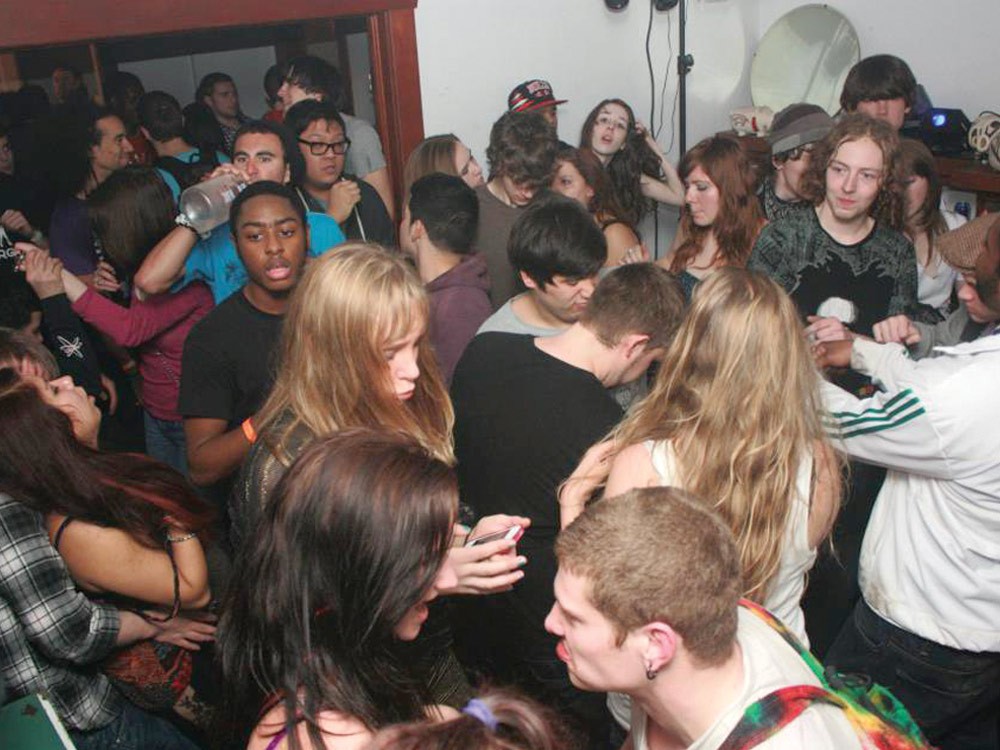 Getting down electo style at Pullman\'s LaserMob dance party series.

College towns can be awesome, what with all the intellectuals and burgeoning talent crammed into such a small area. But these are also the sorts of towns that feature a sizable population of individuals who are still learning what happens when they put alcohol in their bodies. It can be a steep learning curve.

All this has a certain effect on a place. Among other things, it breeds a throbbing nightlife full of bars with strong, cheap drinks and parties that rage into the wee hours.

Head out on the town in Moscow and Pullman and you’ll likely find all of these things. But in very different ways.

Pullman can be divided into three main drinking zones. There’s the College Hill neighborhood and downtown, but then there’s what can aptly be described as the “nether regions” of Pullman. This is where you want to start the evening. Always.

The nether regions are not convenient to get to by Pullman standards, but this only makes them work harder for your love.

Case in point, the Denny’s (1170 Bishop Blvd.) in Pullman holds perhaps the area’s best-kept secret. Not only does the family-friendly restaurant known for pancakes and Shirley Temples have a bar, but the booze there is cheap. Stupid-cheap. Shots will set you back $1 each and a pitcher of beer, $3. Those are the actual 2012 prices. Coincidentally, this Denny’s is directly across the street from the hospital.

“I honestly couldn’t tell you [why the drinks are so cheap],” says assistant manager Matt Weishaar. “I’ve wondered that ever since I was 21.”

The downtowns of Pullman and Moscow are consistent they serve up the standard drinks at standard prices and feature standard entertainment.

But remember, you can always do more, because college towns are magical places filled with endless adventure. This is especially true for the College Hill Neighborhood.

Here, students pack into historical homes dating to the early 1900s, around the time when WSU was still called the State College of Washington and the official school colors were light pink and baby blue.

The party scene up here runs strong. Like a wild boar.

Here’s an example: Every Saturday night you can find an installment of what has become known as the LaserMob (facebook.com/lasermob) rave series. Held at a new venue each week, the raves pack students into private homes and feature as many as 10 DJs spinning what the college bars don’t or won’t. A tall kid was twirling two glowsticks in the corner of a recent LaserMob party, his hands shuffling fast to booming dubstep, his afro swaying a second behind the motions of his body.

“I don’t want to go to the bars and spend a lot of money,” says the kid, a 22-year old digital technology and culture major who tells us his name is Jesse James and pays no attention to a guy hanging from the rafters next to him. “I don’t even have to drink or do drugs we just have good music.”

The scene here is more akin to the one in Moscow, which, in many ways, couldn’t be more different than Pullman. Just eight miles from Pullman, Moscow has a way more chill vibe. A town-town, not just a college town. The antics of the youth aren’t quite as prominent here, and nightlife is pretty concentrated downtown.

Live music is always going on at local favorite John’s Alley (114 E. Sixth St.), and Main Street features a slew of bars, from the dance club feel of CJ’s (112 N. Main St.) to the quiet coziness of the Garden Lounge (313 S. Main St.). If you’re looking for a nice evening, come to Moscow.

Otherwise, a $1 shot of Potter’s Whiskey and some glowsticks await you in Pullman.

...SNEAK A DRINK AT SCHOOL

WSU did its students a solid by allowing the opening of Dupus Boomer’s (WSU Compton Union Building) on campus. A menu with 44 martinis and 44 rotating beer taps is nice, too. And manager/bartender Travis Peterson can whip you up his favorite, a drink called the Baltimore Zoo. It’s like wow. So strong.

...MAKE OUT ON SOME PLAYGROUND EQUIPMENT

Try downtown Pullman’s Reaney Park (700 NE Reaney Way). It’s secluded and also has a creek nearby. Like, so romantic.

...PRESERVE WILDLIFE WHILE GETTING YOUR DRINK ON

The Plantation (2012 S. Main St., Moscow) is as awesome as only a place constructed out of old CCC bunkers could be. It’s got everything pool, shuffleboard, dancing, karaoke, cheap food and drinks, and a hick vibe like no other. But it also has a philanthropic beer tap proceeds go to the Rocky Mountain Elk Foundation.

...ACCIDENTALLY WIND UP DANCING ON A STRIPPER POLE

With a giant brass bunny statue and weird glow-in-the-dark paint and pool and dancing, CJ’s Nightclub (112 N. Main St., Moscow) doesn’t know what it is, but it’s great. Upstairs is a legit ballroom, and downstairs anything goes.

...GET FRISKY AND DO GRAFFITI

The college bar in town, The Coug (900 NE Colorado St., Pullman) is famous for its loose/non-existent policy concerning writing on the walls. Grab a Sharpie and have at ’em.