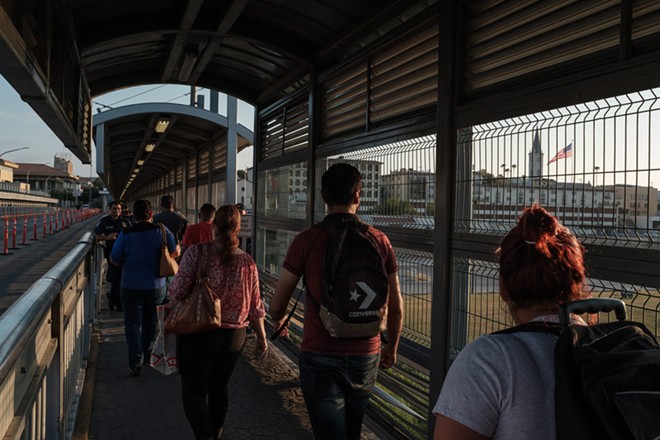 Luis Antonio Rojas/The New York Times
People cross the international bridge from Nuevo Laredo, Mexico to Laredo, Texas, July 10, 2019. Most migrants who travel by land to enter the United States from the Mexican border will be denied asylum protections according to plans the Trump administration announced July 15. The new rule was expected to be immediately challenged in court.
By Zolan Kanno-Youngs
New York Times News Service

WASHINGTON — Most migrants who travel by land to enter the United States from the Mexican border will be denied asylum protections according to plans the Trump administration announced Monday. The new rule was expected to be immediately challenged in court.

The rule goes into effect Tuesday. It is one of the broadest attempts by the Trump administration to restrict asylum, and was announced after the president of Guatemala backed out of a meeting at the White House that had been set for Monday to discuss a similar policy.

Under the plan, migrants who failed to apply for asylum in the first country they passed through on their way to the southwest border of the United States would not be protected. It would significantly affect a majority of asylum-seeking Central American families who are fleeing persecution and poverty who have tried to enter the United States at its southwest border in record-high numbers this year.

The administration has for weeks been pushing Guatemala’s government to sign a “safe third country” agreement, which would require Hondurans and Salvadorans to apply for asylum in Guatemala instead of applying for protections in the United States.

“The Trump administration is trying to unilaterally reverse our country’s legal and moral commitment to protect those fleeing danger,” Gelernt said in a statement. “This new rule is patently unlawful and we will sue swiftly.”

The rule would effectively limit asylum protections to Mexicans and those who cross the United States’ southwest border by sea.

Migrants would still be allowed to apply for asylum at the southwest border if they have proof that they applied and were denied the protections in at least one country they traveled through.

Those who can demonstrate they were a “victim of a severe form of trafficking,” will also be allowed to apply for asylum, according to a statement by the Department of Homeland Security.

“This rule is a lawful exercise of authority provided by Congress to restrict eligibility for asylum,” said Attorney General William Barr. “The United States is a generous country but is being completely overwhelmed by the burdens associated with apprehending and processing hundreds of thousands of aliens along the southern border.”